The Jeff Koons exhibition, entitled with the single word ‘NOW’, is the latest exhibition to be presented in Damien Hirst’s Newport Street Gallery, a series of beautiful spaces designed by architects Caruso St John. There is, in fact no nicer space for showing contemporary art now available in London. It knocks spots off (no pun intended) pretty well all the alternatives, including those available at Tate Modern. As with the first show, devoted to the work of John Hoyland, all the works shown (with the exception of two) come from Hirst’s own collection.

The fact that he began his Newport Street enterprise with someone other than Koons shows how tactically smart Hirst is. Koons and Hirst go together in the upper reaches of the contemporary art world like eggs and bacon. No Archibald, not Bacon! How can you be so silly! Though admittedly the price-levels at the big auctions seem to match. 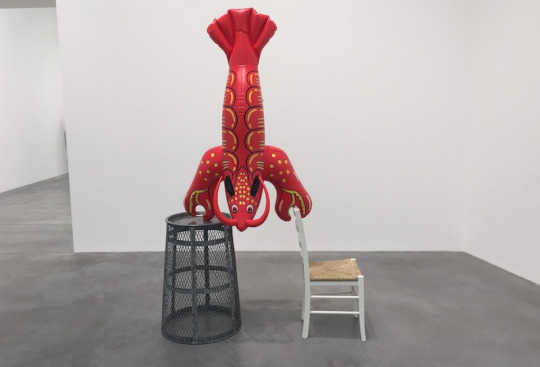 If Hirst had chosen to kick things off with this tribute to his American brother-in-arms, many would have seen it as a rather crude attempt to prop up his own brand, currently faltering a little, while that of Koons sails on regardless.

The exhibition press release, quoting a once very influential former person, instructs us how we are meant to think about it: “Summarised by curator and critic Norman Rosenthal as “manifestations of a joyful acceptance of American culture”, Koons’s work – which here fills Newport Street’s six, expansive galleries – challenges and teases in equal measure, reflecting equally on the profundities of our existence as on the beauty and banality of the now. As Hirst states: “The thing I love about Jeff’s work is that it’s contemporary, it’s here, it’s today.” 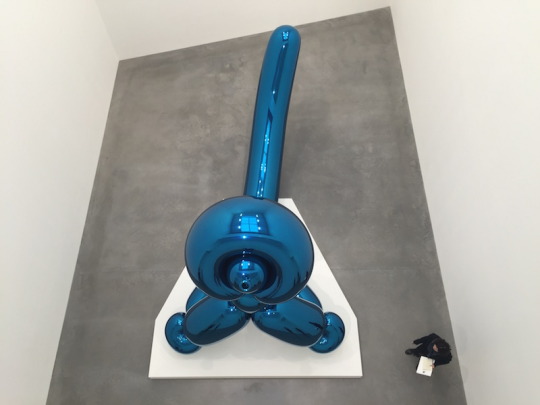 Some of this is true, not always in quite the sense that Hirst and his spokesman Norman Rosenthal would like, and some of it isn’t. In present circumstances, Koons’ work is starting to look just a tad passé. And anything resembling profundity is pretty hard to find. Which is not to say that there aren’t works that make an impact. The huge shiny bright blue Balloon Monkey that occupies a double-height space is certainly a ‘Wow!’ object – a heart-felt tribute to the banality of contemporary aesthetics that somehow seduces you into sharing the artist’s relish for the vacuity and vulgarity of much of our Western late-phase capitalist culture. The same can be said for Acrobat, a giant-sized lobster doing a hand-stand, one claw on a kitchen chair and the other on an up-turned trash basket. Other things are pretty drear. One quickly tires of post-Duchampian efforts such as the Hoover floor-polishers in vitrines or the basket-balls floating in tanks of distilled water. The paintings, in particular, all of them executed by hands other than those of the artist, are universally dispiriting. Particularly so the two canvases illustrating Koons’ one-time relationship to the Italian porn-star Ilona ‘Cicciolina’ Staller. If you want that kind of erotica, go look for it on the Web. You will, without difficulty, find any number of exactly similar images. And if you then want porn-on-the-wall, blow those images up using ever-amenable Photoshop and take the files off to one of any number of commercial print shops, here in London and elsewhere. Just tell them how big. Why pay big bucks for what you can so easily create for yourself? This is one reason why Koons is starting to look passé. In a technological age, technology is outstripping him. Today – right NOW – we can all be big Jeff, for parts of his product line at least, if that’s how the fancy takes us.

To mark the opening of the new exhibition, Newport Street Gallery will launch its new ‘Summer Lates’ opening hours, which will see the gallery remaining open until 10pm every Saturday from this weekend (21st May).