Jim Dine, the American pop artist (born 1935) has unveiled a new exhibition of his latest works on paper at Alan Cristea in London. Working in several printmaking disciplines, Dine approaches the works as a series of one-offs rather than as a traditional edition, keeping to a maximum print run of 10.  Many of the works are monotypes that have then been overpainted to build up painterly layers on the works on paper and one is actually on canvas. Familiar themes are visited such as his lifelong commitment to poetry and of course his trademark hearts. This is a feel good exhibition with depth, emotive expression and a master’s understanding of colour and composition.

Dine is sometimes referred to as a part of the Neo-Dada movement and a pioneer of performance art. He is one of the better-known names to emerge out of New York in the early 1960s. His Happenings performed alongside Claes Oldenburg and Allan Kaprow with musician John Cage were early ‘chaotic performance art’ pieces that came in a stark contrast with the more somber mood of the Abstract Expressionists popular in the New York art world in the mid 20th century.

“My most elaborate work, called ‘Car Crash’, was a cacophony of sounds and words spoken by a great white Venus with animal grunts and howls by me.”

In 1962 Dine’s work was included, along with Roy Lichtenstein, Andy Warhol, Robert Dowd, Phillip Hefferton, Joe Goode, Edward Ruscha, and Wayne Thiebaud, in the ground-breaking ‘New Painting of Common Objects’, curated by Walter Hopps at the Norton Simon Museum. This exhibition is historically considered one of the first “Pop Art” exhibitions in America. These painters started a movement, in a time of social unrest, which shocked America and the art world. The Pop Art movement fundamentally altered the nature of modern art.

In the early 1960s, he began attaching objects, particular tools of autobiographical significance, to his canvases, which incorporated paint cans, paint brushes, a screwdriver, and wood. These provided commercial as well as a critical success but left Dine unsatisfied.

In September 1966 police raided an exhibition of his work displayed at Robert Fraser’s iconic gallery in London. Twenty of his works were seized and Fraser was charged under the Obscene Publications Act of 1959, Dine’s work was found to be indecent but not obscene and Fraser was fined 20 guineas. The following year Dine moved to London and continued to be represented by Fraser, spending the next four years developing his art. 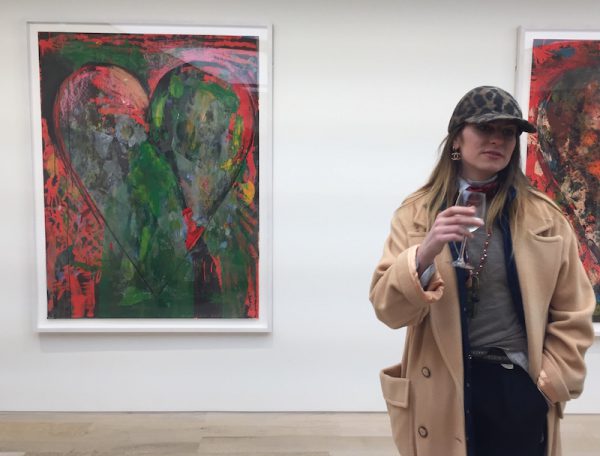 Poet Singing includes eight new, previously unseen prints depicting singing poets. Made over the past 12 months with master printmakers in Austria, Paris and the US, these works highlight Dine’s status as a renowned poet, as well as painter and printmaker. The singing poets will be shown alongside works dating from 2013 to 2016, including a recent series of large abstract prints, as well as examples of Dine’s continued fascination with Pinocchio and his reinvention of the iconic motifs of hearts, bathrobes, and Venuses.

Dine’s first meeting with poetry was through the work of Dylan Thomas, when aged nineteen, in 1954, his sculpture professor played a recording of the seminal Welsh poet. Dine cites the great American poets, Ron Padgett, Robert Creeley and Ted Berrigan, of the New York School as early inspirations. By 1959 Dine had moved to New York, quickly rising to prominence when he staged, alongside artists such as Claes Oldenburg and Robert Whitman, ‘Happenings’, forerunners of performance art. Paintings had played a part in the New York happenings right from the start. In an early happening at the Judson Memorial Church in New York, Jim Dine (now perhaps best known for his paintings of hearts) performed his preoccupation with paint for his 1960 work The Smiling Workman. Sporting an almost Joker-like makeup of a huge black smile painted on his red face, Dine drank from pots of paint while painting the words ‘I love what I’m…’, on a canvas beside him. Finally, he poured the rest of the paint over his head and jumped through the canvas. Dine states “My most elaborate work, called ‘Car Crash’, was a cacophony of sounds and words spoken by a great white Venus with animal grunts and howls by me.” To date, Dine has written more than twelve books of poetry. 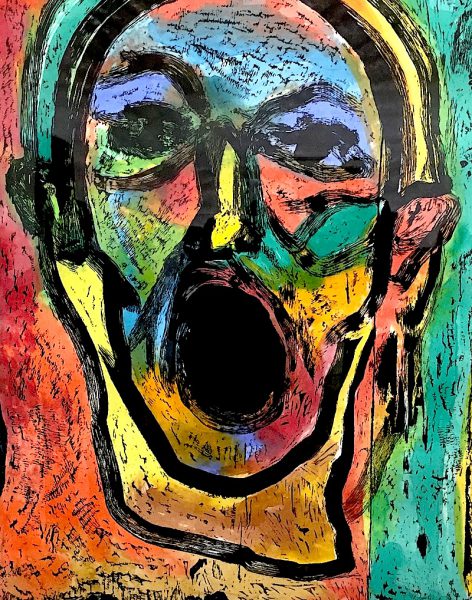 The reflection of the self in his singing poets is also echoed in recent prints depicting Venuses, bathrobes and hearts, some of his most expressive motifs and enduring vehicles for his explorations of line and colour. These themes, particularly the bathrobes, began as stand-ins for the artist, which Dine calls ‘autobiography through objects’. This subject continues with the inclusion of recent, large-scale depictions of Pinocchio, stemming from Dine’s continued interest in Carlo Collodi’s classic morality tale, The Adventures of Pinocchio. The story of Pinocchio, which Dine identified with as young boy, is also very much the story of Geppetto, the old man who brings the puppet to consciousness through his craft. Dine, now older, takes on this role of the maker.

For the past two years, Dine has also been developing a major new body of work that encompasses a more abstract aesthetic. He has made large-scale, extensively hand-painted woodcuts, including A Million Kisses Poem (2015) and Cheval Blanc Poem (2015). These prints defy the traditional notion of what a print should be, with each one created using multiple plates, extensive physical intervention and additional hand work by the artist.

The new works in Poet Singing involve a plethora of techniques. Since the 1960s Dine has gone on to make prints in every conceivable medium, using printmaking with unequaled inventiveness and skill. Poet Singing exemplifies his approach to the medium and the exhibition will be a celebration of Dine’s enduring relationship and fascination with printmaking, which has continued since he made his first print whilst a teenager at school in the late 1940s.