Turner Contemporary is presenting the exhibition ‘JMW Turner: Adventures in Colour’; and in association with the great British painter’s reflections on light, colour, and the sea, contemporary British artist John Akomfrah OBE presents his installation: the video triptych ‘Vertigo Sea’.

The Gallery celebrates its fifth anniversary year with this major new exhibition, comprised of over 100 works by Turner, and includes significant loans from Tate, and many other public and private collections. This particular collection of works is curated to explore the artist’s groundbreaking use of colour and is in fact, the first presentation to take colour as the starting point for examining Turner’s great oeuvre.

When looking at Turner the viewer is very used to the curator recounting tales of the artist’s exploration of light, which would see his later work viewed in part as a ‘kind of’ precursor of Abstract Expressionism, due to what was considered at the time as an ever egregious application of paint, but one rarely hears tales of the artist’s exceptional use of colour. But in fact, Turner’s application of colour was as eccentric to the artist as his brushstroke, and often incredibly vibrant.

The exhibition highlights the Gallery’s intimate relationship with the artist, presenting Turner’s watercolour ‘View of the Beach at Margate’ only recently attributed to Turner, and shown at Turner Contemporary for the first time. As with the other works on display; the painting highlights the artist’s unique relationship with colour through the study of light. We are also met with Turner’s colour wheels referencing the colour theory of the period and the artist’s perpetual desire to experiment and surpass the perceived ‘Old Master’ aesthetic of the day.

This is a well-curated affair: the exhibition journeys toward an ever-greater ‘atmosphere’

This is a well-curated affair: the exhibition journeys toward an ever-greater ‘atmosphere’ as the viewer is met with the final works on show, with the artist’s later oil paintings, which in turn leads us to the sound of the ocean, and the associated video triptych by John Akomfrah: tying the location of Margate, Turner’s relationship to the seascape, and Akomfrah’s contemporary exploration of our complicated relationship with the sea – into a single curatorial package.

In this juxtaposition we are reminded that Turner was a far more controversial artist in his day than we sometimes tend to remember, having become ‘comfortable’ with the artist’s works over time. But Turner was the sublime artist of the sea and drama, and Akomfrah can not fail to be inspired by the theatre of Turne as if he was lashing himself to the mast.

Turner’s elemental watercolours express a desire to capture the ethereal quality of water and light; the elusive meeting of sky and sea – but as with many of Turner’s other works – Akomfrah’s ‘Vertigo Sea’ places human drama at the heart of his own sea study. 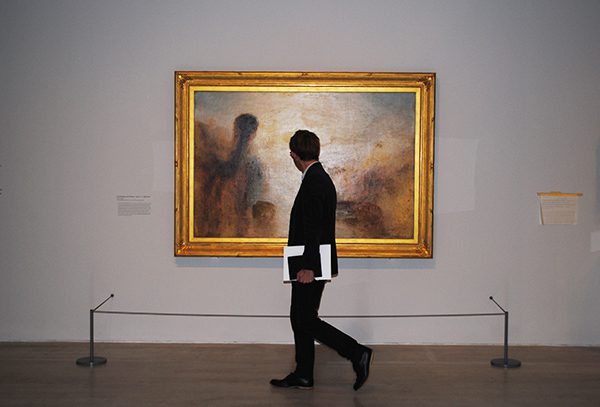 Akomfrah’s triptych of multi-screens premiered at the 2015 Venice Biennale, the work is a meditation on subjects from whaling, to the environment, beauty and danger – the piece is a film essay with the power of a ‘Kubrickian trip’, mesmerising in its sound and images. This journey is a fusion of archive material, original footage from the artist, and readings from classical sources, which continues what has been described as the ‘recycled aesthetic’ of the artist’s recent gallery installations.

The work also references a number of historical sources via motif and signifier, including Herman Melville’s Moby Dick’, 1851, and Heathcote Williams’ ‘Whale Nation’, 1988. Also referenced with a direct relationship to Turner is the incident on board the slave ship Zong, known as the Zong Massacre when the crew threw 133 slaves overboard to drown. An act that led Turner to paint The Slave Ship almost a century later, highlighting the grasping figures being overwhelmed by the great ocean swells, as the Zong disappears into one of Turner’s dramatic ‘atmospheres’ leaving them to their fate.

The great power of the ocean is ever-present in Akomfrah’s piece, a bold meditation, sound swells like the sea itself, images of natural wonder and beauty gives way to archival horror, as whale blood and blubber stains multiple screens, the deep blue waters, and our collective conscience. In turn, these are replaced by the images of watchful figures: the artist’s witnesses to the myriad of unfolding events – perhaps the conscience revived? – amidst the swirling waters of the artist’s moving triptych. This work mesmerises and draws the viewer in, becoming all encompassing as waves roll, and sailors dance – grainy footage juxtaposes with vibrant ocean colours – such colours that can be found as inspiration in the surrounding works of the great JMW Turner, whose influence here is as ever-present and timeless as the oceans themselves.