I was from quite early on a convert to the cult of Joseph Beuys. I actually visited the Kassel Documenta of 1968. The inclusion of Beuys’s Organization for Direct Democracy by Referendum marked his real emergence on to the international contemporary art scene.

There were a lot of still big names in the Kassel exhibition that year: Robert Bechtle, Chuck Close and Richard Estes among the fashionable Photorealists; Sol Lewitt, Richard Serra and Robert Smithson (all of whom had signed a manifesto in opposition to the event, but who were nevertheless included); Georg Baselitz, Hans Haacke and Duane Hanson. Beuys nevertheless stole the show. The other attendees were a throng of bourgeois hippies, carrying their kids on their shoulders, happy to demonstrate how ‘radical’ they were. 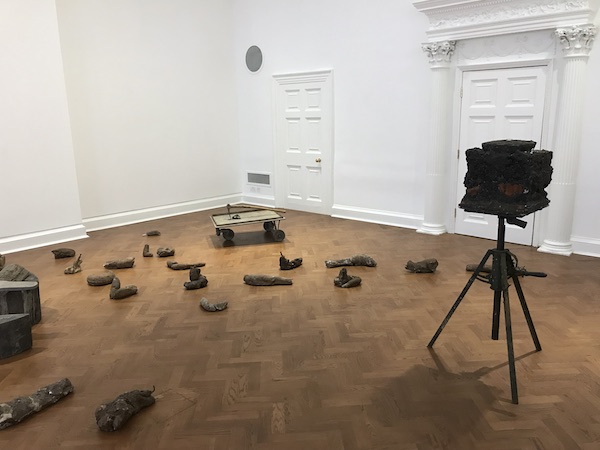 Later I witnessed Beuys performances here in Britain and the artist’s lectures-with-blackboard at the Tate. One of those blackboards, preserved, is on view at Thaddaeus Ropac. Very sad it looks too.

I found the new show at Thaddaeus Ropac in Dover Street, the first in London for eleven years, and thirty-one years after the artist’s death 1986, profoundly dispiriting. Now that Beuys’ charismatic personality has gone, what is there left? The answer seems to be: ‘Not very much.’ What one is offered is a rubble of bits and pieces. Tools, for example, scattered on the floor but wrapped in clay so that the viewer doesn’t recognise them as tools.

There is a metaphor here, but is it one that’s intended?

Beuys is gradually slipping from view. The political situations to which he was relevant no longer exist, and like many political artists, he is posthumously paying the price. Today we have Ai Weiwei who packs a much bigger punch visually, in addition to being more directly relevant to current concerns. When the situation in China changes, as surely it will, I suspect Ai will start to fade away too. Very few directly political artists survive the judgement of posterity. 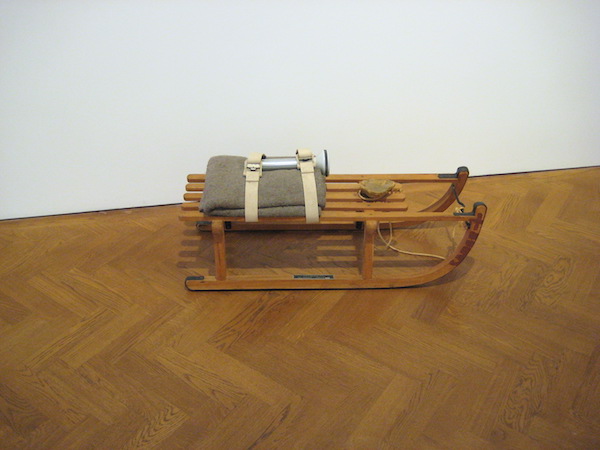 There’s almost nothing there that offers any kind of attraction to the eye. Yes, in addition to the formless objects scattered in the floor, there is indeed a big sepia silk screen of the great man himself, slightly over-life-size, striding confidently forward, signed and inscribed ‘La Revoluzione Siamo Noi’. It dates from 1971, nearly twenty years before the fall of the Berlin Wall, and before the reunification of Germany, which took place after Beuys’ death. Something that Beuys played no part in bringing about. In fact, in his lifetime he was a powerful symbol of the division between the two Germanies. He had a following among the young of the Federal Republic because it was a way of being ‘leftist’ or radical without being identified as a communist. Dear dead days! If a revolution, or anything resembling one, took place in the Federal Republic during that time, then we all missed it.

For me, the best things in the show were one or two tiny drawings of stags. Very fresh, very economical, sharply observed, Beuys drew well when he wanted to. I have on my desk as I write this a little-scratched image on a pebble – you almost need the eye of faith to see it. It shows a horse on the same scale as these drawings by Beuys and dates from the Paleolithic. It is oddly similar in style. I don’t suppose the guy who made it had any political ambitions, but I might, of course, be wrong.