Monumental and breathtaking are the words that first come to my mind when I think of Katharina Grosse’s site-specific installations. Her abstract paintings function in a three-dimensional field. She said: “By making something small really large, you slow the information and time down, like slow motion.”

“There are no boundaries between reality and imagination” K. Grosse

Gagosian Gallery, Britannia Street London this week Launches a major gallery exhibition “Prototypes of Imagination”. Grosse believes that incorporating paintings with the immediate environment forms a unity of lights and colours that paintings in two dimensions neglect. For one of her earlier installations “One Floor Up More Highly “ she transformed a massive interior space into a Martian landscape filled with jagged blocks of white Styrofoam and piles of gravel painted in psychedelic hues.

As she paints, unexpected incidents appear in immersive subjectivity. She opens up the surface to countless perceptual possibilities of the medium. While Grosse is widely known for her spectacular “in situ” paintings, which she made directly onto architecture and interior, her approach begins in the studio. She experiments with technics, forms, material, multiplying this potential with stencils cut out of cardboard and thick foam, which create further cut out forms, layers and depths of perspectives. Her gestures unfold all at the same time, engulfing the viewer in flames of colours. 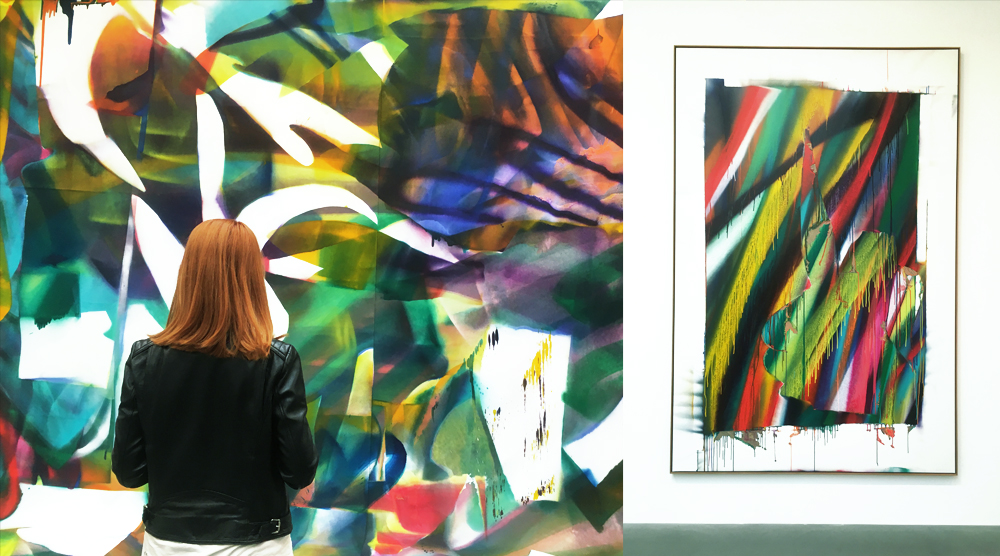 “Prototypes of Imagination”, dominates our first view at the entrance of the gallery, a giant loose cloth painting hangs from the ceiling and slices through the space. Her gestures arise from her use of stencils of biomorphic forms and create entirely new spatial and temporal transformations. Her paintings create multiple dimensions on a single surface.

Throughout the exhibition, her approach continues on stretched canvas in the other rooms, many of which contain rectangular fields with layers of vibrant, pulsating colours that slide and tessellate into each other. By using stencils Grosse blocks out areas of negative space and mixes fields with solid geometries and ambiguous transparencies. The end result is reminiscent of a photogram-like image wherein individual objects are placed on photosensitive paper to produce an image, using light alone. Here, paint replaces the light, as Grosse saturates the fabric with her signature spray-gun technique, burning mist, smudges and accidental drips.

“There are no boundaries between reality and imagination. My pictures are prototypes of this recognition. They try out and dramatically compress the characteristics of reality. I build prototypes of the imagination so that they can be re-enacted and applied to other fields of endeavour.”