The performance artist Leigh Bowery died of AIDS-related illness on New Year’s Eve 1994 at only 33 years old. He didn’t tell anyone he was sick – except his best friend, Sue Tilley. When she asked him what she should tell people when he died, he said: “Tell them I’ve gone to Papua New Guinea”.

He was an entertainer through and through -JP

Bowery left behind an enormous legacy, and his influence is still felt in the world of fashion, music and art. RuPaul, Boy George, Alexander McQueen, Kim Kardashian and Lady Gaga are just a few that have ‘appropriated’ his looks. 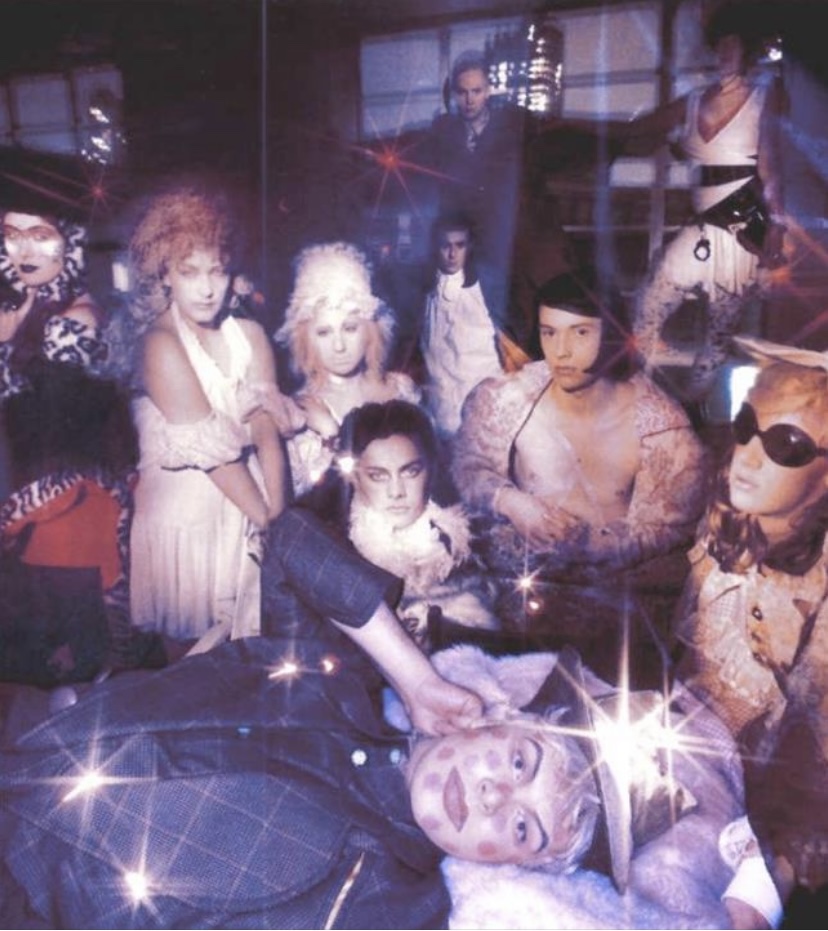 I first met Leigh before he started “dressing up” at Cha-cha nightclub in the early 80s and knew him well enough. Back then, he was a brilliant fashion designer, and I did an ID photo shoot with a group of us wearing his clothes. I even appeared in one of his fashion shows at the ICA, wearing some frilly gingham outfit and sniffing poppers. Later I was a regular at his ground-breaking night club Taboo, in the mid-80s.

“Papua New Guinea” is an exhibition that celebrates the life and career of Leigh Bowery and is on at the Fitzrovia Chapel. The chapel is the only remaining building of the Middlesex Hospital, where Leigh died. In fact, he died about 100 yards from the chapel, which gives it an added poignancy. Whether an atheist like Leigh visited or even knew about the chapel was highly unlikely.

It’s been done up since his day and is a lovingly restored Grade II Gothic Revival style building. Thousands of glittering mosaic tiles sit between some spectacular rib vaulting. It is a fitting (and decadent) place for the work of a man who loved to show off.

His clothes look fantastic in this setting. There are only seven outfits on display, but each one is an iconic look. So it’s not a V&A show (it should be) but a much more intimate affair.

I love how the outfits have been placed and particularly liked the headdress on the altar and the winged blazer flying up in the gallery. They have even managed to put them in dummies which are in “Bowery poses”.

Sue Tilley’s book The Life And Times Of An Icon reminded us just how funny Leigh was, and I had a chuckle here and there looking around the show. His sense of humour was genius, and the overriding feeling I get from his outfits/costumes/drag is that he was an entertainer through and through.

These clothes are totally unique, even “Bowery-Esque” – grotesque at times, other times beautiful, but what is very clear is that they never corresponded to what was fashionable or even what was art either then or now.

What really struck me though was how well made the outfits were. By the time he started transforming his body with costumes like these, with tape, pins, prosthetics and wigs, I only ever saw him in dark and dingy clubs. Not the sort of place you’d examine a hem or a bias cut so that for me was a revelation!

They really are beautifully constructed and painstakingly sequinned and beaded. I’m amazed they survived, as Leigh, a huge man anyway, was a whirling dervish who loved throwing himself on the floor (in homage to Divine at the end of Female Trouble, one of his favourite films). I’m sure a few “disco stains” were removed, and a sequin or three was re-sewn after his death.

My only issue with the show is that we don’t see footage of Leigh in the clothes. These clothes were designed to move, and I only ever remember him running around like a freak, throwing himself on the ground and twirling around on the dance floor to Sister Sledge. There is plenty of footage around, and it would have been good to have a few monitors on display so we can see the clothes live.

Minor quibble for a lovely little jewel of a show that makes you realise what a spectacular beast of a man he was and what an enormous talent we are missing. The world needs more people like Leigh Bowery.