Paul Carey-Kent gives us the latest in his rolling choice of ten, together with previous choices which you can still see… In the ‘too obvious’ category are three rather wonderful painting shows: Auerbach at Tate, Goya at the National Gallery, and Barry Schwabsky’s choices at White Cube, not to mention (oops!) the double at Hauser & Wirth.
Nika Neelova: Faults Folds Faults @ Vigo, 21 Dering St – Bond St
To 23 Jan: www.vigogallery.com 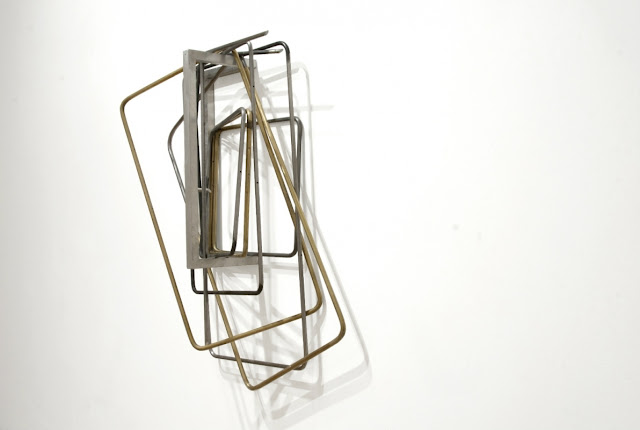 There is no more temporally resonant exploiter of casting then the London-based Russian sculptor Nika Neelova. Here she conjures a geology from the deconstruction and reconfiguration of seemingly casual everyday forms and practices: a foam version of her studio’s gate takes on a lunar surface; the outlines of her studio become re-positionable steel drawings in space; chair frames are re-imagined as wall hangings, in brass which melds its way to aluminium; copper and brass dust are the muted colours of plaster versions of chair legs; and a floor heap which looks like glass but proves to be plastic versions of crowd control barriers which can regulate nothing.  Over time, Neelova suggests, ‘the folds have merged with the object, adopted their forms, discarded their purposes and have become static, hibernating into their future (non)existence’. I think of them as post-modern fossils.
Nika Neelova  see top photo:
untitled (folded studio)   2015 – Steel structure based on the perimeter of the studio, folded (welded steel, hinges)   220 x 390 x 140 cm and untitled (gate)   2015 – street dust cast in foam, steel armature (welded steel, cast foam, dust)   200 x 220 x 2.5 cm
________________________________ 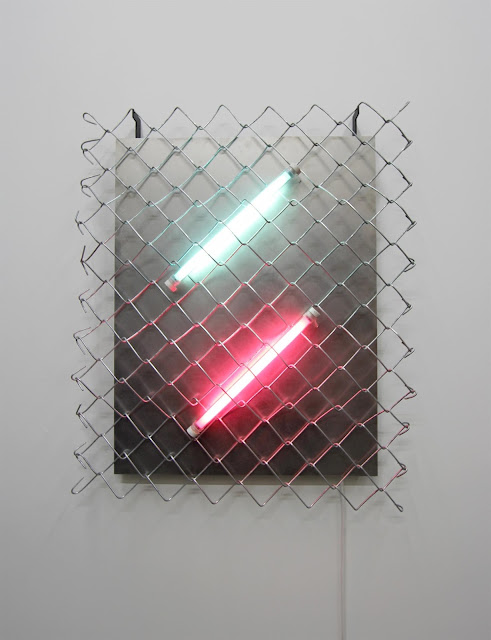 It’s a good time to visit the five galleries on the Herald Street block: several strong shows include such original turns as Kaye Donachie’s face-off of painting and cyanotype  at Maureen Paley and Simon Fujiwara’s shaved fur coats at Laura Bartlett. Nor is the newest of them outclassed: The Ryder’s garage-with-door space proves well suited to Mark Davey’s industrial yet corporeal sculptures, which bring human hesitancy to the mechanical as they trace a neo-romantic path around the walls: from the hypnotic rise and catch of the pair of anthropomorphised neon tunes which constitute Us; to the chain-link and light of Hold (for which, Davey says, he chose two of the 400 available colours of plastic filters) to the poignant dual simplicity of After You Left. 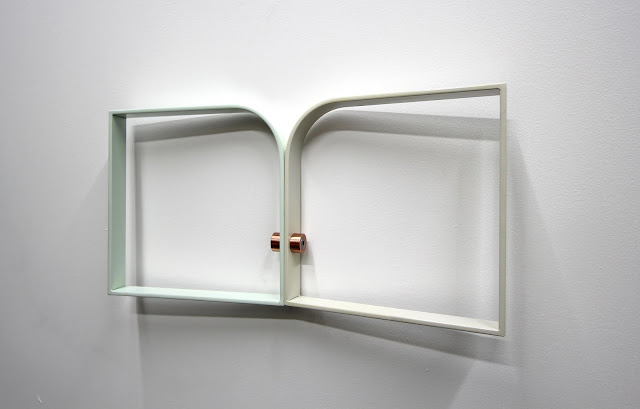 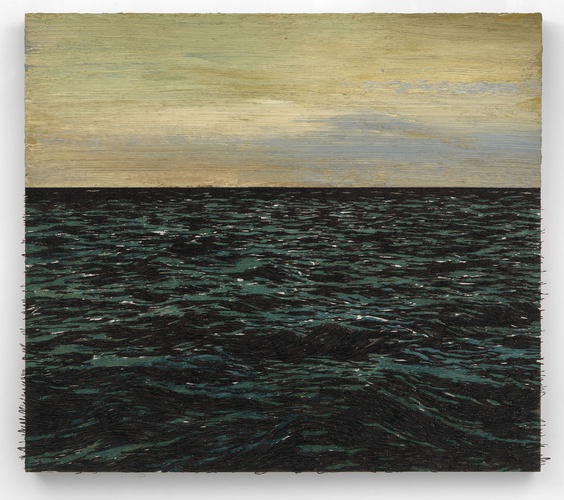 Isla (Ecepticismo), 2015  Oil, nails and fish-hooks on linen panel on plywood, 145 x 168 x 12 cm
What may sound a rather trivial, if impressively obsessive, idea – to attach fishhooks to twelve seascapes – proves visually effective and politically resonant. The aesthetic comes from the variety of light and weathers depicted and how the hooks – 10,000 on a typical picture, fired black to make them pliable – sculpturalise the sea’s seethings and create shadows around and within the image. The resonance comes from how we in the gallery as island look out through the windows of paintings hung to make the sea’s horizon consistent, and are reminded that the Caribbean acted as Cuba’s Iron Curtain during the Cold War – during which Yoan Capote grew up in Havana. 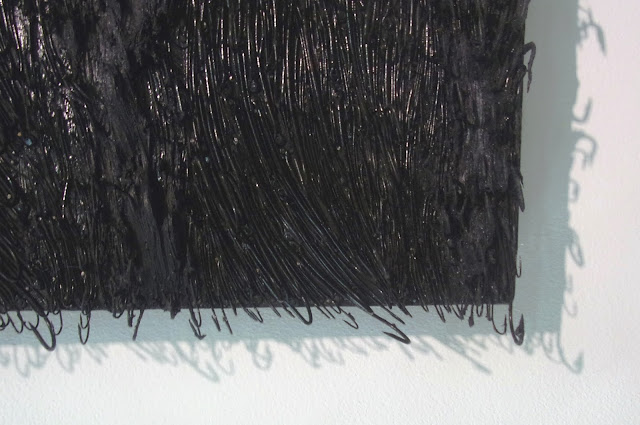 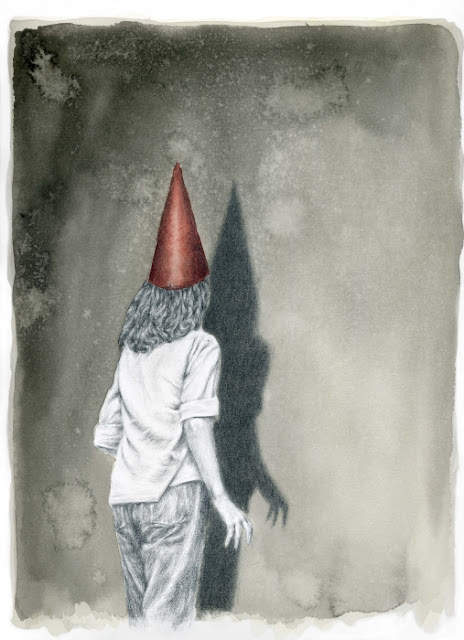 Pippy Houldsworth has three shows by artists I have previously recommended…The single work presentation in ’The Box’ is a classic from 1970: Alina Szapocznikow’s mouth-breast-neck of a lamp merger lit from within to sensually mournful effect.  The Viewing Room shows Rachel Goodyear moving her witty graphic style in a more chance-driven and painterly direction.  And the main space yields 11 new paintings and oilstick works by Clem Crosby, their marks shivering across aluminium, formica and balsa board as he continues his cheerfully nervous exploration of the effects of different grounds. As I suspected, it’s all good. 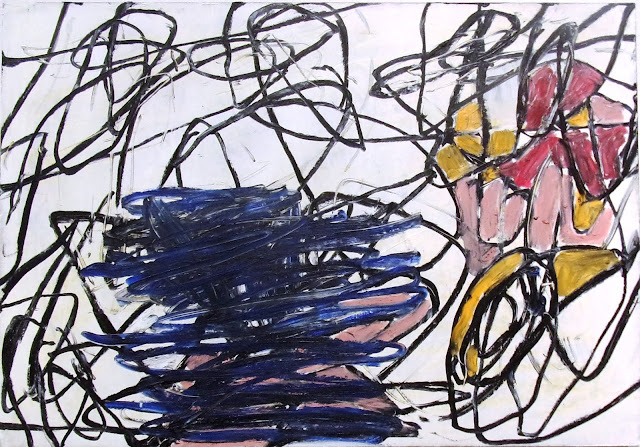 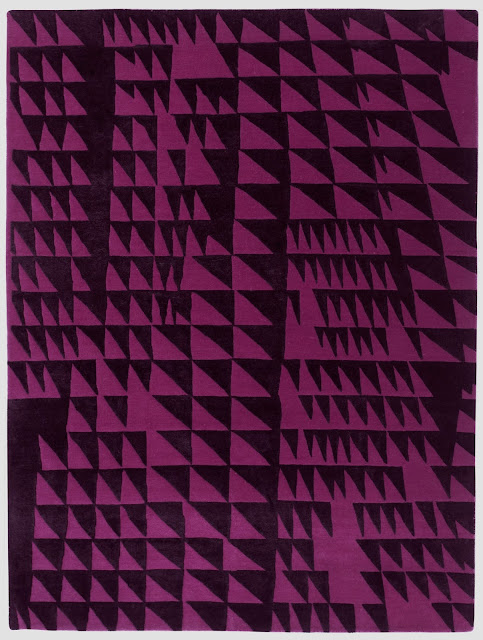 Composition in Black & Magenta
This unusual show focuses on nine large rugs hand woven in India by Christine Van Der Hurd’s team after paintings by the Venezuelan Cipriano Martinez. His work occupies a richly ambiguous space between cityscape and abstraction, architecture and networks, order and its deconstruction. That proves a good basis for handsome silk dhurries in what proves a genuine collaboration: the sizes, proportions and colours of the paintings are changed to suit weaving, and two were made by Martinez knowing they would be woven. Five representative examples of Martinez’s paintings allow comparisons to be made. 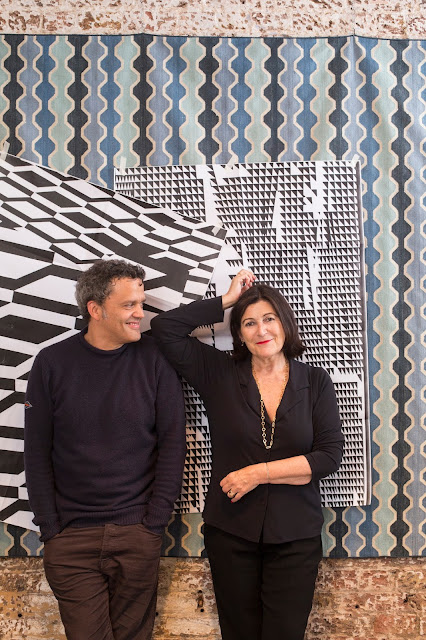 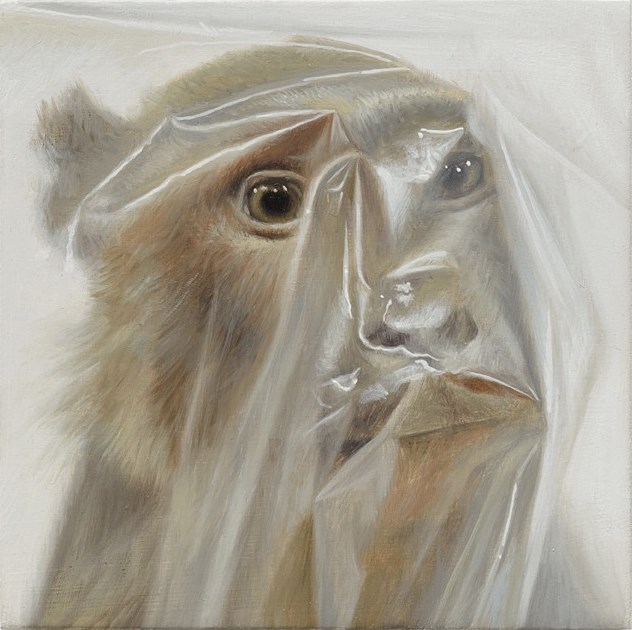 The Horniman Museum, already a fascinating place, is currently enhanced by an extensive retrospective of Mark Fairnington’s photo-realistic yet uncanny paintings inspired by this and other museum collections: they include life sized portraits of bulls, close-up tondos of eyes, panoramic views of specimens in storage, mounted insects trade at human scale and curious heads from the Wellcome collection.  Fairnington has also delved into the Horniman collection to find on exhibited material show alongside his paintings., pointing up the contructed nature of the all that we see here. 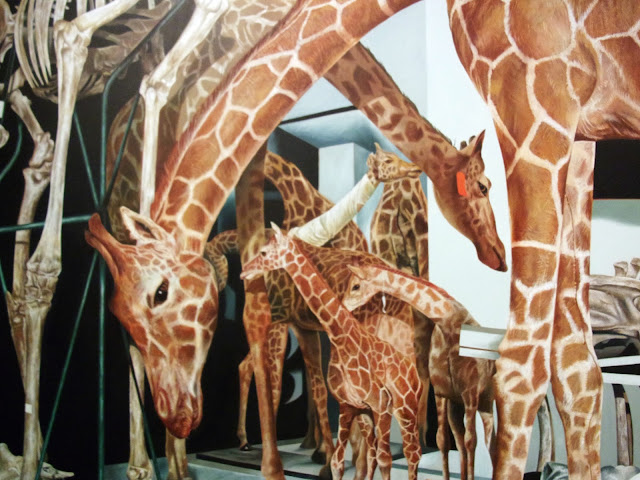 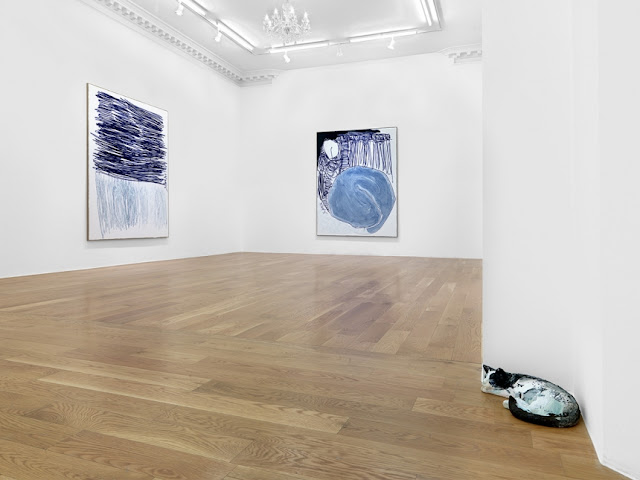 Installation view
Rob Pruitt’s last London show was of ‘suicide paintings’. Things seem seem to be looking up, though, as his latest set finds a generative process in therapy.  Pruitt doodles on a small pad as a way of freeing himself up during each hour-long session. One wall holds 36 of these, some of which Shaw has then blown up by computer to various sizes up to 7 feet high, and overpainted in restrained colours true to the sketches’ medium of super-standard dark blue biro. Surrealist free association meets the magnification of small gestures used by such abstract painters as Kline and Hartung to produce compositions with more life than you might expect.  Sculptures of cats accompany the paintings by way of extra assurance, and it all feels pleasantly odd. 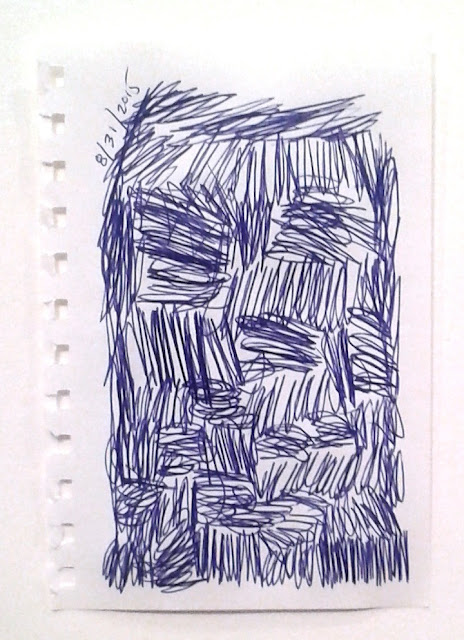 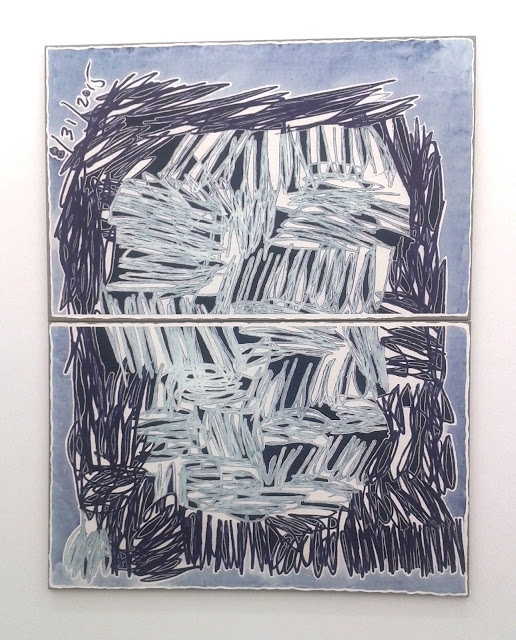 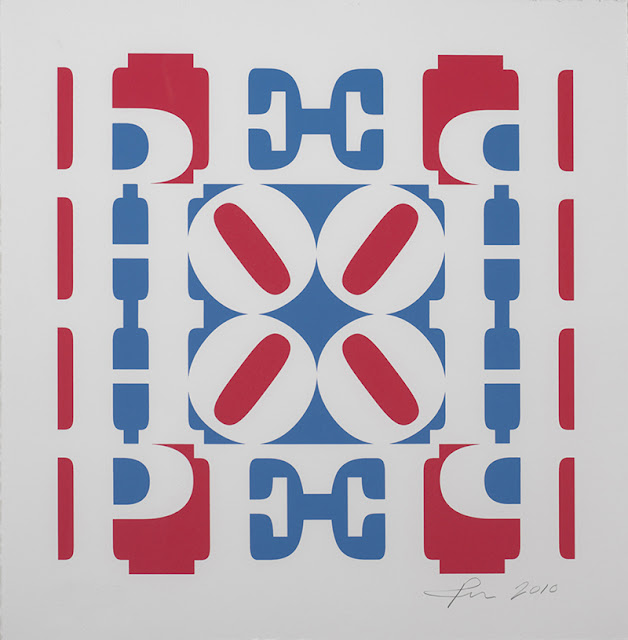 I suspect  neither the Contini Gallery nor Robert Indiana are quite cool in art world terms, but this match-up turns out well as a chance to judge the pop-text pioneer’s significance as a deflator of consumer society staples.  Born Robert Clark in 1928 and rebranding to his home state in xxx, Indiana is best known for his many graphic and sculptural encouragements to ‘LOVE’, in which the ‘O’ in  a pinball-machine-come-advert seems to have been kicked askew by the ‘L’. This substantial retrospective starts with early figurative works from 1946; jumps to 60’s word works with little LOVE but plenty else, including a whole room filled with a rainbow alphabet; then concludes with a series initiated for Obama’s 2008 campaign,  putting HOPE through its paces with some brio. I offer TOIL as the next word, though Indiana says he’s considering PRAY. 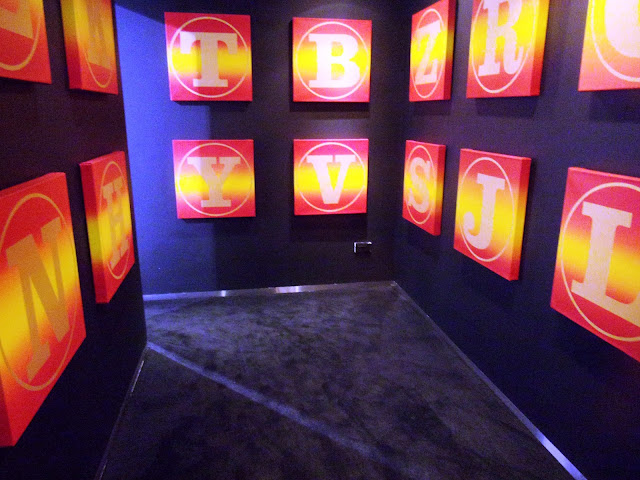