Louise Bourgeois is a mythmaker and a storyteller. A chronicler of the self who has used her life to create narratives that speak of female desire and the body, memory and repressed trauma.

The child of weavers, her parents ran a tapestry restoration atelier in Paris, overseen by her mother. Yet, despite appearances, the household of this prosperous, middle-class family was wrought with domestic tension, for Louise Bourgeois’s governess was also her father’s mistress. This trauma would become pivotal in her autobiographical oeuvre with its explorations of motherhood, female infidelity, abandonment and trust. That first home would become her whole universe, with worlds spun within worlds to create a prism through which all future worlds would have an enhanced significance. 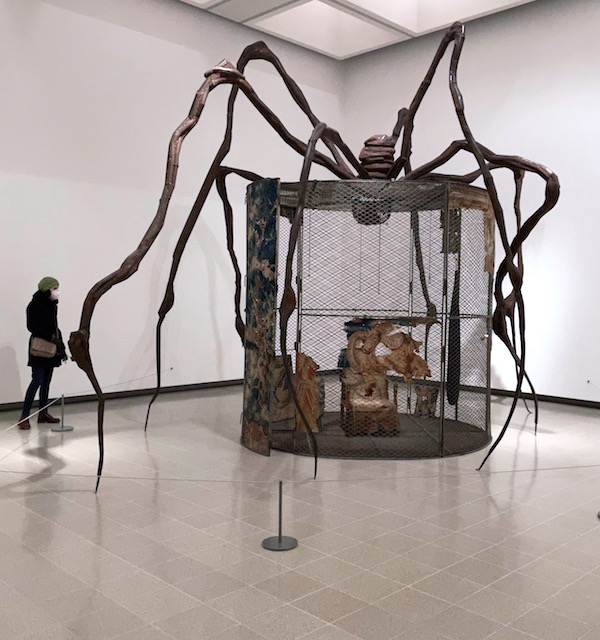 This new exhibition at the Hayward establishes the female body within her work as both subject and object. A site of fear, derision and longing, of pleasure and pain. On entering the first gallery, the visitor comes across a rack of vintage undergarments. Their silky texture and fleshy colours suggest the ultra-feminine, yet also the transgressive. The chemises and knickers have a Proustian ability to conjure the half-forgotten smell of perspiration mingled with cheap talcum powder and bodily fluids. Other garments hang like the husks of discarded insects in cages and enclosed rooms made of mesh wire or battered vintage doors. Entitled Cells, there’s a sense, here, of claustrophobia, of hidden spaces, of what is secret and forbidden. What are the people doing who have abandoned these clothes?

In Couple III and Couple IV, two stuffed lumpen figures copulate. They are featureless. One couple is wrapped in some sort of truss, while the lower figure of the second couple (the female?) has a prosthetic leg buckled to her thigh with a lattice of leather straps. These stuffed black figures, faceless and dark like the shadows glimpsed against a nursery wall, suggest the trauma of a child witnessing what should not be seen. Women are constantly seen as damaged, they walk on crutches, have prosthetic limbs, are patched and mended. Elsewhere the bulbous shape of a female lies face down, her stuffed buttocks raised in abject invitation, the stiletto heels of her shoes protruding like protective spurs. While a pink doll, patched and sewn together with coarse stitching, lies prone, giving birth to a similar puppet attached by a rope of umbilical cord. Its title, Do Not Abandon Me, emphasises Bourgeois’ prelapsarian vision of the safe womb. The world post-birth, it seems to imply, offers nothing but anxiety, fear and pain.

In her psychoanalytic theory of object relations, Melanie Klein places emphasis on biological drives. Objects are seen as standing in for or being a symbol of a person or a part of a person (such as the mother’s breast), the mother being the primary object of childhood attachment. According to Klein, the child’s relationship with the ‘good or bad breast,’ i.e. with that which is present and available or that which is absent and rejecting, sets the ground for all future interpersonal relationships. This conceptualisation of internal objects is linked to Klein’s theory of unconscious phantasy and the development from the paranoid-schizoid position to the depressive position. The many breasted wall relief in lead, steel and fabric entitled Trauma Colours is an acknowledgement of this theory, as is the figure with spools of white thread attached to her breasts like some stuffed pink Venus of Willendorf. 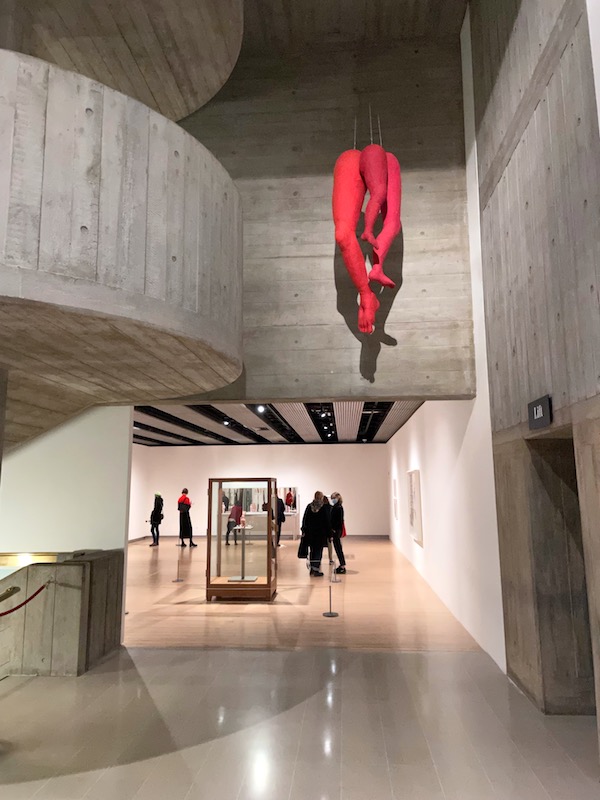 Sewing and stitching are themes that run through Bourgeois’s work and function as acts of transformation, renewal and reparation. Her gargantuan (maternal) spider weaves webs that repair and mend yet also entrap and suffocate. A needle can wound and stab as well as patch what is torn. In Needle (Fuseau) 1992, it becomes a dangerous phallic object. Whilst, in the series Eugène Grandet – made up of buttons, hooks and stitching – we’re reminded how sewing was considered to be primarily women’s work, passive, docile and compliant. A way, as suggested
by the title of the fabric and lithograph book, Ode à L’oubli, to forget.

There is a great deal of implicit violence in this powerful exhibition, in the headless torso that hangs over the stairwell like a Soutine carcass of meat or in the small stuffed figure with an amputated leg, entitled Knife Figure, where a rusty blade attached to the headless neck threatens the vulnerable pink body with sexual savagery. The series of heads, some seemingly flayed and fleshy, others beaded in patterns reminiscent of the tattooed faces of the Māori people, look as though they’ve been collected from the basket below Madame la guillotine during the French Revolution.

Louise Bourgeois’s work maps her way through this complex female terrain in order to regain her selfhood. Her influence on younger artists such as Tracey Emin and Sarah Lucas is palpable. Still, in Bourgois, there is never any trace of sentimentality or self-pity as there is in Tracy Emin’s work. Victimhood is avoided by Bourgeois’s muscularity. As an artist, she was the author of her fears, reframing internal anxiety as a series of external art objects. Her narrative, woven from personal trauma, takes on the world, transforming and reconfiguring the broken and the wounded into something whole.

Sue Hubbard is a freelance critic, award-winning poet and novelist. Her novel Rainsongs is published by Duckworth and Mercure de France: Purchase Here
Her fourth poetry collection, Swimming to Albania, is available Here   She also has two forthcoming novels from Pushkin Press.

Louise Bourgeois: The Woven Child Hayward Gallery Until 15 May