She’s the oldest artist to have won the Turner Prize (she is now 67). Born in Zanzibar, Lubaina Himid returned with her Lancastrian, textile-designer mother to Maida Vale when little, after her African father died from malaria. They moved in with her aunt, a music teacher, who made sure that her niece could read by the time she was four, while her mother took her on trips to the V&A. Fast forward to Wimbledon School of Art, where she studied theatre design, only to realise that, in those days, ballet and opera were largely dominated by white men.

The exhibition as whole is rather baggy and lacks focus – SH

By the age of 36, she’d moved to Preston to what is now the University of Central Lancashire and eventually became a professor of contemporary art. Part of a generation of emigres who, for a variety of reasons, came to this country and wove their differently lived experiences into the warp and weft of post-war Britain, enlivening it with new music, food and ways of seeing, it was a shock to discover that the streets and institutions were blighted with racism. Art, for Himid, became political. Along with other young black British artists in the 80s, she used her platform to highlight these concerns. Unlike her contemporaries – the YBAs, primed by the 80s zeitgeist of Goldsmiths to learn how to appeal to the uber-collector of the day, Saatchi – these young black artists – many from the provinces – tackled subjects such as institutional racism and the lack of opportunities offered to talented black youth. 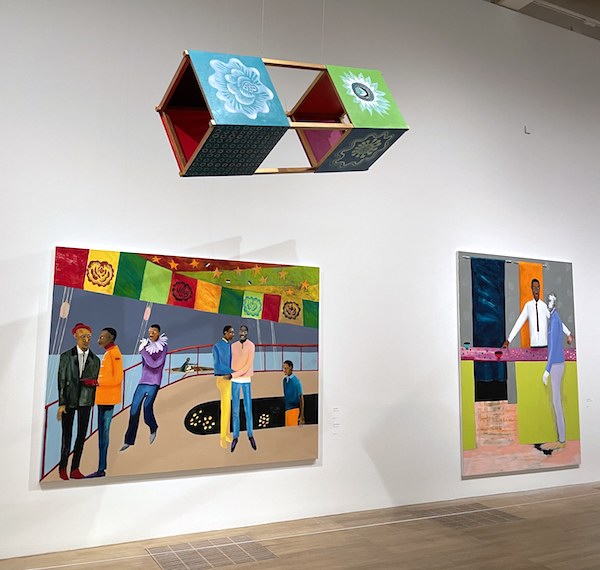 Now Tate Modern is presenting her largest solo show to date, giving her the chance to demonstrate that all the world’s a stage and meld her interests in theatre, opera, architecture and painting in the bunker-like spaces of the Blavatnik building. At the gallery, entrance are a series of banners designed to look like East African Kanga fabric, inscribed with phrases and homilies. Overall, they are entitled How Do You Spell Change? Painted in a frieze around the top of the wall in sugary pink are the words Our Kisses are Petals, Our Tongues Caress the Bloom. This, presumably, is to set the tone for the exhibition within. Credited with being one of the most powerful political voices in British contemporary art, my hopes were set high. Himid has woven a series of questions throughout the exhibition in which she asks us to consider how history and the built environment shape our lives. A form of visual Socratic questioning, the aim is to encourage viewers to engage with alternative discourses and challenge long-held prejudices and mindsets. It’s an interesting idea, but let down by the blunt lack of subtlety of the questions – as if there’s an easy, black and white answer to these complex issues.

As we enter the first space, we encounter Metal Handkerchiefs, a series of nine vibrantly painted metal sheets which appropriate the ubiquitous language of health and safety that so often dictates how we use architectural spaces.

Moving further into the exhibition, Jelly Mould Pavilions for Liverpool is an imagined competition to design public monuments for the city in order to celebrate the contribution of its African diaspora to the city’s history and wealth. Using Victorian jelly moulds as architectural models, she wittily reflects in her imagined cityscape the entangled web between the consumption of sugar, the slave trade and Liverpool’s prosperity. It’s a clever, engaging piece but not shown to its best advantage in the vast gallery. It demands a more intimate space. 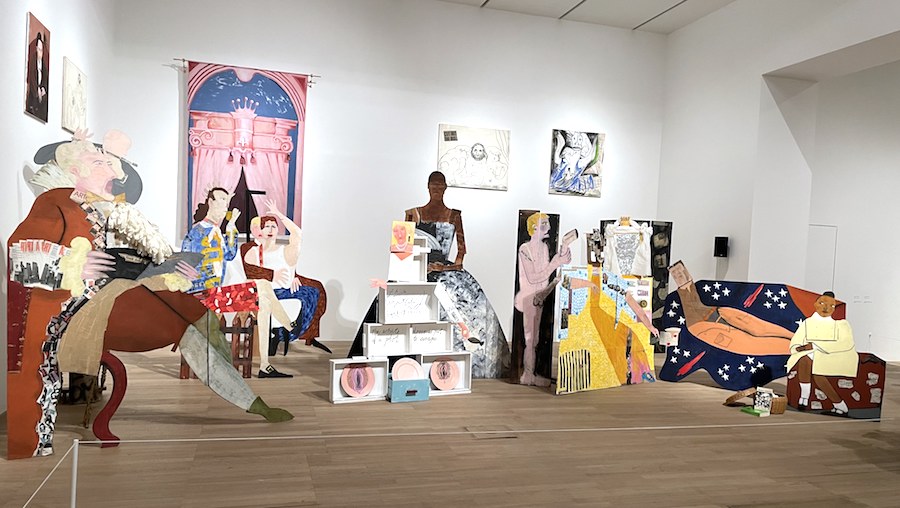 And that’s much of the problem. The exhibition is simply too large and overblown -with paintings, installations and sound pieces – and, as a result, feels unfocused. In her sound pieces, Reduce the Time Spent Holding, Himid recites from health and safety manuals to the rhythm of tools and machines, while in Blue Grid Test, patterns from around the world are woven with memories of the colour blue, spoken in three languages. Then there’s the sound of the sea and creaking wood – presumably to remind us of slave ships – juxtaposed with a wave-like sculpture. But so many competing ideas simply dilute the whole. One wonders whether this is a bad curatorial decision or Himid’s choice. Many of the individual works are powerful, but less would have amounted to more.

Among her most striking works is A Fashionable Marriage, first shown in 1986, a cardboard-cut-out installation that revisits Hogarth’s Marriage A-la-Mode: The Toilette – a biting satire on the moral corruption of the elite and wealthy in the 1700s. In her witty reconstruction, one half focuses on the art world – the castrato becomes critic, the flautist, the dealer, while random other figures are artists, including the de rigueur feminist. The other half of the work includes political figures of the day: Thatcher and Regan, along with the National Front. On the floor is a little girl – who, like the boy in the story of the Emperor with no clothes, blurts out the truth that he’s naked. The little girl is saying to the artist: ‘Stop negotiating and being polite. We have to fight. We are part of a big political battle’. This is one of the works where Himid’s political message and the artwork potently meld to significant effect.

I wanted to love this exhibition. After all, who could possibly fault an artist of colour for wanting to point out what she and her generation have been up against it and that they had to battle to have any degree of visibility or a voice? But ethical sympathy isn’t enough. Yes, there are some potent works here, but the exhibition as whole is rather baggy and lacks focus. Everything has been thrown in, including the kitchen sink. Whether this is the Tate’s fault or Himid’s, I’ve no idea. It’s a pity because a tightly focused exhibition of her best work would have been a very potent thing, indeed.

Sue Hubbard is an award-winning poet, novelist and art critic. Her fourth poetry collection, Swimming to Albania, has just been published by www.salmonpoetry.com and her latest novel Rainsongs is published by Duckworth. 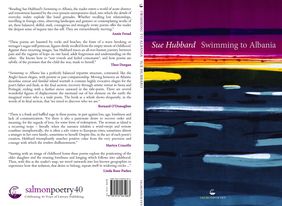