In Bruce Bernard: Portraits of Friends and in a noted John Deakin photograph of Michael Andrews, Frank Auerbach, Francis Bacon and Lucian Freud in Soho in 1963, we see the group conviviality which underpinned the angst typically depicted in the work of these foundational School of London painters. While often discussed in terms of figuration versus abstraction, their work is also resolutely existential, with the mood engendered by much of Bacon’s work, in particular, being, in the words of the writer Sue Hubbard, “one of bleak isolation and violent angst … a paean to existential despair.”

Figuration, existentialism, and portraiture remain significant strands within their work

While the Deakin photograph was posed and was rejected for publication at the time, it does, nevertheless, capture something of the depth of friendship enjoyed initially by these four, when, for example, Auerbach would see Bacon twice a week, and Bacon and Freud would be together all day when they weren’t working. Auerbach has described their conversations about painting, literature, gossip, and all things under the sun. Bernard’s images of Freud, Bella Freud, and Celia Paul show them playing the fool together in the studio in refreshing contrast to the intensity found in paintings such as ‘Painter and Model’, 1986-7, and ‘Naked Portrait on a Red Sofa’, 1989 – 1991. It’s worth noting that, in recent years, Paul has emerged as a Gwen John to Freud’s Augustus and that there’s a lightness in the photographs which is rarely seen in the artist’s work, perhaps appearing most fully in some works by Andrews. ‘The Colony Room I’, 1962, and ‘The Colony Room II’, 1962, however, while showing members of the group relaxing through their intense colours, distortions and expressive brushstrokes, inhabit the existential in ways not shared by the photographs. 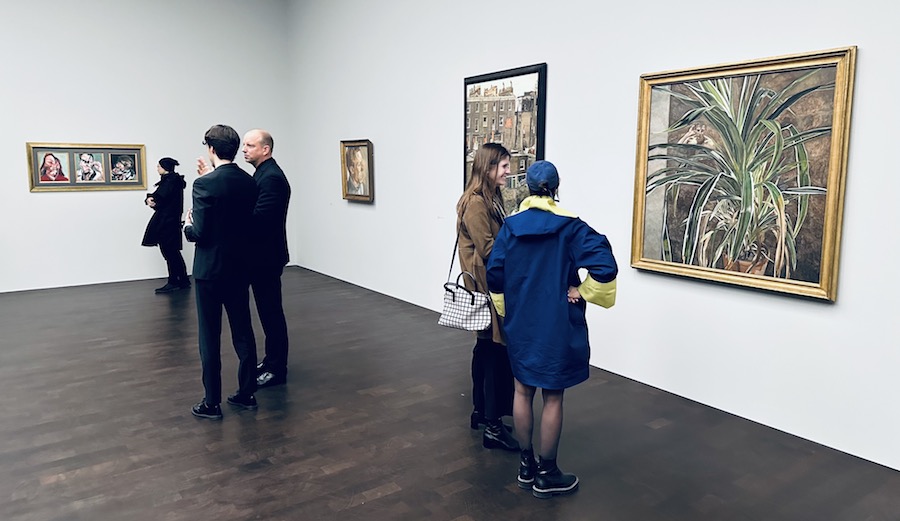 The group also painted one another, while Freud, in particular, collected the work of each of his friends. At various times throughout his life, he owned paintings by Bacon. At his death, he owned sixteen by Auerbach and one small oil by Andrews. Portraiture sat at the heart of all their practices with images of each other and self-portraits found in Friends and Relations: Lucian Freud, Francis Bacon, Frank Auerbach, Michael Andrews and Lucian Freud: New Perspectives. The National Gallery exhibition, for example, has ‘Michael Andrews and June 1965–6 and ‘Frank Auerbach, 1975-6, while the Gagosian show has two studies of Freud by Bacon. The exhibitions explore aspects of the camaraderie and interrelationships of these four painters whilst also highlighting the intimate relationships between artist and sitter, including artist and lover, partner, and offspring.

While figuration, existentialism, and portraiture remain significant strands within their work, the critical debate between them, within their works, seems to have been about distortion versus clarity and fine versus broad brushstrokes. Freud moves from his crisp, clear early style, which shows a debt to Neo-Romanticism, to a much more expressive use of broad brushstrokes, presumably somewhat influenced by Bacon’s distortions, Auerbach’s layers and Andrews’ mix of loose and tight passages of paint.

Bacon distorts his portraits to reveal the underlying existential angst found within, while Auerbach’s layers serve to suggest the subject’s presence more than their features. Both operate primarily in the liminal hinterland between figuration and abstraction. Andrews and Freud, while using abstract passages, remain more fundamentally figurative artists. Andrews’ use of looser and more tightly painted passages within the same painting is a way of indicating focus and creating atmosphere. Freud, who spoke of “wanting the paint to work as flesh does,” increasingly comes to paint flesh and how flesh forms and fails us as human beings.

The National Gallery’s exhibition is structured in five chronological sections, which are also thematic. In ‘Becoming Freud’ we see a move from an initially naïve expressionism to the crisp objective acuity, which led Herbert Read to describe Freud as the “Ingres of Existentialism.” The Gagosian exhibition ‘Girl in a Dark Jacket’, 1947, exemplifies this early style depicting Kitty Garman, Freud’s first wife and the daughter of sculptor Jacob Epstein and Kathleen Garman.

‘Portraying Intimacy’ frames his artistic development within the context of relationships with family and friends, covering similar ground to that explored in Friends and Relations. ‘Power and Death’ contrast Freud’s portraits of powerful individuals with his delicate and poignant chronicling of frailty in his own mother’s death, such as ‘The Painter’s Mother Dead’, 1989. Again, the two exhibitions overlap as, in the Gagosian show, we find ‘The Painter’s Mother Resting III’, 1977, an early entry in the series of portraits of Lucian Freud, which he began after the death of his father, Ernst Freud, in 1970. ‘Art and the Studio’ then focuses on Freud’s keen awareness of artistic predecessors and the role of the studio in his practice, with it presented both as stage and subject matter. His awareness of his predecessors enables his paintings to reflect aspects of the history of art astutely; couples hold hands in ways that remind of Renaissance friendship portraits; sitters clutch flowers in the manner of Hans Holbein, and interiors are informed by Surrealism. 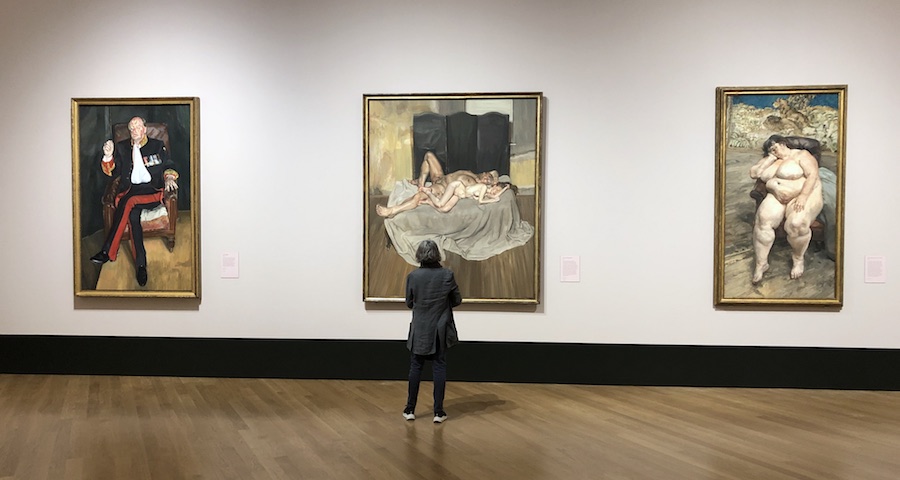 His interest in the representation and materiality of paint also comes to the fore in this section. It is carried over into the final section, ‘The Flesh’, which brings some of Freud’s most famous large-scale naked portraits into this retrospective, among them ‘Painter Working, Reflection, 1993. Tessa Lord has explained that it was, in part, under Francis Bacon’s influence that “Freud adopted a more painterly approach, producing bigger and bolder brushstrokes as a result.” This change in style leads Freud to focus on flesh more than likeness and fuels his continuous examination of the surface of the human body, including his own, in old age. The Gagosian show, ‘Sleeping Head’, 1962, gives us a portrait that is more a depiction of the individual’s skin than of their likeness. Interestingly, this returns us to the ripples or waves of paint that non-realistically cross his face in an early ‘Self-portrait’, 1940.

Freud—in the centenary year of his birth—emerges as the group’s central figure in terms of maintaining relationships, painting group members, and collecting their works. Each painter was aware of the others’ practices to the extent of occasionally competing with one another. In his interview with Richard Calvocoressi for Gagosian, Auerbach said, “the basis of the association was a feeling that the others were worth contending with”, and yet he also “found Lucian quite exceptionally nice, an exceptionally sweet man, and a good friend, and very frank and honest and everything one could wish for in a friend.” Influence, he suggests, was more in terms of lifestyle and behaviour than painting. Yet, affect one another they did, whether reacting against aspects of each other’s styles as Auerbach says he initially did with Freud’s fine sable brush style or more positively as Freud when influenced by Bacon towards the use of more extensive and bolder brushstrokes. While their talk was about all things under the sun, their primary effect, one on the other, was on the marks that their brushes made on canvas.