Fly In League With The Night, at Tate Britain, covers Lynette Yiadom-Boakye’s work from her graduation in 2003 to the present day, with some paintings made during lockdown.

I hadn’t seen much of Yiadom-Boakye’s work before and went into the show with no expectations. At first glance, it looks like just another series of portraits. But slowly the paintings emerge, the characters come to life, and her work seeps into your soul. Her characters often stare back at us, quietly from the shadows, their poses are indistinct, and their story vague, but the paintwork is lush and full of energy. I loved this show; it stayed with me for days after.

She is first and foremost a storyteller

Lynette Yiadom-Boakye paints pictures that look like portraits, but are not.

None of these pictures are of real people; they are her creations, using found imagery and her imagination. The paintings have poetic titles like “Accompanied to the Kindness” and “To Improvise a Mountain”. So it is no surprise to find out that she describes herself as a writer as well as a painter and her short stories and poems frequently appear in her catalogues. She explains: ‘I write about the things I can’t paint and paint the things I can’t write about.’

She is first and foremost a storyteller. I kept thinking of Raymond Carver’s minimalist and sparse stories. Her people are the ordinary people that Carver wrote about. Like Carver, she encourages us to fill in the gaps, to let our imagination complete the picture. I found myself thinking about characters in these paintings long after I’d left the show. What happens to them?

There are plenty of references to art history; Velázquez, Manet, Degas and a few others come up, but mostly indirect. This too, is left deliberately vague. Sometimes it is a colour and sometimes a pose, but we are left in the dark as to what inspired her.

It is obvious she loves painting in oil, her brushwork is fluid, and she works quickly. She doesn’t make preliminary sketches but improvises on the canvas, usually producing a painting in a day (throwing out several she is unhappy with), and the spontaneity is fantastic. The brush strokes are bold and full of energy, with minimal blending. The works feel fresh and vibrant as if she is in a hurry to fill up our spaces. 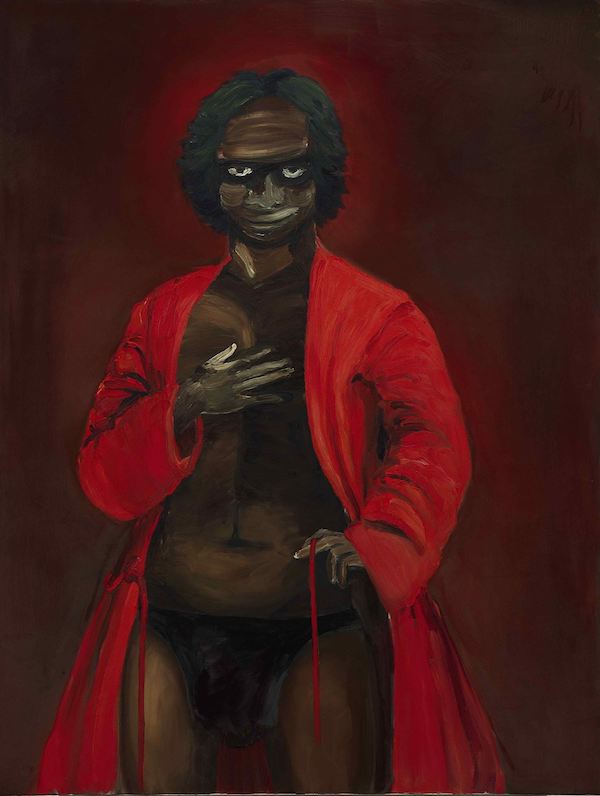 The colour is handled like an old master, mostly monochromatic and muted. Like the Impressionists, Yiadom-Boakye never paints with pure black pigment. She mixes blues and browns to create rich deep hues. The darkness is broken up by unnaturally white highlights: white teeth, eyes and cigarettes. Red in the first room (the show is not chronological but rather instinctual) is used to startling effect with her 2003 painting, ‘First’ being an unusually direct reference to John Singer Sargent’s ‘Dr. Pozzi at Home’.

These paintings are impossible to place either in time or a location. They could have been painted a century ago, in France, Italy or elsewhere. The clothes and hair are era-less, and her characters are shoeless because shoes would place them at a particular time. She has said: “People ask me, ‘who are they, where are they?’ What they should be asking is ‘what’ are they?”

Her paintings occupy a world that remains under-represented in art history, and it is a fact that Yiadom-Boakye is the first black British woman to have a retrospective at Tate Britain. Her work isn’t directly political, but just by having a show containing black subjects who are not what we usually see in major art galleries collections, that gives the show a political edge.  They are not servants, or exotic, but rather just ‘there’, just ‘being’. Just having visibility makes them radical. As she herself has said”…It isn’t so much about placing black people in the canon as it is about saying that we’ve always been here, we’ve always existed, self-sufficient… and in no way defined or limited by who sees us.”

These paintings do raise questions of representation and identity, but they also spark off our imaginations like the best short stories. What is clear is Yiadom-Boakye’s love of painting. These wonderful pared back paintings play with historical portraiture conventions, while at the same time defy easy categorization. They demand of us a suspension of disbelief that allows our imagination to run riot. This a brilliant show, and I just hope lockdown allows as many people to see it as possible.

It is apt for a painter who is also a writer, that the Tate has included a display of some of the artist’s favourite books, including works by James Baldwin, Shakespeare, Zora Neale Hurston and Ted Hughes. Perhaps it is appropriate to end on a quote by Neale Hurston?

Lynette Yiadom-Boakye: Fly In League With The Night, Returns to Tate Britain after having been sadly cut short by the COVID-19 lockdown. 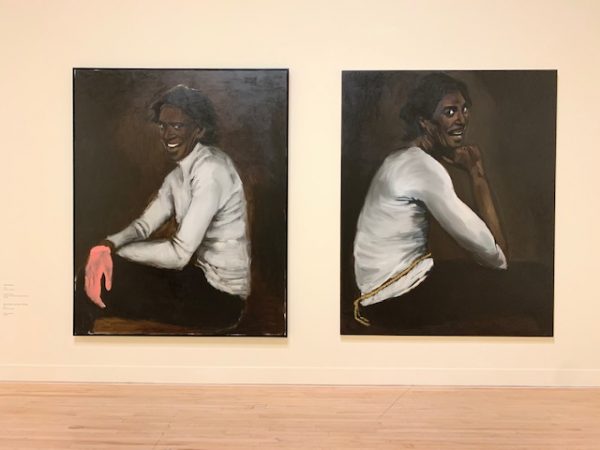 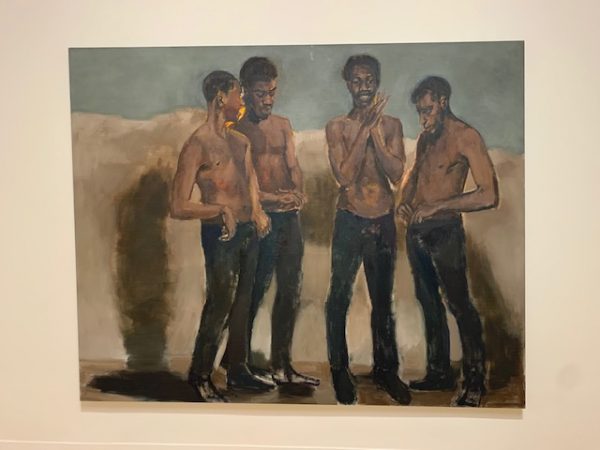 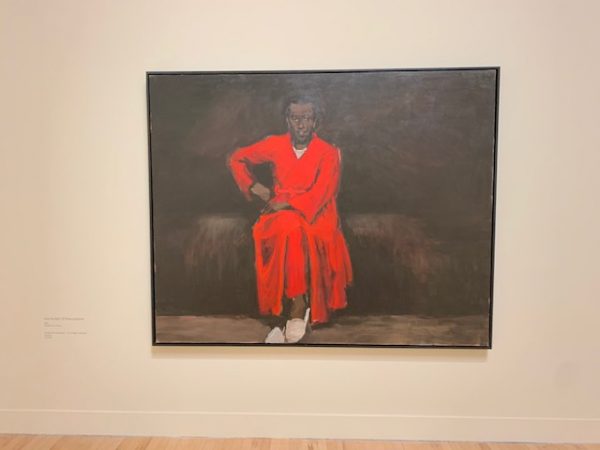 Any Number of Preoccupations 2010 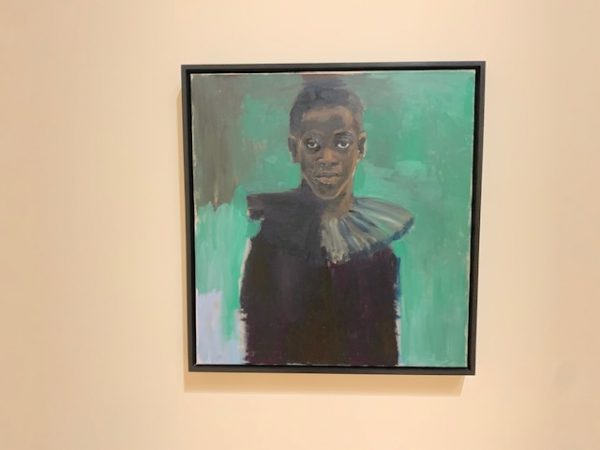 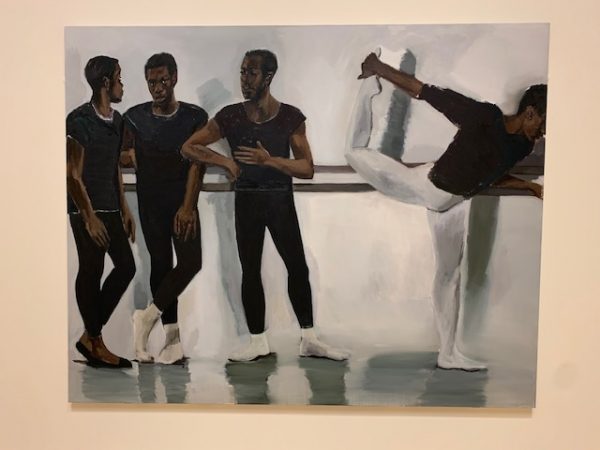 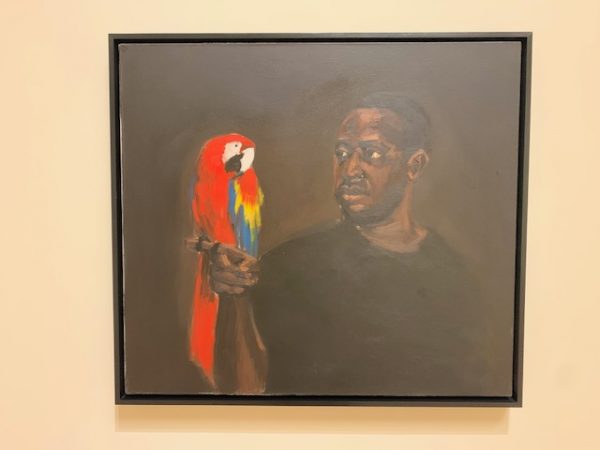 Accompanied To The Kindness 2012