A couple of years after Lynette Yiadom Boakye dazzled New York with her solo show at the New Museum, she returns to the city with 35 new paintings. Both Jack Shainman galleries are showing the oil on linen paintings. Her invented tribe of young, black, mostly male subjects are united by both steadfast gaze and a loose, confident brushstroke. With an almost AbEx freedom, the English born, Ghanian artist creates work with appealing emotional expressionism.

“In Lieu of a Louder Love” could be the title of a sixties jazz album, but instead it is from a poem written by the artist, who also writes stories and chooses lyrically enigmatic titles for her work. 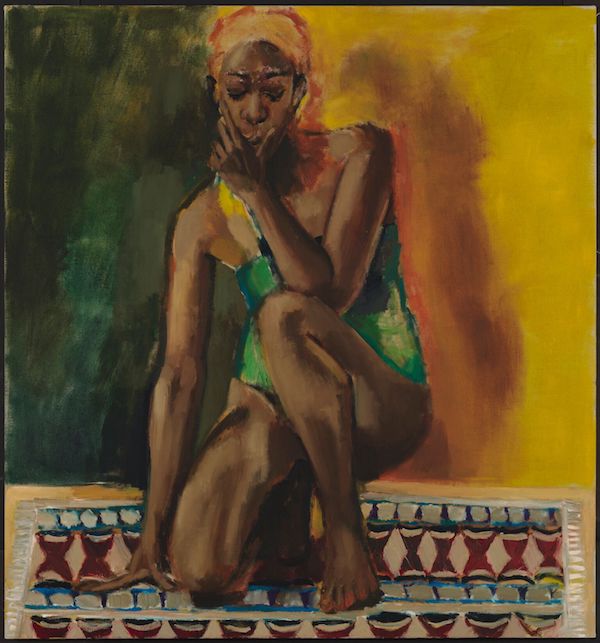 The Turner Prize nominated artist is famous for the speed in which she creates her imaginary subjects, generally finished in one day. Gestation must involve bouts of imagination, fantasy and research. She paints people of her generation; Tube riders, readers, creators, cigarette smokers and those who live with animals, and each other. Of her characters, she has said, “They don’t share our concerns or anxieties. They are somewhere else altogether.” And that “somewhere else,” be it an outdoor scene, a green-walled space, or white tablecloth scenario, appears like a mysterious and dreamy environment. Through light and shadow, Yiadom Boakye mingles her subjects and background. The figure emerges from the atmosphere, or the atmosphere emerges from the figures. Thus, the sheer crimson drama of the outstretched arms of “The Ventricular” matches the brushy background. In her double portraits, the personal connection can be vague or engaged, but the colour and form are always mesmerising.

The artist has said she “conceives of her work as a group”, and the slim, often barefooted characters are “also all black … because I’m not white.” Working from scrapbooks, drawings and photographs, the narrative is left up to the viewer. The people she portrays share a subtle beauty, assured and nonchalant.

Although all the portraits are of ebony and chocolate-hued subjects, Yiadom Boakye paints a green splash in the white of an eye, and verdant shadows on a dark complexioned face.

The insouciant female subject of “God of All Reason” flashes her charming smile, as open as the book at her feet, her hand raised in a graceful curve. Another reader is portrayed in “Rue The Day”, both relaxed and engrossed in the text.

Other props include spirit animals like the a white owl perched on an outstretched arm in “Ever Exacting” the white feathers counterpointed by white socked feet. The companionable dog laying on a checkerboard floor portrayed in “Black Allegiance to the Cunning” is as much pet as spirit animal companion.

Dancers abound, one especially captivating mirrored image of a seated dancer, or the group of dancers at the barre, “A Concentration.” Actually, her characters all possess a lithe poise, as seen in the handsomely bearded subject of “Prior Acts” who is cocooned in a scarf of pink cashmere. The sinuous and gorgeously muscled outstretched arm of one of the three women in “Sister to a Solstice” becomes a visual lynchpin in the image of women gathered around a tablecloth, toasting.

“4 PM Hampstead” moves out of interior spaces, to nature, where a standing man is juxtaposed by the seated woman propped against a tree trunk. The troika of her splayed hand on the ground, next to orderly tree roots is balanced by the man’s bare brown feet.

The artist cites influences of Manet, Degas, and Walter Sickert, a British painter who also favoured ordinary people as subjects. Her images are intimately timeless, the striped shirts of a young man could be on a 1950’s Greenwich Village bohemian or a 2019 fashionista. A confident sophistication unites her fictional subjects.

In 2018, Lynette Yiadom Boakye won the 2018 Carnegie International prize, and she has had recent record-breaking auction sales. Born in 1977, she is considered one of her generation’s finest painters. Lynette Yiadom Boakye work casts a gaze on the black community, while her brilliant brushwork and fertile imagination ignites a reinvention of realism.