“Maggi Hambling here”, boomed a deep rasping well-spoken voice down my mobile, ‘I was told to call you back so here I am doing as I am told’. And as unlikely as it may seem that the indomitable Hambling would ever do as she was told, I find myself interviewing her mid-Howard-Hodgkin exhibition at the National Portrait Gallery.

“in a period when many artists try to be sexy and only end up being commercial and competitive, she’s the real thing.” John Berger

Talking to Hambling surrounded by the paintings of the recently deceased Hodgkin was a profoundly moving experience as I had just come hot foot from Hambling’s latest exhibition, Edge at Marlborough Fine Arts, which deals face on with motifs of mortality.

My first question to Hambling was about Hangover, described in the catalogue as oil and cigarette on canvas. A festering portrait with dark, drawn and indistinguishable face, and grotesque mouth puffing upon an actual cigarette entombed in paint, acrid smoke trailing across the canvas. ‘I wanted to paint what a bad, stonking hangover really felt like’ Hambling explains, not missing a beat when I ask about the poignant juxtaposition of this artwork in relation to her painting Lungs, which brutally illustrates dissected blood-filled bronchi bleeding trails of blackened turpentine. She describes it as a ‘self-portrait depicting the state of my life’, but all of this is said with great humour from one of the most controversial and beguiling contemporary artists of our age. Roaring with laughter she says ‘it is one of my rules in life never to be photographed without a cigarette’ and without any sense of irony goes on to say ‘we smokers are a dying breed, an endangered species.’ 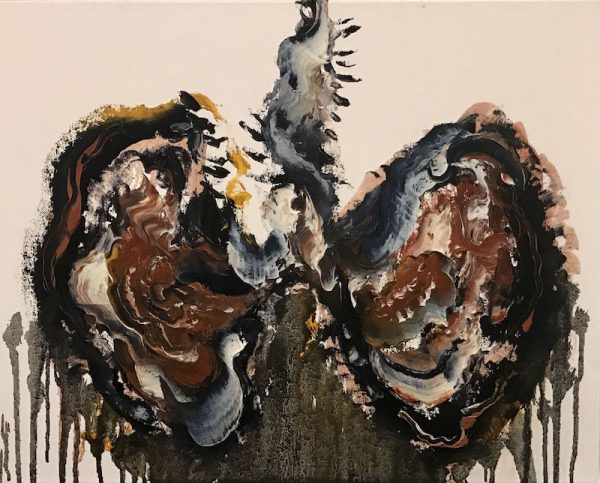 Nature facing extinction is the underlying narrative of Hambling’s’ latest offerings, the anguished artist not only looking inwards but the horrified human looking outwards. The internal exploration of fragility paralleled by the external observation of a threatened world, Hambling says of her Edge series paintings ‘they represent a long lament and anger at what we are doing to our planet.’ Large-scale landscapes, with portentous crimson skies and the signature blackened bleed of paint, communicate Hambling’s heartfelt cry about global warming, she elucidates “great paintings like those of Rothko feel as if the painting is happening right in front of you, the ice caps melting in front of your eyes…”

The theme of planet and species living on the edge is further probed in Hambling’s hand coloured bronze sculptures. Cull – blood red paint gushing from the gaping gash of a tortured marine mammal in the last throes of life. Atrophied bird – paralysed wings drenched and drowned in ominous grey oil. Survivor – a flesh like and disfigured lump dragging itself forward. Haunting pieces that remain etched in the memory.

Working between her studios in Suffolk and London Hambling tells me that she likes being in two places, ‘it allows for pauses away from paintings’, although she admits to being her own fiercest critic ‘I did destroy a lot of work but this lot got past in my quality control’. Self-criticism is key to the artist, harking back to an Ipswich art teacher who engrained in Hambling the importance of being her own best critic.

However in the midst of the doom and gloom of her perception of a self-destructive world Hambling’s wry humour is ever present, none more so than in her satirical bronze Politician, a gory and glorified orange pink slobbering head. She says ‘everyone thinks it is a portrait of Trump but I did it two years ago’. And before I even have the chance to ask, she snorts ‘yes it is hollow’. 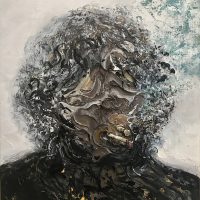 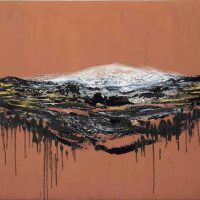 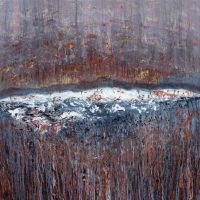 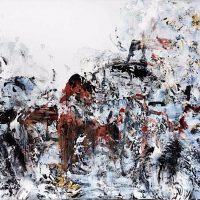 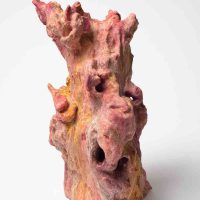 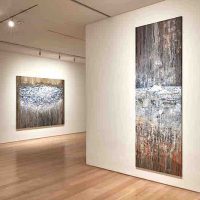