Now in her mid-70s. Maggi Hambling is a senior figure in British art. She doesn’t have much presence abroad. Foreign museums own very little of her work, though there are one or two items stranded in China. If you look through the catalogue of her current show at the Marlborough Gallery in London, you’ll find few exhibitions outside of this country. However, there was a show at the Hermitage in Saint Petersburg nearly ten years ago.

There can be no denying the impact of Hambling’s work, now on view – ELS

She has been represented by Marlborough since 1996, which means that they took her on comparatively late in her career, at a time when the gallery was starting to drift away from the pre-eminent position that it once enjoyed in the British art world. Francis Bacon, Marlborough’s top-ranking international artist, was already dead by that time – he died in 1992 – and had been wriggling out of the gallery’s grasp sometime before that. The great push for proper recognition for women artists was only just beginning in the mid-1990s. 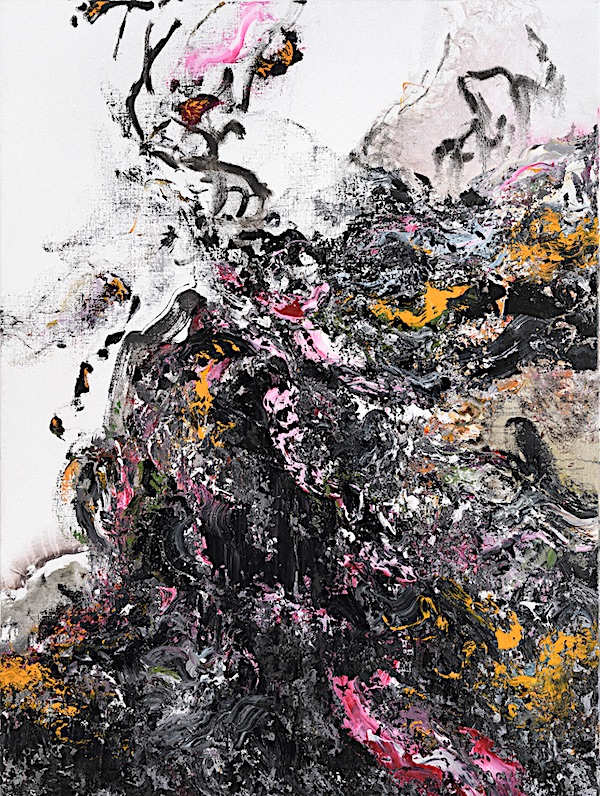 Nevertheless, there can be no denying the impact of Hambling’s work, now on view at Marlborough. Pretty much, everything is recent. Some paintings date from just before the Co-Vid outbreak. Some have been made during it.

Hambling isn’t a colourist. Almost all of the paintings on view are monochromes, or very nearly so. One at least – a self-portrait diptych – incorporates words, though you have to puzzle to make them out. It is not the only self-portrait in the exhibition. Hambling, like many leading contemporary artists, seems to be fascinated by her own appearance. There are, however, quite a number of other portraits in the show, for example, some likenesses, made recently, of Hambling’s mentor Lett Haines, who died in 1978. There is also a long series, increasingly ogre-ish, of a man or men laughing. One of thee is identified in the catalogue as an image of Francis Bacon, painted in 2018. The other subject or subjects are anonymous. It is the laugh that counts, not the likeness. These powerful, but undoubtedly rather sinister pictures don’t owe much, if anything., Bacon’s own way of painting. What they do recall is Kokoschka. Hambling, here, seems to be recalling, or even impersonating, the German Expressionists of the early 20th century.

There are, however, other themes in the exhibition. One of the works I liked best features a birdcage. At first, when you look at it, it seems at first as if the cage is full of a mass of fluttering birds. When you look more closely, you find that it contains, jammed into it, not birds but a panic-stricken human figure, perhaps on a rearing horse, a counterpart and critique of J-L David’s famous image of Napoleon Crossing the Alps. Or maybe it’s a hybrid monster: a man’s head on a horse’s body.

Other paintings offer messages that are more easily interpreted. They represent dis-empowered animals – a rhino with its horns cut off, an elephant without its tusks, a disconsolate lion imprisoned in a zoo.

Though the majority of the paintings on view were made before the CoVid outbreak, the exhibition, with its powerful and often sinister vibe, seems extraordinarily appropriate to the strange epoch we are now living through. If some images – those for example of Lett Haines and Bacon – are retrospective, the exhibition as a whole seems like a directly prophetic event.