‘I first came to notice this painting [Kerze, 1983] in 1988 when it was used on the album cover of Daydream Nation by Sonic Youth. It seemed to extend the mood of the music and got lodged in my subconscious; now, more than 30 years later, this feeling of pathos has started to reappear in my work.’ – Gavin Turk

This month, Gavin Turk unveiled a series of meticulously rendered still lives of candles after Gerhard Richter’s renowned photorealist work. What has changed is the light. Erasing the flame, Turk depicts soft curls of smoke, replacing Richter’s glowing immediacy with the gentle weft of romance, of a love snuffed out. Opening in concert with Queen Elizabeth’s state funeral, we cannot help but read into this set of subtle, paired-down works the notion of an ending. Each painting articulates a haunting pathos. Relentlessly challenging notions of authorship and the value of originality, Turk often blatantly references modern masters – whilst setting himself the unenviable challenge of transforming the subject in some meaningful way. Whilst he has snuffed out the candles, the paintings have a luminous stillness; pale smouldering columns echo in the soft duotones behind. We sense this might be the calm before the storm, a nostalgic pause before this nation sets about remaining itself in relation to another monarch. 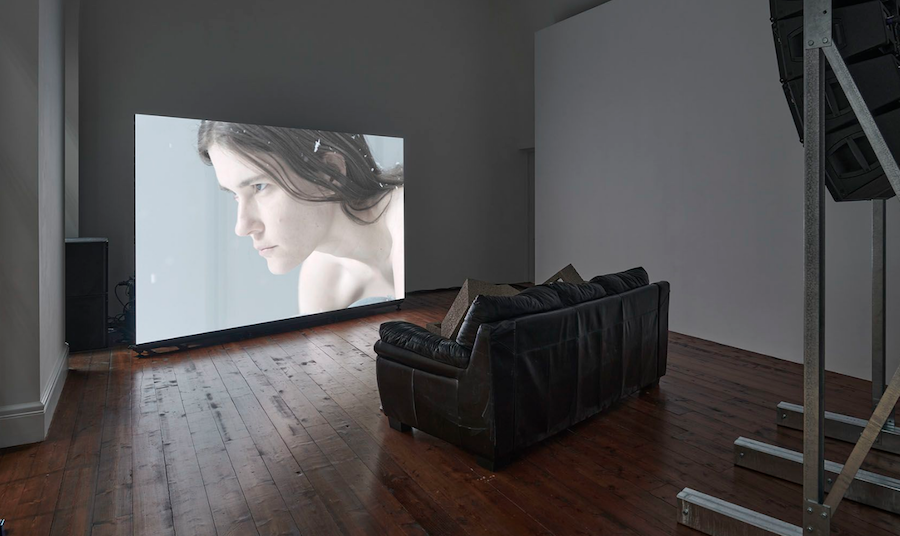 In the first show to span all four floors of Sprueth Magers’ elegant London gallery, she has created a near Gesamtkunstwerk (a term coined by Wagner to define a synthesis of arts) deploying a vast range of media (paintings oil and aluminium; delicate intimate drawings, film and sound works) that emphasise two things: Imhof is a brilliant draftswoman, rooted first and foremost in the visual arts; but she completely denies easy categorisation. Through a staging of props with original drawings and paintings, Imhof plays a kind of thematic hide-and-seek – that feels as close as one might be able to get to the taste of desire for something illicit. Like sex. We enter a locker room first, with the suggestion of disrobing, and notice some of the doors left ajar to reveal concrete blocks. On the back wall is a monumental oil painting, set into the wall like a giant flatscreen, where a blurry, shirtless, masked figure moves ominously towards us. Painted from a still of her long-time collaborator Eliza Douglas, its creepy energy seeps into the room, teasing out in another sizeable dark panel opposite, scratched with lines. “It feels like I am back at a school and about to be bullied,” my friend Lidia says. “Yes, that is a common response,” says the black-clad, gender-fluid gallery assistant sitting on a bench nonchalantly reading a book. Is it a prop? They do not say, and we dare not ask. All I know is that upstairs in a pristine white corniced gallery room is a set of drawings so achingly beautiful, elongated fingers and limbs like tentacles reaching out into the void. I will be lusting after them for life. 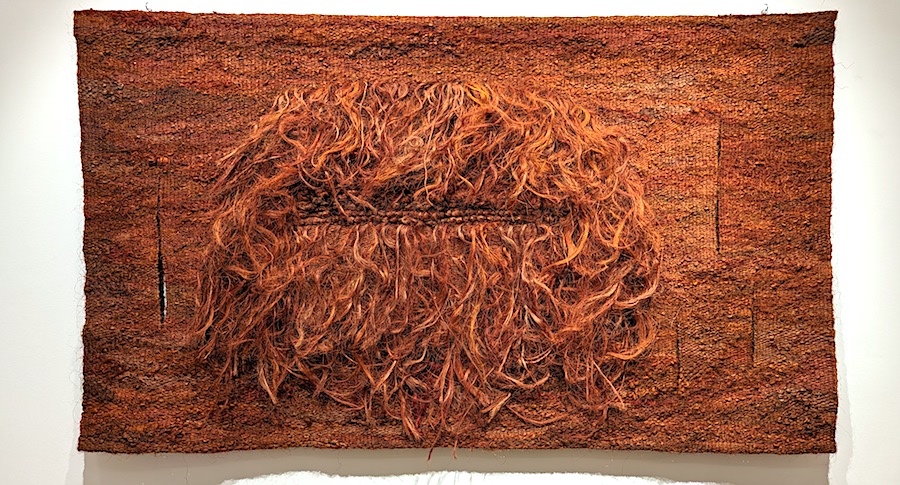 It is not often we find ourselves luxuriously alone with a masterpiece, a mind-shaping experience that informs everything else we see. Yet, stepping out of the elevator on the second floor of the Marlborough Gallery, I had this privilege. On the wall at the back of an intimate viewing room is an abstract tapestry seeped in rust red, that intoxicating colour so bound to the scent of pale skin by the author in Perfume, quivering with the strands of unbound hair. It is like getting too close to the back of a stranger’s head, wholly overpowering and overwhelmingly intimate.

Staged to coincide with a major retrospective opening at the Tate Modern, Magdalena Abakanowicz – which introduces another generation to the artist’s phenomenal ‘Abakans’ – three-dimensional woven sculptures – these wall-based works pre-figure that moment. Laid bare, we can sense the loving, sensual relationship this Polish artist had with her chosen material. Born in the 1930s, Abakanowicz developed her practice under Soviet Occupation. Whilst it is suggested she was redirected to weaving – deemed more utilitarian for female artists – Abakanowicz thoroughly embraced and transformed the medium. It is impossible not to see it as a preference and choice. First shown in 1962 at the Biennale of Tapestry in Lausanne, these monumental works woven in wool, Sisal, rope and horse hair are now considered precursors to installation art.

Struck by the weird autonomy of Abakanowicz’s work, in 1964, the art critic Hanna Ptaszkowska named them Abakans, a name the artist adopted. At first, the artist described her installations – fibrous works so vast and cavernous they might enfold and consume you – as situations. Hung in clusters from the gallery ceiling, drooping with biomorphic folds and cascading with frayed strands that suggest hair or the pelt of a strange wild thing, walking through them is to be immersed in the primal energy of an ancient, mythical forest. Later she evolved the concept to “environments”, which we will explore in our review of the TATE show. 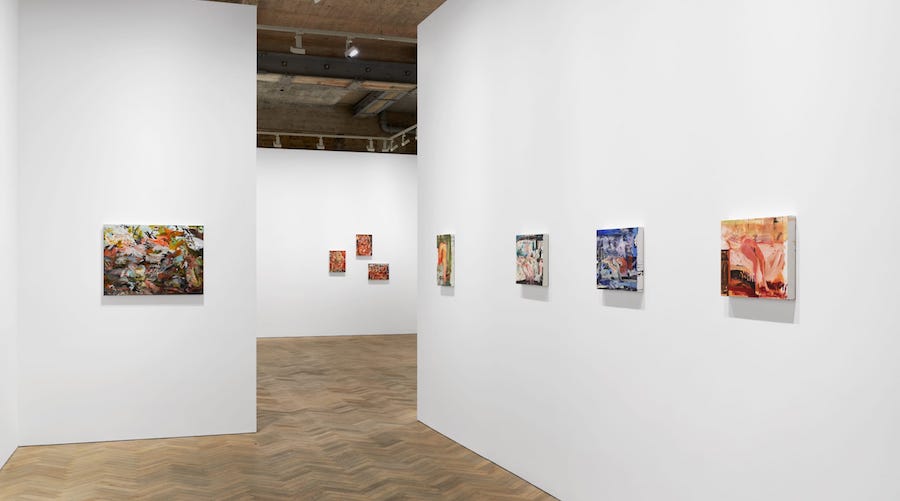 For the Triumph of Death at Blenheim Palace in 2019, Cecily Brown realised a corpus Maximus of significant works, a monumentally energetic response to the collection’s historical paintings and privileged horizons on the estate.

As if you looked through the keyhole” – E Degas

Following this, she completed a sensationally large commission for the Courtauld, replete with her – now signature – male nudes hovering between figuration and abstraction, borrowed from art history. Now on at Thomas Dane is a sequence of small, intimate works, many tightly focused on the female form in and around the bedroom. What is it about the portrayal of an unmade bed in British art? From Tracey Emin’s stained sheets in “My Bed” to Lucian Freud’s Woman in Bed (now showing at https://gagosian.com/exhibitions/2022/friends-and-relations-lucian-freud-francis-bacon-frank-auerbach-michael-andrews/), the stated intimacy of this recurring motif seems central to Brown’s current set of works. It also allows the painter to show her dexterity. This shift in scale proves that the artist is at ease in both the looser gestural and the quieter, contained focus. “Because the grands formats are possibly where you lose your breath; small paintings are probably where you lose your mind.” Paintings are dense and light at the same time, reference to landscapes invites you in ‘it [is] a lesson to me in slowing down, looking carefully, and being open to new work. […] Each painting contains a special quality of light and air, and most refer to a landscape space, one that asks us to make our way through thick paint to the spaces behind.’ 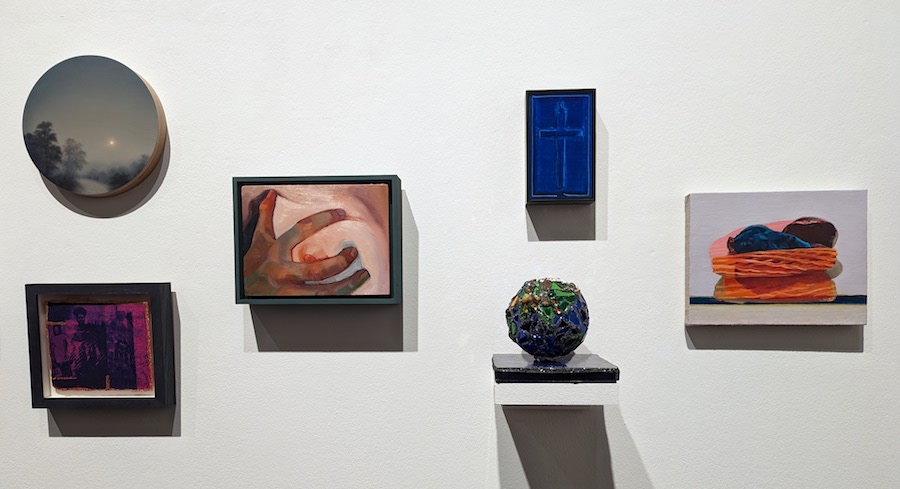 One of the busiest openings this month, Small Is Beautiful, was first introduced by the gallery in 1974. Presenting a group of works across various media at a fixed scale of no more than 7 x 9 inches, hung in a variegated line at eye level, this show provides a rare opportunity for collectors. Previously tethered to a theme, for instance, Homages in 1993, War & Peace in 2003, or Who’s Afraid of Red, Yellow and Blue? in 2013, Small Is Beautiful is now conceived as an open invitation for artists to explore scale concerning their practice. Participating for the first time is Sean Scully, who this year also curated the group show Hidden UK, Hidden Ireland at Flowers Gallery Kingsland Road. Also exhibiting for the first time are interdisciplinary artist Adelaide Damoah, photographers Cody Cobb and Mark Duffy and painter Luke Silva. Returning artists include John Loker, who has participated in every Edition, Amanda Faulkner, who has shown with the gallery since the 1980s, Carol Robertson, who first showed at Flowers in 1994 and Ishbel Myerscough, who has been represented by the gallery since 2011. 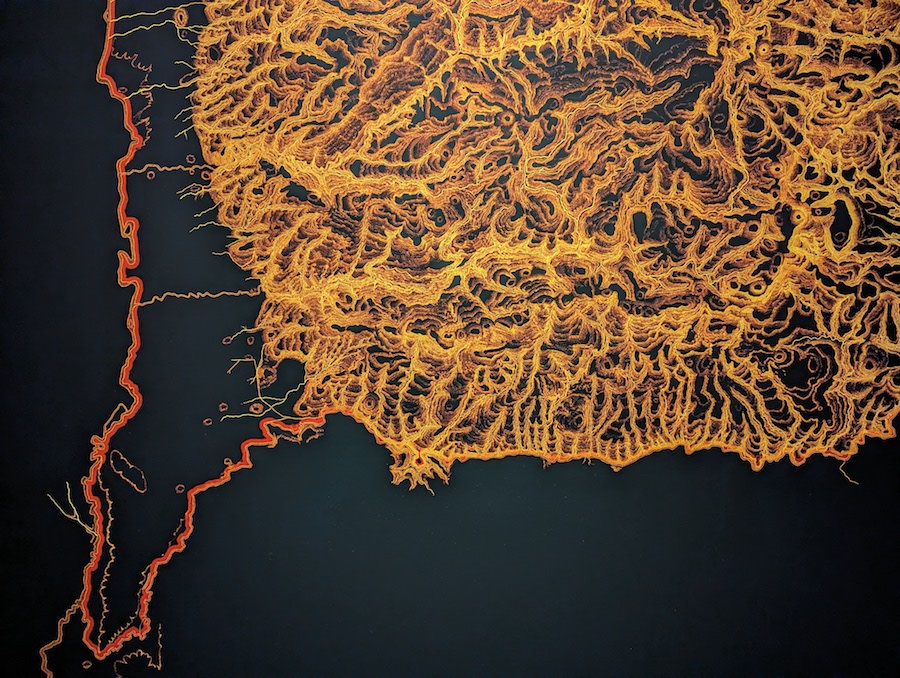 For Dor Guez’s first solo exhibition with the gallery in London, the artist was in conversation with the author Ben Luke. This gave an important biographical context to the works shown. Guez was born in Jerusalem to a Palestinian family on his mother’s side and a family of North African Jewish immigrants on his father’s side. In this body of work – a photographic series, sculptures and a video installation – Guez raises questions about the role of contemporary art in narrating unwritten histories. Embodying both sides of this conflict narrative, Guez became interested in the idea of a private archive that might allow for a more nuanced story to emerge. Guez is first and foremost an academic, and the phrase “Knowing the Land” was coined in 1845 by Joseph Schwarz, one of the first geographers of Ottoman Palestine. Today, Knowing the Land Studies have become more recognised as an interdisciplinary, no longer confined to the subject of Geography.

But thinking about something and showing it – like mapping – are two very different things. By referencing “Knowing the Land” in the context of the 1948 British Mandate period in Palestine, Guez’s work highlights the disconnect between colonial exploration of the Levant and its inhabitants. Guez gives us this experience – a sense of the unknowable – through mysteriously rendered works drawn from found archival elements, including maps. During the conversation with Luke, Guez discussed his new series of prints titled Amid Imperial Grids (2022), shown in the gallery’s basement. In these, he manipulated negative images of the first modern maps of Palestine dating back to 1885. Based on these maps, two geographical grids were established at the beginning of the 20th century: “The British Palestine Grid” and “The French Levant Grid”, divided on the map by a thick pink line. In the process, Guez erased all human markers from the maps that categorised the landscape. Names of roads, towns, borders, villages, cities, mountains, and valleys were all removed. To Luke, the works had a very human aspect, something akin to magnified images of skin. Going downstairs to see them displayed on the dark walls, I had an altogether different response – the hot orange tributaries and neon pink lines looked like lava engulfing veins—fire for blood. Although out of context, we are not fully able to understand what we are looking at, our gaze is held by an unmistakable beauty.