The exhibition ‘Model Maquette’ arrives in a protracted time of pandemic fright, a time when most people’s worlds have literally shrunk. Suggestions of either imaginative flight or claustrophobia become all the more poignant. An attachment to the screen as the standard access to a larger world seems mostly unquestioned. Nonetheless, we have arrived at a welcome point when we can again have the opportunity to have an encounter with art.

It is possible to see this exhibition as turning on axes of imaginary, fantastical representation and lucid construction.

Some of the artists in this exhibition choose to present their models as two-dimensional artefacts, windows onto another world mediated to varying degrees and ends.

Suzanne Moxhay’s works are exceptional in the seamless application of a well-honed technique. The vehicle she employs presents the alternative world of dreamscape with an uncanny veracity. Perhaps this turns on what we can still sense as the evidential and documentary nature of photography, or else it is the dark and unresolved spaces that always comprise a part of her images, suggesting the truth of a half-light. As is often the case in this exhibition, interiority is part of the terrain; in Moxhay’s work, it is often coupled with the suggestion of another possibly vast space glimpsed through a window or half-opened door. Symbols of flight and illumination abound, yet they are confined to dusty and decaying attic interiors where darkness and nature are about to engulf, or else wakefulness intrudes, which might come to the same thing.

Symbols of escape, entrapment and interiority abound in the set pieces of Isabel Young in the form of precision-cut miniature ladders piled into the corners of boxes where windows look out to space or else mirrors reveal our own gaze looking in.

Sasha Bowles’s works are framed like toy theatres containing collaged elements, feeling provisional: the model as something in progress, yet to be realised. They make the viewer a voyeur, although the jump in scale caused by placing one work on a found occasional table suggests something akin to an ‘Alice in Wonderland’ imaginative leap.

In the works of Russell Herron, Tom Down and Marc Beattie, painting and drawing is enlisted to portray a model. In the case of Russell Herron, a mundane and overlooked material is studiously copied asking us to pay attention not only to the poor material but also to the artist’s long-term concern with representations of self, the pretensions of art and the individual’s place in this. Mask-like faces are torn and scratched into corrugated cardboard then copied in pencil so that the result could, at first sight, appear to be a photographic image.

It is interesting to note how highly crafted verisimilitude is used by many of the artists included in this exhibition. The mirror image would seem far from the notion of a model. Possibly the actual models are just too ephemeral or else the mimetic representation is used to persuade the viewer of the models’ tangible feasibility. 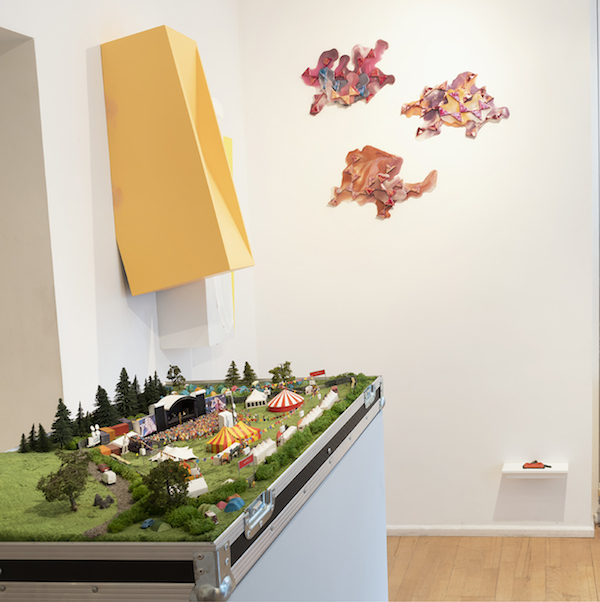 Marc Beattie employs a tromp l’oeil effect in painstakingly made paintings in that most fragile of mediums, watercolour. A lattice of squares slowly becomes apparent, leading us into the painting process. As source material, he uses figures he has made out of packing tape printed with the word ‘Fragile’. There is an irony in his using as subject matter what may be the first thing you dispose of in order to unwrap and hungrily view a recently purchased painting.

Tom Down also chooses to replicate a model he has made rather than present us with the raw material. In this case, the grandeur of landscape painting and our romantic inclinations are brought into question as we regard a diminutive painting that chooses to focus on the pathetic nature of the fake or prop. Little landscapes are shown on inspection to be constructed out of fragments of discarded packing materials just held together and yet carefully rendered with the time-honoured medium of oil paint in a modulated and melancholic palette. However, we should perhaps recall the old masters’ studio-bound reconstructions of landscape chosen and tamed.

Louise Bristow’s subject matter could be seen as utopian futures once imagined, both the collective and personal. These are carefully represented through provisional tabletop arrangements of ephemera which seem to reference communist visions, Corbusier’s modernism, children’s toys, atomic models, family snapshots and more. Despite this extraordinary diversity, the arrangements feel strangely cohesive. The palette seems to be derived from the children’s encyclopaedias of everything, published in the 50’s and 60’s. Playful and serious, perhaps the seemingly endless encyclopaedic endeavour is the very thing that makes Bristow’s vision compelling; the extended horizontal format increases this sense of continuum and partial knowledge. The colours are wonderfully vibrant whilst being at the same time deeply nostalgic.

In the work of Jon Alibone, the glass is darker still: the representations of barren landscapes seem to have been translated through photography, repeated erasure and rewriting to become a painting no longer sure of the mimetic impulse. Filled with prophetic doom, they record a desert landscape filtered through various temporal screens, both mechanical and handmade, with a curious echo of cinematic stills.

Kim Keever creates an arguably more joyous vision with photographs of chancy staged events. Swirls of coloured pigment whirl through something resembling hallucinatory tropical landscapes. Photography is enlisted in one of its accepted modes, that of capturing a moment, albeit one that is again significantly staged in a way that could be seen to resemble a chemical experiment.

In the work’ homeless man’ by Thomas J Ridley, miniaturisation suggests the pathos of an individual made into a statistical digit, not least as the tiny painted bronze is offered as an edition of 1111. What we are definitively not presented with is the physical reality of the debased condition of a fellow human being and the feelings of responsibility that might entail. This highlights the ambiguous moral terrain of the miniature and representation: as a world, we can peer into and yet remains distant, it is a world we can enter and can even overtake us in the sense of a reverie, for us only to come back to the reassurance of the frame.

At the other end of the scale issue, Juliette Losq presents us with a mise en scène stretching from and across the inky reflective floor, then up over our heads. The work is made of fragments of her carefully constructed monochromatic tonal ink wash drawings, hanging like theatrical flats from black wooden beams which mimic the structure of the gallery ceiling. The drawings are themselves layered in a deliberate way that recalls printmaking. The structure builds to, or from, a central void of white paper representing sunlight. The physical site which Juliette has constantly returned to and drawn from is poised on the edge of being returned to nature. Curiously this place has also often been used as a location for filmmakers and photographers, and in this iteration, we see the artist’s interest in the diorama and stage set. Signs of human habitation and use remain, yet we feel that the actors may have left some time ago. Creepers and vines cover the boggy landscape, and water seeps into brickwork. The ambiguity of this work comes in part from how we view nature’s reclamation: as a gothic nightmare or else welcome redressing of imposed man-made order. Equally, the sun’s blinding presence in many images acts notionally as giver of life whilst it also effectively obliterates part of the image.

In the small painting and constructed model by Melanie Miller, nature is seen in quite a different way as a poetic and romantic source of inspiration, regeneration and solace. The models made from fragments of the natural world, with which she fills her studio, serve to provide the material for her paintings which celebrate this intimacy.

An altogether more urban chaotic view comes across in Gail Seres-Woolfson’s installation; technology is enlisted in the form of video projection and sound along with collaged elements found in and representing the street. All this is shown across skewed scaffolds, presenting a kind of anti-model, potently redolent of the contemporary city in flux.

Bob Hinks’s sardonic representation of a miniaturised festival is framed by a readymade flight case. This ready to rock fantasy is also ready to travel… only not now. Even if it could in our’ socially distanced’ times, the vision is somewhat too childlike and bucolic to be a reality. It is cleverly cordoned, not only by the reality of the human scale flight case but also a secondary miniature steel fence separating the tiny revellers from any connection to an equally tiny ancient henge depicted on a distant hillside.

Arguably the works of Alexander Hinks, Samuel Zealey and Patrick O’Sullivan explore a quite different sense of what a model is: diagrammatic, haptic and constructed; they impinge on our shared physical space. Here the sense of model seems to reside in an analytic constructive sense of making.

The notion of a frame is directly expanded in Alexander Hinks’s recent works. A fragmentary tessellated pattern drifts across the gallery wall suggesting a never-ending extension of space. Not so much a window to another world as an invasion. This is matched by an aqueous pooling of mingled coloured resin, an organic corollary which is possibly warring with the measured and precise geometric incursions into the gallery. These are not only opposing forms and processes; the liquid colours also have the potential to be seen as an illusory atmospheric space. There is also a question as to whether there is a final definitive form; rather these units could appear to combine in many varied ways. Their presence is felt somewhere between appearance and disappearance.

In Samuel Zealey’s work plates of steel often balance with a sense of the provisional and the potential of imbalance and danger. Here he presents some geometric drawings outlining the construction of paper aeroplanes. One of these is realised as a large-scale steel structure that has nose-dived into the gallery floor somewhere near a window. There is humour and pathos in what is also a curiously elegant structure.

Patrick O’Sullivan’s work is poised between the contingent and chosen. The blocks which make up this work suggest something utilitarian, perhaps due not only to structure but also in their relation to human scale. The faces of these units are dissolved with solid colour as it becomes inherent to the form; one has articulated surfaces so that the ambient light and shadow reflect and question its solidity. A third element has a skein of paint applied, giving the coloured pigment its own physical presence, separate yet symbiotically related to the structure as a ground. The viewer is drawn back to the act of making and touch in an otherwise seemingly inscrutable object, which as a whole acts as a gentle and studied questioning of physicality, appearance and presence.

It is possible to see this exhibition as turning on axes of imaginary, fantastical representation and lucid construction. How the individual works operate on the psyche seems determined by how we choose to frame our sense of reality.