The new Modigliani show that just opened at Tate Modern is a very splendid affair, which doesn’t seem to offer a single weak link. Unlike, for example, the current Impressionists in London exhibition on view at Tate Britain, you don’t have to plough through a great deal of second-rate, somewhat irrelevant stuff in order to get at the real meat. The exhibition is also provided with a rich and informative catalogue. The majority of the excellent texts have been written by women, which, however, as will appear in a moment, seems slightly ironic, given some of the major themes present among the exhibits.

There is also something hauntingly Japanese about many of these paintings. – ELS

The event also offers a very successful use of modern technology. Put on one of the headsets provided, and you find yourself precipitated into a startlingly convincing 3-D simulacrum of Modigliani’s ascetic studio in early 20th century Montparnasse. This feature, provided by a British outfit called Preloaded (www.preloaded.com), is the best thing of its sort I have ever seen. For a moment, you actually think you can smell the smoke of the artist’s cigarette, left burning on a side table beside his easel. Hot tip, pre-book your timeslot, queue up and get in there as soon as you enter the exhibition.

What is on view, nevertheless, offers a curiously blinkered view of the artist and of his place, both in the grand sequence of Western art, from the Renaissance onwards, and in the history of the Modern Movement.

Just consider the following: Modigliani, due to chronic ill health, had a very short career. Italian by birth and Jewish by heritage, he was born in Livorno in 1884. After attending art schools in Florence and Venice, he moved to Paris in January 1906, aged 22, to begin a career as an independent artist. In Paris, he inhabited, successively two-quarters of the city, first somewhat fading Montmartre then the up-and-coming Montparnasse, that was then attracting artists from all over the world. He became well known in this diverse community. Among his friends were Picasso, Soutine and Diego Rivera (with whom he briefly shared a studio).

Soutine (Who currently has an exhibition on at the Courtauld Gallery, London) shared a Jewish identity with Modigliani. They were outsiders in a French society still reeling in anti-semitic sentiments following the Dreyfus Affair. People often associate religion with Soutine’s work. They tend to forget Modigliani’s Jewish heritage, because he was Italian, though the reference is firmly there in the Tate catalogue.  In addition, both artists often chose ‘outsiders’ -unimportant, now-anonymous people, as subjects for their portraits. Cézanne did the same thing. The message of this is, bluntly, that the artist – what he feels and thinks – counts for more than what the subject of the portrait personified. It was Jean Cocteau, I seem to remember, who remarked that Modigliani’s portrait paintings were fundamentally portrayals of the artist, not the sitter.

Modigliani remained in Paris for the rest of his life, except for a brief period in 1918, when he moved to the French Riviera because Paris was then under bombardment by the Germans.

Moving back in May 1918, he found himself increasingly well known. In 1919, for example, there was an exhibition at the Mansard Gallery in London of the latest French art, in which Modigliani was prominently featured.

The good times did not last. In January 1920, Modigliani died of tubercular meningitis, having suffered from tuberculosis since his childhood. He received a massive funeral at Père Lachaise. As the sculptor, Lipchitz later wrote: ‘I will never forget Modigliani’s funeral. So many friends, so many flowers, the sidewalks crowded with people bowing their heads in grief and respect. Everyone felt deeply that we had lost something precious, something very essential.’

What is missing here, and missing from the exhibition, is any mention of the fact that Modigliani spent a large part of his artistic career living and working in a Paris drastically changed and affected by World War I. If you look at the Tate Modern show, this conflict might never have happened. Nothing alludes to the war. Though the show is rich in portraits, not one of them shows a man in uniform. Many of the subjects of these portraits, made both before and during the war, were not French nationals, but were, instead, members of the cosmopolitan art community that had come to settle in Paris.

This determination to ignore the war was, in fact, typical of the art produced during the war years in France. A very few major Modernists made paintings that tackled any aspect of this theme. One of the few was the Cubist Fernand Léger, who actually served at the front and was injured in 1916 in a mustard gas attack at Verdun.

What the Tate Modern exhibition consists of is essentially three bodies of work.

There is a room of stone sculptures, heads very much affected by the then-new interest in ethnographic art, African tribal art in particular.

There is another group of magnificent female nudes, considered very controversial when they were first exhibited, in large part because they – without emphasis – depict features of female anatomy (pubic hair and underarm hair) that the great masters of the past who tackled such subjects politely edited out. Interestingly, a substantial proportion of these provocative works remain in private hands, though others have by now found their way on to the walls of public museums. One concludes that, like the equally celebrated female nudes made by the likes of Titian and Rubens, they were essentially made to be looked at by the rich, and in some cases continue to serve that function in a satisfactory way.

The vast majority of the works on view are portraits, almost, though not invariably, single figures. And there is just one landscape painting with no figures present.

Some of the sitters, as with Cézanne, were depicted over and over again. Cézanne painted multiple portraits of his wife. Modigliani painted Jeanne Hébertune, the fiancée who threw herself out of a fifth-storey window immediately after he died.

As with Cézanne, a number of the sitters were humble people who remain unidentified. During his brief period in the South of France in 1918, for example, Modigliani made a number of anonymous child portraits. The curators of the show note this deviation from his usual choice of subjects, but it doesn’t seem to have occurred to them that children at this point became the artist’s sitters of choice because the fathers he might have painted were all at the front. These kids were potentially, at least, orphans of war. The nearest Modigliani got to painting war pictures. 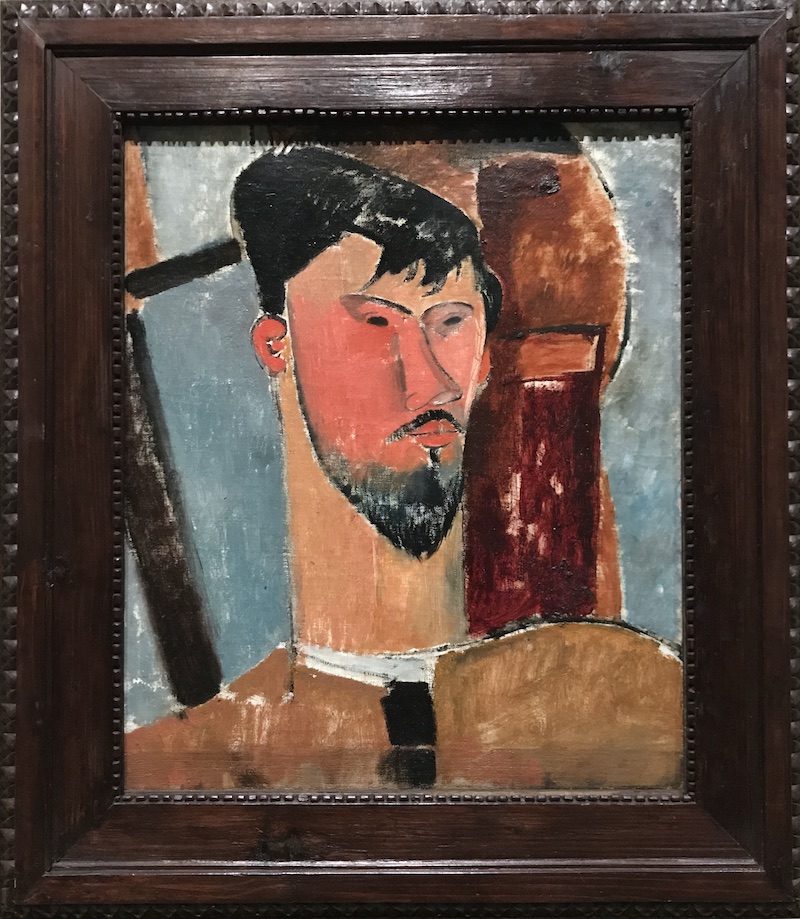 Though Modigliani is presented at Tate Modern as a Great Modernist, he doesn’t seem to me in the least Modern in any of the usual senses of that over-used adjective. On the one hand, he descends from the Italian and French Mannerists of the early 16th century. There is a definite kinship, in his nudes, with the elongated female nudes produced by the artists of the School of Fontainebleau. There is also a kinship, in Modigliani’s images of neatly bearded male dandies such as his Polish dealer Léopold Zoborowski, with the portraits produced by artists such as Pontormo and Niccolo dell’Abate.

There is also something hauntingly Japanese about many of these paintings. They inhabit a place that seems to have a close kinship with the ‘floating world’ – the world of raffish entertainment in Edo – depicted in Japanese 18th and 19th ukiyo-e prints. One notes the little-pursed mouths and slanting eyes.

One thing then, none of the works in the Tate Modern have anything to do with is the self-righteous political moralism of a great deal of what we now celebrate as contemporary art. For better or worse what we are looking at this splendid show is a later phase of the separate, alternative Bohemian world, shut off from politics, that formed in Paris after the catastrophe of the Franco-Prussian War. That is now long dead and gone.