Nan Goldin is an American photographer who has chronicled her life for art gallery-goers. Her themes include intimacy, moments from an encounter with the HIV crisis, living on the urban edge, the LGBT community, youth and love. She is called the voice of a generation. That sounds heroic and maybe it is but The Ballad of Sexual Dependency is not the usual type of epic. It’s missing the bombast. It’s humble and domestic. It’s local.

Although I recognise Ballad is work made on some kind of an epic scale. Presumably, the size of Goldin’s project grew in increments rather than following a life plan. This isn’t art made for the art CV. It comprises nearly 700 35mm photographs taken between 1970 and 1986 shot with available light in the Bowery neighbourhood of New York. At the first showing, she hand chose the images while friends chose the soundtrack. It is collaborative, within her community, Goldin creating new edits at different points. 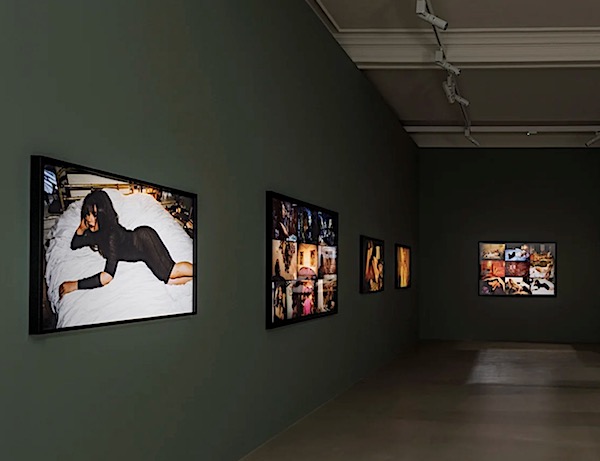 Although this is so much urban America, I recognise my own young life here, squatting in London. Living with anti-establishment community, many not working, many of us pursuing art rather than convention, keen to live a bohemian life as if that was the end in itself. And the drugs that coursed around the veins of friends and our extended family of deliberate misfits fuelled the lifestyle we lived. I can recognise some of what I was, and those of the world of humanity in which I lived, here in this photographic Ballad. I’m not the only reviewer to feel that sense of coming home. Let’s take this quotation from Flora Alexandra Ogilvy for Arteviste, reviewing the show at the MoMa in 2017. ‘As a girl who has spent much of her youth running around New York in the company of a diverse array of artists, musicians and photographers, taking my place in the audience felt like the end of a pilgrimage or perhaps just an important stop along the way.’ I’d nod if we were having a conversation.

The music is heard even silently when each photograph is seen. I don’t really need to hear the tracks. It feels more that Goldin needs it, rather than myself. Even without sound, I see a far off land of music in which men and women lived in riffs and lyrics. The philosophy of the desperate love song in which emotions are more important than sense is Romantic – with that capital ‘R’.

Goldin is perfectly aware of her own Romanticism and her obsession with love. She doesn’t flinch or squirm from this relationship of her art and so-called popular music. In this way, her work is pop art too. Even the title ‘The Ballad of Sexual Dependency’ comes from music, from the art song of a previous generation, popular among lefty artists during the 70s and 80s, from The Threepenny Opera by Kurt Weill and Berthold Brecht, a favourite of the twentieth-century counterculture despite its links back to seventeenth-century street opera, John Gay’s The

The Ballad of Sexual Dependency reaches beyond the gallery photograph. It’s a narrative. It’s a book. It’s the innards of what was everyday life. Maybe it still is. It’s people I saw, some of whom were too cool to be easy. When I shut my eyes and try and remember the photos, I see make-up, mascara, running, open eyes, open hearts, tight dresses, bare skin, short skirts, beds, long legs, intensity. I see the interior as well as the exterior world.

The title Goldin has chosen gives me an emotional route into my own past. I remember the intensity of feeling, the closeness of relationships, that sense of locking ourselves away from the world, living inside a relationship. This was possible once upon a time when we had time. In today’s world of financial constraints, is it possible to live like this? It’s probably hardly desirable as it’s a gateway to loss. Loss of self, loss of sense, loss of a place in the world. But it’s Romantic. 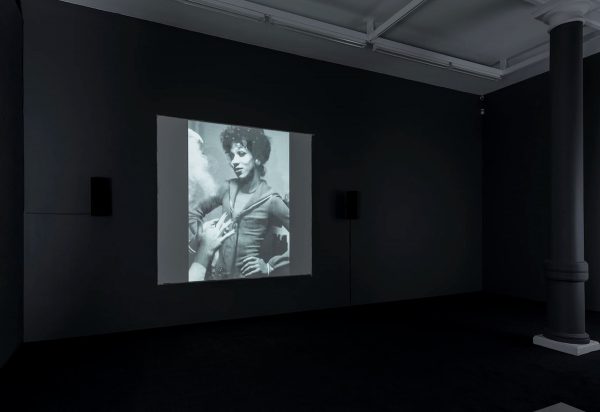 Goldin’s subcultural documentary and celebration makes the gallery artist visitor wonder, well it makes me wonder, what would have been the outcome if I had documented my own life so unflinchingly? Would it echo what she has captured? Of course, what Goldin produces is not just honest, but her lens is also insightful. She is not a witness. She captures with her camera the emotions of these intimate moments. It is her ability to do this and her readiness to do this that lifts her work above most diary work. And she is not manipulating her life and her friends to create this piece. People don’t look exploited by her camera. This is a phenomenal achievement. She works with the cooperation of her subjects. No, it’s more than that. I think The Ballad of Sexual Dependency is a remarkable achievement. She says her work comes from empathy and love, and I believe her. I felt it before I heard her say those words. Her work, strangely, is not uncomfortable to see, even though to see it is to enter such private moments. Because Goldin’s camera feels welcome. There’s a friendship between the subject and the lens. The way that lipsticked smile regards you from that flat’s doorway, it’s one of affection. I become one of the community inside the private rooms.

Memory is something that Goldin is clearly obsessed with. Her book Eden and After was born from her interest in childhood and childhood, and her fascination with the time we spend as children in various ways. But in particular, she mentions our inability to remember anything from our early years, how it moves her that we cannot remember anything about the time before we are three or four. Therefore children, she says, may as well be from another planet (metaphorically). And her daily photography journalling is created by an enhanced human, a human with a mechanical eye. The camera, in her hands, creates a fantastic memory, a superhuman memory, a bionic memory enhanced by the medium of slide photography. She described The Ballad as ‘my form of control over my life. It allows me to record every detail obsessively. It enables me to remember.’

So how does Ballad, such an intimate, period work perform in the Tate? The photographs. The soundtracks. The film. The space. I feel it’s in sympathy with Goldin. Ballad works here. Goldin’s heart takes over this sterile room and makes it warm and human. Her photos don’t need to be situated in an installation in a squat to transport us into their world.

She’s straightforward and hard-hitting without being either of those things. But she’s only a contradiction in the way that humanity itself is contradictory. I feel I have looked through Nan Goldin’s eyes many times in my life. Her gaze is mine from those moments when I have not been concerned with things of the world when I have been focused on the people I am with, sunk in empathetic friendship, the rare moments when I have been uninterested in what goes on outside my immediate human sphere.