As museums and galleries open to eager viewers, I took the easy way out and have only ventured to walking distance galleries. Luckily, this limited geography includes four stellar downtown shows. Two are young women having their first NYC solo shows, and the other pair is from veteran art superstars. All provided much needed divine distraction in these troubling times.

I asked Harry Tenzer, who just conducted a blockbuster sale of Keith Haring’s personal art collection at Sotheby’s to give me his take on the current NYC art world. “Virtually every commercial and academic art institution has undergone an enormous shift due to the economic and physical constraints caused by COVID. While there will no doubt be some immeasurable losses, this is also a moment of unbridled innovation and collaboration. Art institutions have often adhered to very traditional methods, even when attempting to present the most cutting edge artwork. I see artists, galleries, auction houses and museums working together in ways that were unimaginable before March. I see an acceptance of online sale and exhibition platforms, making art more widely accessible. I hope that one of the positive legacies of this turbulent moment will be a permanent rethinking of many 20th century methodologies and a new way of both showcasing and selling art. It ‘sIt’s already happening!” (Harrison Tenzer, VP, Head of Contemporary Art Online Sales, Sotheby’s. 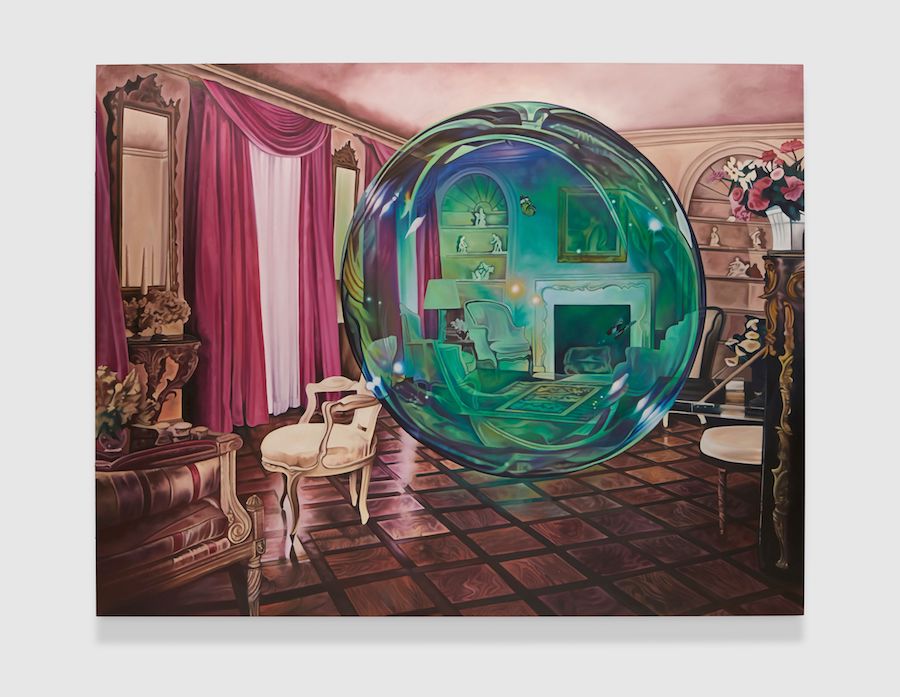 On a recent afternoon, as NYC grapples with increasing Covid fears of an uptick, I walked into Ariana Papademetropoulos first solo show in the city. After putting on paper booties, I sunk my feet into a plush orange wall to wall carpet, as my friend explored a sculptural upholstered rainbow sofa which invited rearrangement.

The young Los Angeles based artist is showing all new works, where her featured watermarks have evolved to crystalline spheres floating through large hyperrealistic landscapes, much of the images sourced from National Geographic magazines. Smaller paintings are part of the artist’s artist’s “symbolist” series and I was especially captured by “Death of a Mermaid.” The almost vaginal folds of a seashell, are embellished with what could be mountains and depicted as shell markings. An enigmatic eye seemingly plucked out of a Man Ray photo, is replete with manicured brow and stares at the viewer. This small-scaled but potent painting is a jewel.

Larger canvases continue the artist’s articulate conversation counterpointing nature with domestic tableaux. “Espulsione dal Discoteca” juxtaposes a weightless sphere with a rural background of an abandoned house on a dirt road, a golden cloud at canvas edge that is both ominous and seductive. Within the floating bubble, a bucolic landscape depicts a traditional garden, blooming flowers, bench and gate. The painting leaps from plebeian reality to a capricious and captivating interior fantasy.

Another large work, “The Shadow of Clouds” repeats the same wintry mountainous range that may have inspired the seashell in “Death of a Mermaid.” This time, snow embroidered mountains are bisected by a gleaming globe. Suspended inside, a vaguely nostalgic and cosy living room corner beckons, with floral curtains and welcoming chair.
By this time, my friends and I had relaxed into the comfortably seductive seating, while contemplating the meticulously rendered and disconcertingly beautiful paintings.

With cinematic focus and bravura painting, Ariana Papademetropoulos is updating surrealism for these fraught and surrealistic times. 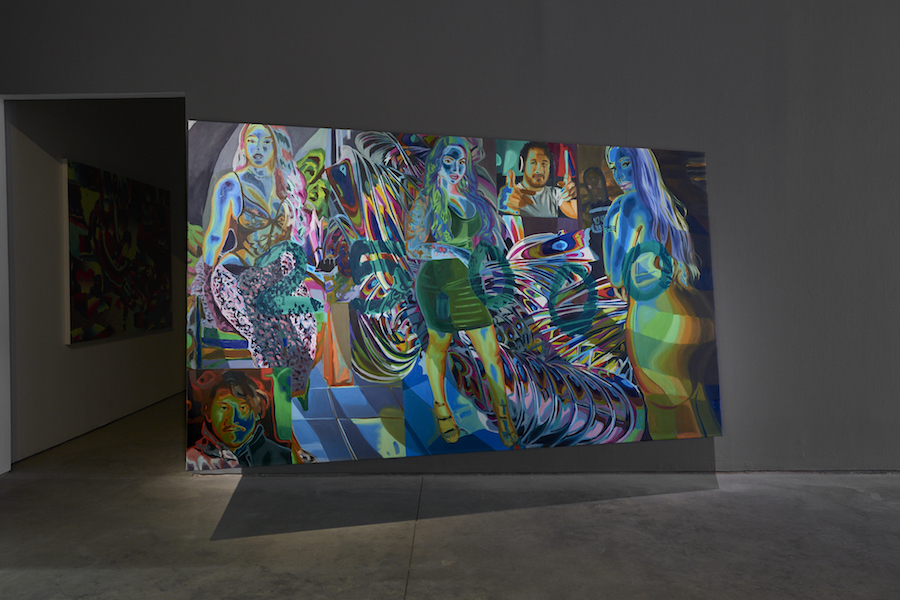 Caitlin Cherry “Crichoues Indignation” at The Hole until Nov 15

Caitlin Cherry has chosen the title of her show from a misspelt Kaye West tweet, where the word “righteous” morphed to a nonlinear abstraction. Cherry, who paints with fauvistic freedom, portrays beautiful, thick, Black women with blue slashed cheekbones and bursting bullseye breasts. These sexualised images take on new power when depicted through the female gaze, upending a long history of women women’s bodies depicted solely for male viewing pleasure. Cherry researched Instagram influencers, YouTube gaming sites, contemporary codes and algorithms of the media landscape. Her kaleidoscopic vision presents energised and psychedelic women who own and celebrate their highly commercial images.

Rather than exploiting or fetishising her provocative, larger than life Femmes, Cherry honours their curvaceous sensuality. From rainbow fish netted legs to abbreviated bikini tops, her brushwork mimics moire patterning and creates prismatic patterns of desire. Gaming references include a giant fan, a wire cage holding images, and “screenshots” of famous male gamers like the boxed portraits of “Fairweathercoin,” reminiscent of a teleconferencing position. Cherry presents “$25,000” as a screen, complete with a freestanding, projecting arm that thrusts the canvas into viewer vision.

The multidimensional paintings suggest a code for the viewer to crack. Layered numbers and letters are camouflaged by bold brushwork. Strong swirling patterns suggest muscle and morph to incandescent dragonfly wings.

Knowing nothing about the gaming world and only recently discovering Glitch Feminism does not prevent me from being dazzled by an artist whose work is ignited by a provocative, political and contemporary passion. 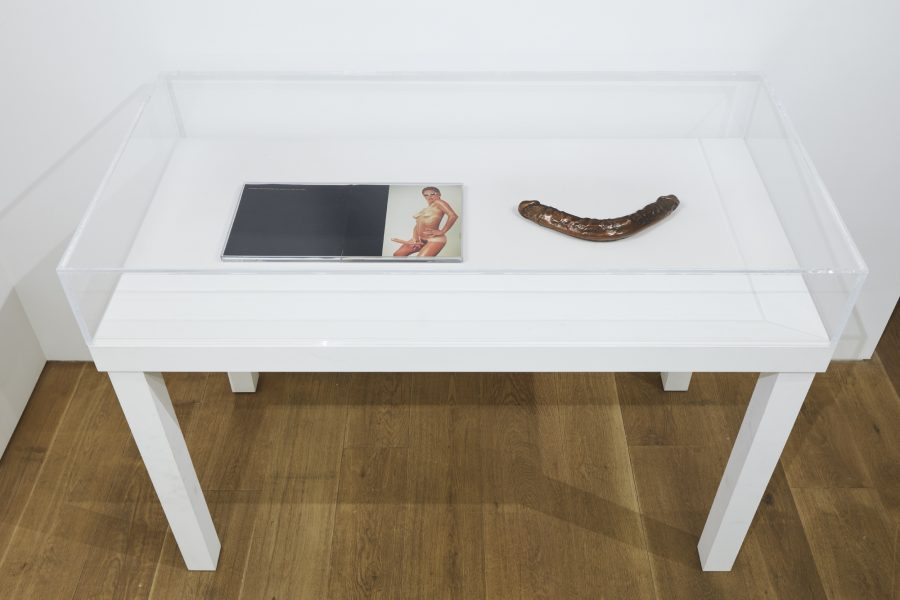 This carefully curated show of sculpture from almost four decades ago shows that the early works of Lynda Benglis are as focused and fresh as when first viewed. Using abstract forms and contemporary materials, Benglis was among the pioneering women artists of her generation who explored new female imagery.

Undulant coiled extrusions are attached to walls. Also on view is the tall “Untitled(Totem)” an eight-foot glittering mica flecked sculpture. This early skeletal and embellished piece bedazzled the concept of minimalism and remains a great predictor of the playful, sensual and seminal work that Lynda Benglis has produced for the last four decades. 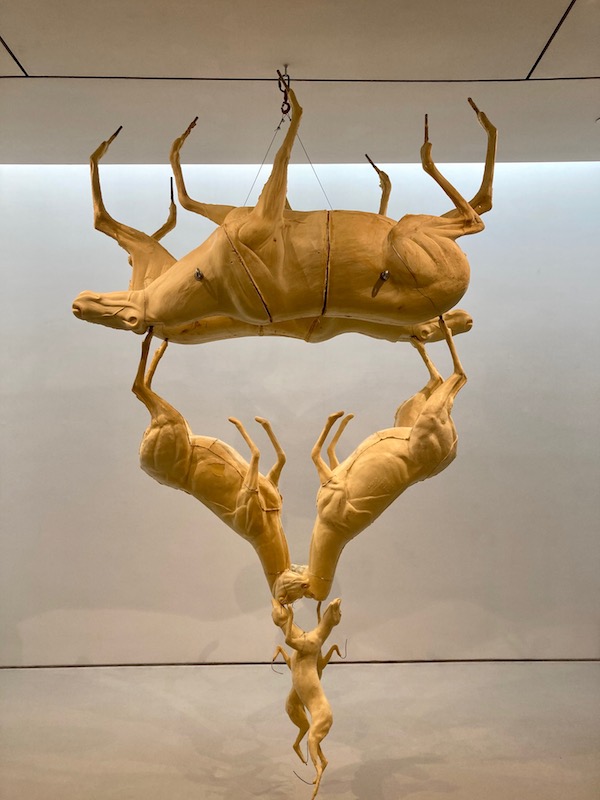 Coinciding with a major retrospective at London’s Tate Modern, Bruce Nauman continues his idiosyncratic exploration of the natural world and spatial relationships. Here, the focus is on an interactive iPad digital work, “Nature Morte” that allows the viewer to jump into and explore Nauman’s reassuringly messy New Mexico studio. Playing with the 3D projection that illuminates a gallery wall, the viewer uses an iPad to choose and focus on whatever exacting detail interests them. “Nature Morte” actually continues the artist’s long time use of his studio as the subject. Going back to 1966, the artist created a series of photos and videotape “Failing to Levitate in the Studio”. In his 2001 “Mapping the Studio 1” Nauman videotaped his cat and the mice who lived there, in the course of a night time shoot.

The other 3D video “Walking A Line” shows the barefooted artist balancing in a disjointed backwards stroll, his body bisected just enough to make it intriguingly off-kilter. Wearing 3D glasses further transports the viewer into the weirdly disjointed image of the artists struggle to continue his deliberate and upright stroll.

A monumental sculpture “Two Leaping Foxes” is a forest bestiary of woodland creatures, upside-down caribous attached to a pair of leaping whitetail deer, and ending in a dangle of foxes. Made from a polyurethane foam that taxidermists use, the upside-down animals form a chandelier that could be awaiting butchering.

This latest show allows each visitor a curated and personal experience. From mapping his studio with the latest accessible technology to portraying vulnerable and powerful animals, Nauman meditates upon life and mortality.