The work and practice of Pablo Bronstein addresses two common misconceptions. The first concerns art and is to do with the perception that the contemporary art world no longer teaches, values or rewards the traditional skills of drawing.

Bronstein’s technical skill and his graphic fluency demonstrate that, when combined with imagination and ideas, the art world continues to embrace those who use traditional drawing skills.

The second concerns religion and is to do with the extent to which traditional understandings of Hell continue to resonate with contemporary society. From at least 1853 onwards, the point at which Professor of Moral Theology at King’s College London, Frederick Denison Maurice, was dismissed from his post for arguing that the notion of an eternal hell was incompatible with belief in the infinite love of God, the Church has been divided on the issue of whether Hell is about aspects of our earthly pre-death experience or an eternal after-death experience. Bronstein’s is rightly a this-world vision of Hell.

Bronstein imagines Hell in terms of the last two centuries of supposed progress through the consumerism of the capitalist West. Imagined as a monumental city, visitors to this exhibition are guided through concert halls, casinos, botanical gardens, car factories and oil rigs. All are designed to baroque excess being overwrought and overwhelming. 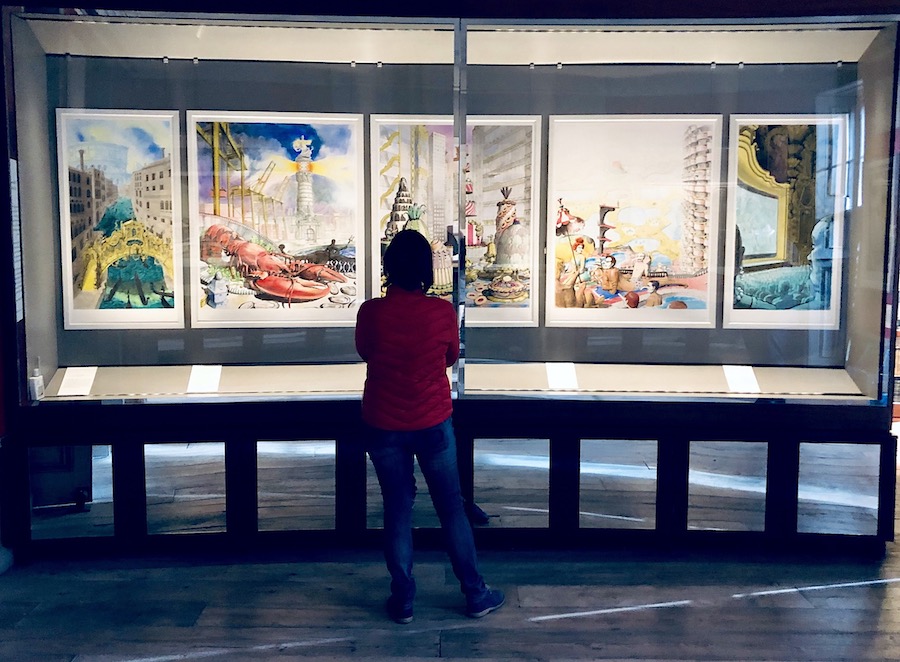 Bronstein’s Hell is a city built by those with the taste of a Donald Trump where all is shine and surface, gilt and garnish, ornamentation and ostentatiousness. Bronstein’s buildings tower over their inhabitants, diminishing their sense of self, while their ornate extravagance emphasises the poverty of those who live or work elsewhere. The architecture of Hell sees buildings as signifiers of power, wealth and privilege. To possess these things is to be in Hell and to be a purveyor of Hell.

This, the first major museum show since 2009 to focus on Bronstein’s works on paper, sees the prominent British Argentinian artist exploring themes of frustrated desire, consumption, nostalgia overproduction and environmental destruction through drawing, film, watercolour, choreography and performance. Alongside Bronstein’s cycle of a diabolical city revealing the seductive power of images themselves, a new twenty-minute film, In the Realm of the Realtor, plays with the idea of desire as conjured and frustrated by property marketing. To be frank, the least said about the film, the better, yet the watercolours themselves are sublime. 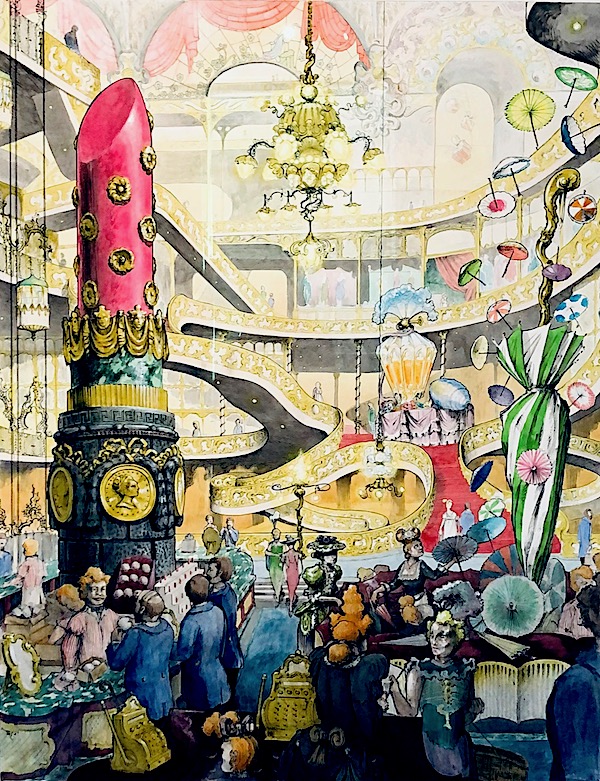 To envision his dense, theatrical compositions, Bronstein draws from a range of sources, including mannerist sculpture, commedia dell’arte, eighteenth-century interior design, the circus, early advertising posters and television. He does so in ways that echo the accumulation of ornament, fragments and borrowed images found in the Soane Museum; the eclectic style in which contemporary and historical references were blended by Sir John Soane in his collection. He has been obsessed with the Soane Museum since he was a student and has allowed the ethos and approaches of Soane to inspire his own work, which has been made in parallel to the museum rather than directly about it.

With this series, Bronstein is looking back at the world in which his own grandfather grew up and the technology that was prized at that time. He writes that the things that generated wealth and pleasure ‘are now seen as responsible for much of the ruination and misery of the contemporary world’. The past and the present, the monumental and the mundane, are combined throughout, as in The Cross, in which electricity and telecommunications feed into a high baroque foliate High Altar Cross from which white light is emitted. In this triptych, the Electricity panel and the Telecommunications panel are ‘like medieval donors, paying their respects to the high powers while simultaneously providing a service to its dissemination’. Similarly, Oil Wells is an image of towering golden machines creating an unsettling show of excess.

Bronstein describes his panoramas as ‘a reinterpretation of the 19th and 20th-century glorification of technological and economic advancement’, ‘a bombastic cityscape in which the now misplaced optimism in ‘progress’ is drawn as hyperbole’. The deep irony of his vision seen through the appearance of an early seductive advertising campaign leads in Pâtisseries and Confections to an arrangement of elaborate desserts presented on the same scale as the surrounding architecture, while helicopters disconcertingly hover nearby. In Administrative Palaces, a monumental building with rococo columns simulating natural tree trunks at their bases is seen against a background of interlacing motorways and a temple featuring figures from Michelangelo’s tomb of Ferdinando de Medici plus a representation of Lucifer himself.

Not immediately and obviously an exhibition for the period of Cop26, this is, nevertheless, one that reveals our taste for the instant, excessive, tawdry, gaudy, flashy and swanky to be, not only kitsch and trivial, but also so seductively addictive that it has gradually yet inevitably led us to the edge of an environmental emergency which we, judging from the Cop26 negotiations, continue to only partially acknowledge and address. The unaffordable cost – the hellish expense – paid for our consumerist addictions is at the heart of this exhibition. Bronstein reveals us to truly be in the heyday of Hell.