I was won over to Hastings, or rather St Leonards by the dearly beloved and now departed artist Danny Pockets. He was a musician as well as a visual artist and brought down many from the London experimental scene to the town for a day festival, Thee Sunday Sonics. It was for this many years ago that I came to perform at the Old Chemist with the St Leonards International Film Festival and made deep personal links with artists from this wild town that I love. Business and family obligations made the move long, and Covid-19 means that I haven’t moved in fully quite yet, but I feel ready now to get in deeper and so here I am at the Hastings Contemporary for the first time. 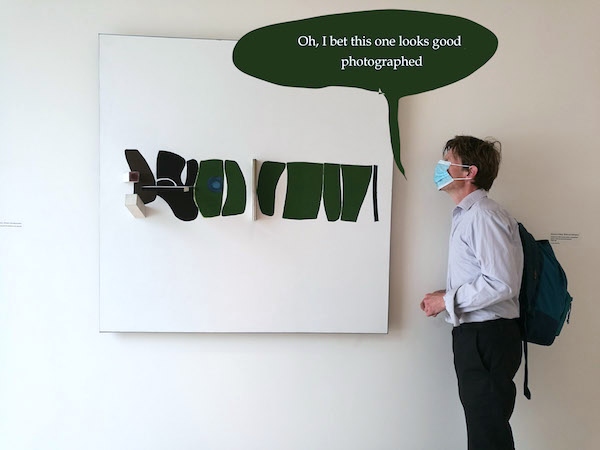 First, I want to say how much I love the building. Inside it is even better than outside. On this sunny September day, I feel connected to the beach and the sea. Being high up and looking out of the tall glass window onto the shoreline, I see people working on the fishing boats. I notice it is keeping the gallery attendant happy as well to have this vision as well as watching the few of us admiring and contemplating the works on display.

I want to begin with thoughts on the Pasmore pieces. Victor Pasmore has been a long hero of mine as I am a printmaker. Pasmore, I perceive, is on something of a renaissance of consciousness on the British art imagination. Although various buildings in the East End were named after him, this is what he was in Newham, a dry old name, meaningless to the inhabitants. Even I with my more intellectual arts education had not got much past Matisse and the impressionists at the time I first encountered him, I was a late developer with abstract art. And Pasmore is known as a pioneer of abstract art in Britain in the 1940s and 1950s.

Matt Armstrong was a much earlier adopter of abstract paths in fine art than myself, a huge young man of Kazimir Malevich and the first works he remembers of Pasmore are the 3D works. He is drawn to them and comments on how well they look here. ‘They seem made to be viewed from a distance’ he says, and we look at them from far away, letting the shadows play their role in the works.

For myself, as a printmaker, I comment on how Pasmore’s later works here are using spray inks and oil pastels to mimic the separation of the print process. I remember early experiments with inks through the beds to try and realise the beautiful roundness of Pasmore’s shapes. I soon learned that viscosity experiments, for their success, depend on knowing how inks behave on paper and that too much, too runny inks are a disaster if you are looking for control. There are none of Pasmore’s huge prints here that he did in Italy. We talk of them and wish we could see them.

Interesting to Matt and myself is the plywood bases and unusual materials on which Pasmore is working. The wood mounts, rough and ready, basic and straightforward but which frame the work well. It’s all surprisingly straightforward. There is charming drawing we both comment on. It’s cross-hatched, the sun going down over the water. It suits Hastings. The sun is drawn multiple times, sinking into the water. The simple lines, its modesty, the movement over time . . . a good choice by the curator. 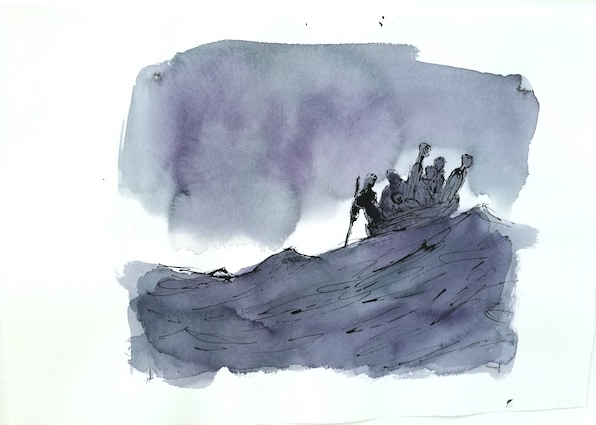 And to the Quentin Blake. Blake is the artist patron of the gallery and I’d like to thank him for his support as I have recently been doing graphic novels and feeling his support of this regional contemporary art gallery in my newly adopted town gives me a warm feeling. I have always enjoyed his illustrations for Roald Dahl and the Puffin books I read as a child. His work is distinctive, full of character and recognised for its infectious humour.

But also for his recognition of the lost look, the sad eyes, the soul of the wanderer, the migrant tossed on the waves, the trudgers over the hill. His series of work look into the visual romantic visions of humans making journeys in purple and Prussian blue watercolour, the clouds above echoing the despair and the struggle of people against the odds. The disembodied heads, imaginary sculptures resonate with the ancient great stone heads of the Easter Islands. We now know the heads were attached to full sculptures! But for years they were photographed as heads alone on the grassy hills, the strangeness of their decapitation giving a sense of absurdity that heightens and shifts our emotional response, making their vastness more vulnerable. Blake’s studies of heads on stilts are reminiscent of Dali. In the featureless landscape, they are raised on sticks, a surreal-scape that is, again, appropriate for a beach landscape, the oddness of the shore with its washed-up wood and bits and bobs, empty shells have fed much surreal art. It’s right for here at Hastings.

For me, I’m glad the gallery chose these two artists together. I came out feeling inspired and ready to do my own work. Refreshed, rather than overwhelmed. Alive rather than weary. And ready for a swim.