The rather splendid show of new figurative painting, now on view at the Whitechapel Art Gallery, boasts that it is the first event of its kind since the New Spirit in Painting exhibition that made such an impact here in London in the now long-ago 1980s.

The answer to this is ‘yes’ – and also ‘no’. The exhibition demonstrates how much the world has changed for figurative artists, and more especially for those who choose to use paint as a medium. It also exemplifies the shifts in subject matter that have taken place since then, plus the new emphasis on art created by women, and also by artists of ethnic minority origin (some of whom, of course, are also female). 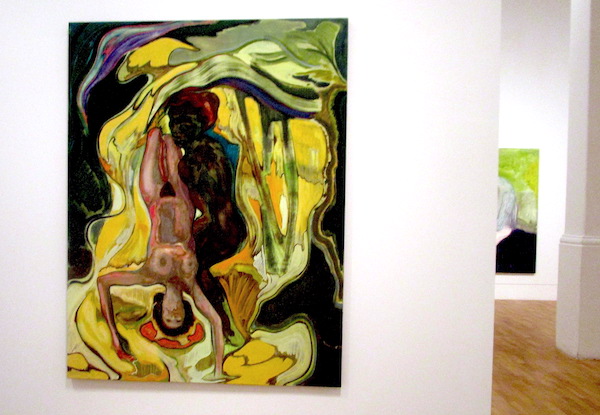 Some of this, and a bit more, is summed up by the cover-illustration chosen for the catalogue. This shows two black men kissing. Entitled Kampala Suburb, and painted in oils ‘lubugo barkcloth’, this is the work of the Kenyan artist Michael Armitage, who lives and works in London.

British-based artists are not in the majority here. Of the ten artists whose work is on display, only two live and work in Britain. The other one is Ryan Mosley, who lives in Sheffield. All but one of the others live in the United States, though some were not born there. The age range is quite extensive. The oldest is the German Daniel Richter, born in 1962, and The youngest is Tschabalala Self, born 1990. Self is undoubtedly a rising star – last year she had a solo show at the Hammer Museum in Los Angeles. Like Michael Armitage, her chosen subjects are black people.

One can’t, I think, say that Radical Figures show proclaims the appearance of a new art movement. The artists are too widely separated in age and location for that, though the majority were born in the 1980s. The preoccupations with race and gender that figure so prominently in their work are very much in tune with the kinds of contemporary art that a currently being made using other media – photography, video performance art. If one looks at the art currently being made in all media, one sees a rejection of what is purely abstract – ‘art-for-art’s-sake’ as the old term has it – in favour of art that is preoccupied with social images. Once you embark on that, images inevitably crowd in. 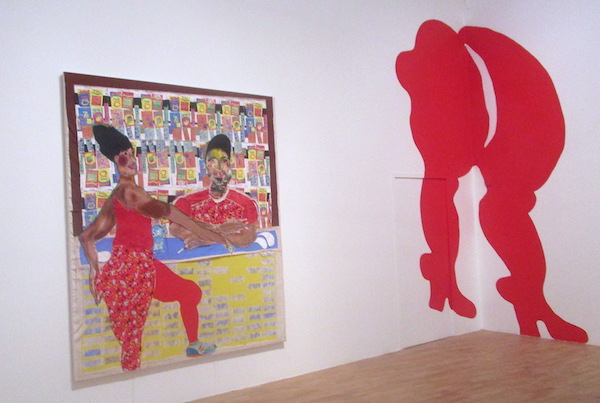 The catalogue introduction to the exhibition points out that the works on view tend, in a broad sense, to be Expressionist – that is, they are visibly related to the kind of work that was being produced in Europe just before, during, and just after World War I. During an epoch when avant-garde artists were increasingly preoccupied with politics, as expressed both through lethal violence and also through radical social change. Those elements are present here, though often in slightly adulterated form: through Expressionism modified by Surrealism. One thing which is usually evident is the desire to make a meaningful comment on society. This is present in two huge paintings by Nicole Eisenman. These are perhaps the most impressive things in the exhibition.

The problem here is what kind of permanent home will they ultimately find? They are the kind of thing that belongs in an institution, not in a private dwelling, however grand that dwelling may be. Works of this sort sometimes solidly hit the mark and become part of general public experience. Picasso’s Guernica offers a case in point, though World War II radically modified its meaning (so it happens). It was transformed from being a comment on the Spanish Civil War to being one on Fascism in general. Several grandiose 19th-century examples of the same kind of public picture now gather dust, I suspect, in forgotten storerooms.