The RA’s new exhibition The Renaissance Nude, upstairs in the Sackler Wing of Burlington House, tackles an ambitious theme – the portrayal of the nude in Western art, from c. 1400 until the 1530s. It is full of very big names, though (of necessity) not usually represented by their most significant, grandest works. Even if there happened to be an institution willing to lend, works of this type wouldn’t fit into the modest spaces available. This said it’s a fascinating, thought-provoking show.

As the exhibition proceeds, the images tend to become wilder and less attached to any idea of a classical norm – ELS

Depicting nude figures in art is generally linked to the rise in interest in Antiquity. As the Middle Ages dwindled away, art was influenced by a renewal of interest both in classical literature and also by the works that the Greeks and Roman artists of the classical epoch had left behind them. What this leaves out is the relationship between art and the Christian religion. The impulse was not only to look back to the classical past but to humanise and make more accessible the Christian legend. The show features images of Christ and of Christian martyrs. Most of the latter, though not all, were male. 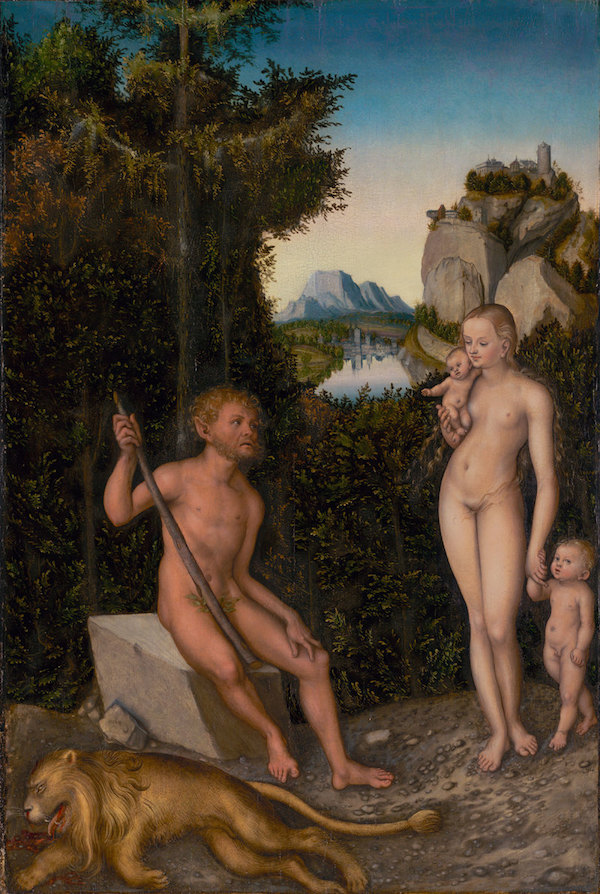 Lucas Cranach the Elder, A Faun and His Family with a Slain Lion, circa 1526. The Renaissance Nude Royal Academy

The male nude, or near-nude, was in this context often represented as abject. An excellent example of this is the painting by Jan Gossaert, seen soon after you enter the exhibition, of Christ on the Cold Stone, stripped of his clothing, waiting to be scourged.

The show offers quite a number of images of St Sebastian. In one of these, by Bronzino, the saint is a pretty, slightly quizzical adolescent looking out from the picture. You have to look for a second time to note the single arrow sticking out of his torso.

As the exhibition proceeds, the images tend to become wilder and less attached to any idea of a classical norm. One of the most striking works is an elderly nude St Jerome by Donatello, a figure carved in limewood gazing in adoration at a Crucifixion that is not present. It’s hard to see anything remotely classical in this. It’s Expressionist before the idea of Expressionism was invented.

A lot of the wilder images are prints, among them the famous Battle of Nudes by Pollaiuolo. And a lot else of what is on show are drawings, made by Renaissance masters in the privacy of their studios. Though images of female nudes are not absent – there is, for example, a fine painting of Venus by Titian – they are not, or not primarily, what the exhibition is about.

Feeling fully at ease in representing naked women was still, at the time when these works were created, a step or two in the future. In many respects, leading northern artists, such as Cranach, seem to have felt more at ease with this kind of subject than their Italian contemporaries.