I was thrilled to return to Arles in Provence, France, for Les Rencontres Photographiques after a 3-year break due to the pandemic.

Obviously, I was not the only one happy to meet old friends at the Place du Colisee, to dine on the terrace of Galoubet, to stroll through Arles’ small streets, and to attend the most sought-after prize: the Pictet party.

There was a “Baselisation” at the 53rd edition of Les Rencontres Photographiques d’Arles under the helm of Christophe Wiesner.

This year’s edition had a definite feminine tone, following the current zeitgeist in the art world.

So many familiar faces who attended the Art fair in Switzerland have now added Arles to their art calendar: the borders are blurring between photography and Contemporary Art. This year’s edition had a definite feminine tone, following the current zeitgeist in the art world.

On a sunny morning, I travelled on a cyclo to le Parc des Ateliers. In La Mecanique Generale I had my true “coup de coeur” for : A Feminist Avant-Garde. Photographs and Performances of the 1970s from the Verbund Collection Vienna.

It is an extensive touring exhibition – over 200 works by 71 female artists – well documented and researched. As Gabriele Schor, the curator, remarked, ‘Feminist art is the most powerful theoretical movement in modern art, but much remains to be discovered’.

The exhibition is divided into five themes: Women’s reduction to “wife, mother, and housewife”; their resulting feeling of “being locked-up”; the questioning of “dictates of beauty and representations of female bodies”; explorations of “female sexuality”; and debates around “female roles and identities”.

It is truly a groundbreaking exhibition which investigates the practice of artists, some of whom have been marginalised and excluded from exhibitions and art-historical debates. They all shaped the Feminist movement, such as VALIE EXPORT, Cindy Sherman, Francesca Woodman, Marta Rosler. 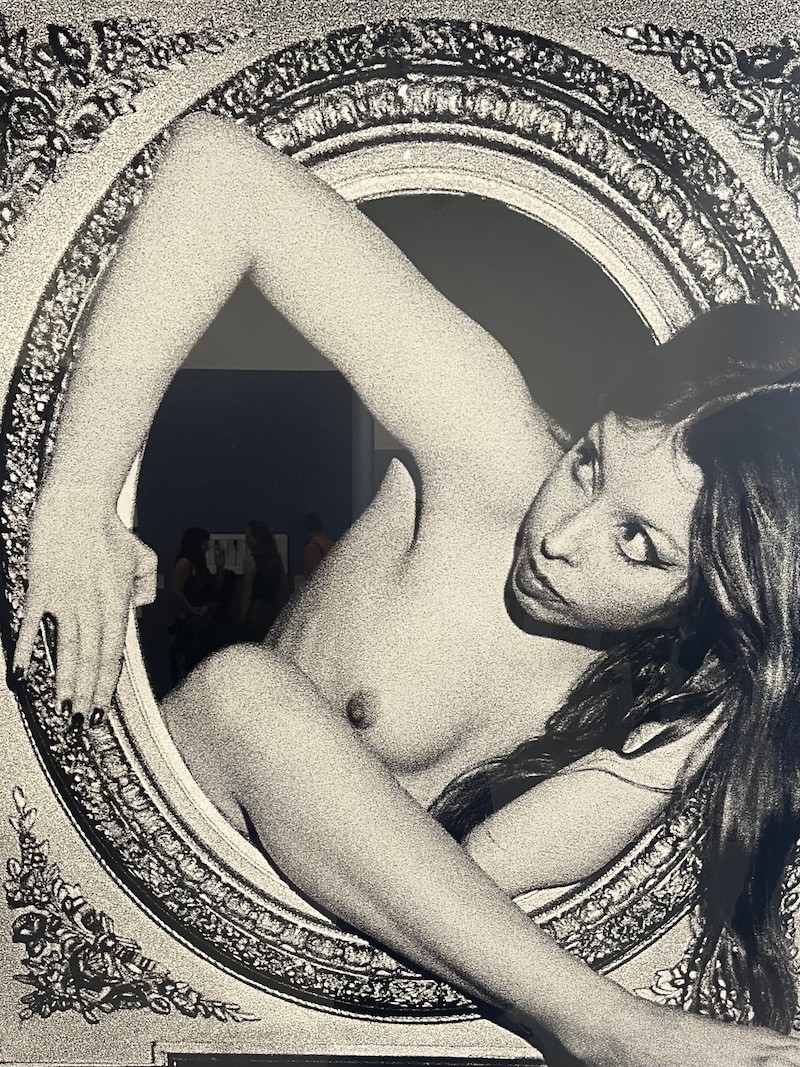 Orlan 1966 Attempting to Escape the Frame

I discovered ORLAN’s early photographs where the nineteen-year-old artist metaphorically breaks from the frames of art history, “Attempting to Escape the Frame”. I had the chance later that same day to meet Orlan in Arles’ narrow streets and to tell her how avant-gardiste she has been. I’m currently reading her autobiography and wish to review soon the major Museum retrospective she deserves.

Some images have a sad beauty and simplicity, like the hands of women behind bars and metal doors by the Portuguese artist Helena Almeida. Others are disturbing, like Annegret Soltau’s “self”, where the artist wraps her face in a thin thread. In the last image, she can’t talk and see. 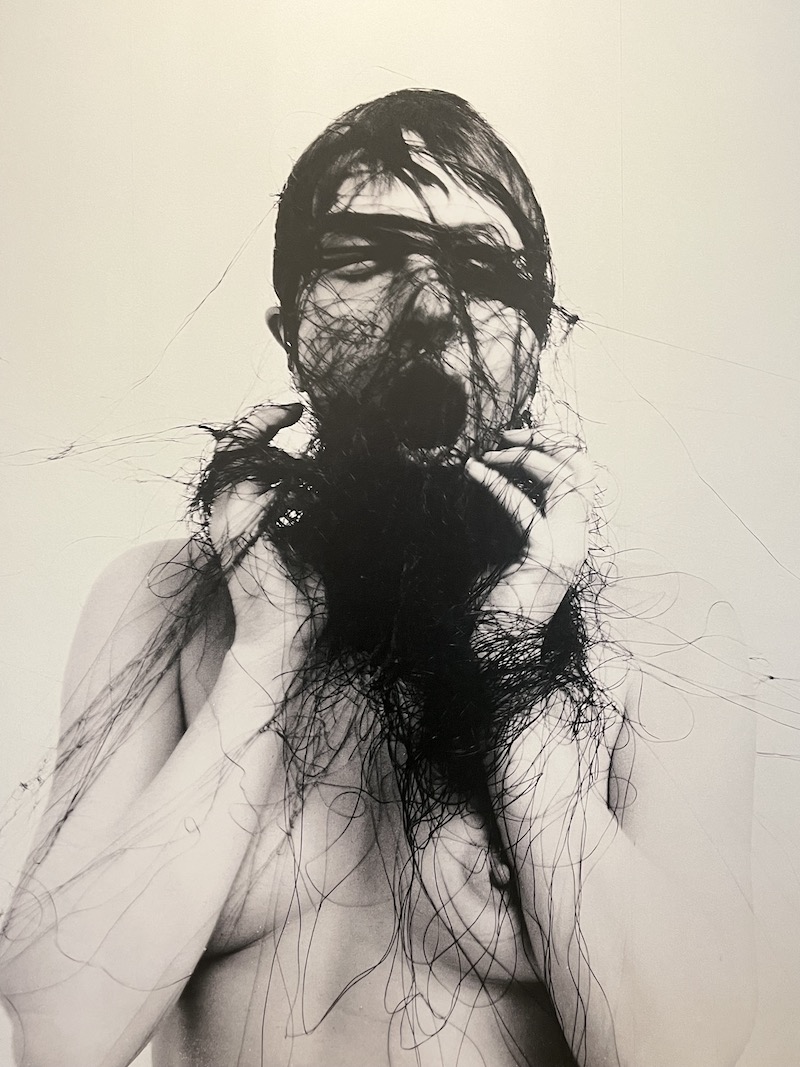 I could not help thinking how timely this exhibition is with the latest Supreme court ruling on abortion in the US and the current erosion of women’s rights. It reminds us that patriarchal oppression is still vivid and alive.

Later that afternoon, I ventured to the Luma Foundation, which is presenting an extensive retrospective of the Ghanaian photographer James Barnor born in 1929: 40 years of photography 1947- 1987 (between London and Accra) from an archive of over 30,000 negatives. Together with the curator Matthieu Humery, Barnor chose 100 photographs, each with its own narrative. Together they tell the story of colonial times, independence, and swinging London.

On the outskirts of the historical centre, at Croisiere, the young French photographer Lea Habourdin is showing a poetic exhibition on primary forests. She spent two years researching these protected areas. She makes prints called anthotypes that are not resistant to daylight and will, like the primary forest, disappear one day. She extracts photosensitive chlorophyll from plants and uses plant pigments made by an artisan. Her chromatic palette of bright yellow birch leaves to pale pink poppy petals creates a fairy tale type of forest.

Unusual and convenient for those who need to do some shopping, the Monoprix supermarket is hosting, on the 1st floor, a very good exhibition dedicated to clouds: Sounds of the Sky. I particularly enjoyed the works of Shinseungback Kimyonghun from Korea, Almut Linde from Germany and the NASA photographs. It is inspired by Alfred Stieglitz’s body of work from 1922. Far from the emotional and romantic photographs of Stieglitz, Arles’ exhibition reads the sky through the technological lens of digitalisation – the photographs of the sky come from smartphones, surveillance cameras, satellites and are saved on the cloud operated by artificial intelligence.

In the stunning Commanderie Sainte-Luce I attended the presentation of the first edition of the artistic mentorship programme of the Pernod Ricard group: Two artists, a mentor Sandra Rocha and a mentee Perrine Geliot shared their vision of Chiapas, Mexico, a region that I happened to visit last February. They had travelled to Palenque, and through photography and video, they did a meditative yet critical parallel between Mayan civilisation and our contemporary Anthropocene society.

After a delicious dinner in one of the small squares with curators from Iran and collectors from Thailand and the US, I packed my suitcase knowing I will definitely be back next year.

Les Rencontres Photographiques d’Arles is on until 25 September 2022.