An online show called Revisiting the Decameron, curated by Laura Gascoigne, has recently gone up on the Flowers Gallery web-site. It runs until 9th of August.

It contains new work by a number of contemporary artists. Gascoigne notes that this series of stories by Boccaccio offers uncanny echoes of our current situation, situated as we are in the midst of the social crisis caused by the coronavirus. Boccaccio’s stories were prompted by an outbreak of plague in Florence in the year 1348. People “died without a single witness” and few were “the bodies accompanied to church by more than ten or twelve neighbours”. Boccaccio imagines the stories he offers as being told by a group of self-isolating young people, holed up in an estate just outside Florence. 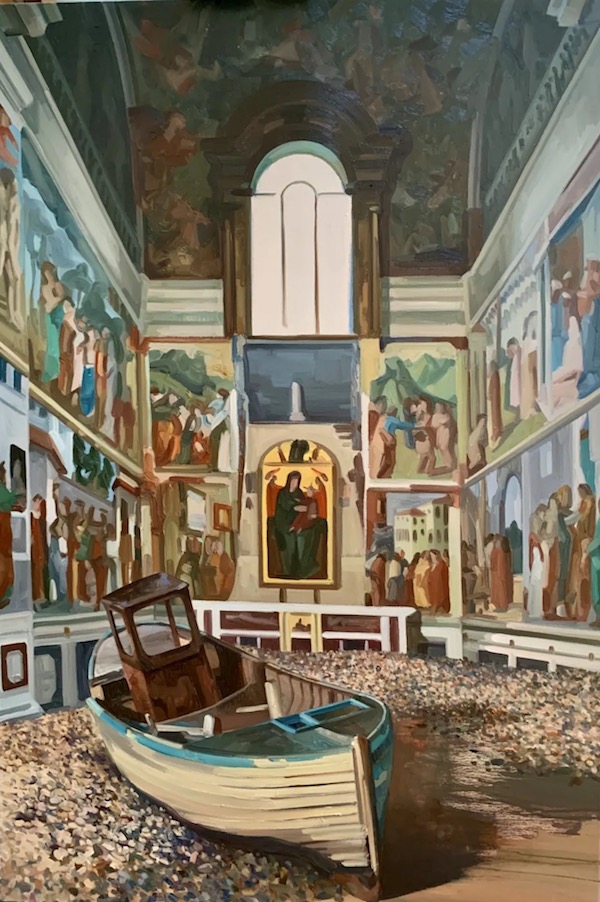 Gascoigne offers another parallel in addition, comparing Boccaccio’s narratives to Netflix. Quite a large number of different artists are involved in this enterprise: Stephen Chambers, Ken Currie, Marcelle Hanselaar, Tai Shan Scheirenberg, Shani Rhys James… They acquit themselves pretty well. There’s plenty to look at here. And of course, you don’t have to leave home, or even leave London, to see what they offer. If you happen to live in Timbuctoo and are interested, the exhibitions doors are open to you, day and night.

One of the things that the enterprise at Flowers reminds me of – not mentioned by Gascoigne – is aspects of 19th-century literature – the serialised novels of Dickens devoured in stages by their original generation of readers, I am also reminded of the fact that there are other art narratives currently available on the web – for instance, Joe Machine’s illustrations to Dante’s Inferno, available on the London Magazine web-site. Or, if you want to go much further back in time, Titian’s stunning responses to Ovid, now once again available to the public at London’s National Gallery. These, too, can also be seen on the web.

All of these are reminders, not only of the public’s thirst for interesting stories – “sit down and tell me, daddy” – but of the increasing barrenness of insistently autobiographical contemporary art. These series on the Flowers Gallery site open up the world to the person who views them, rather than making it seem to close in. A good story shared opens windows between artist and audience. The repeated assertion that “L’art c’est moi – just that, and nothing else” becomes increasingly claustrophobia-producing. Confronted with it, you feel like saying: “Yes, dear, you’ve told me this a hundred times before. Just this once, could we please talk about something different? Even Rembrandt and Van Gogh didn’t go on about themselves to quite this extent.”

Of course, the irony is that a series of images, made by an artist in response to a classic text or series of texts, will always, if the artist concerned has any talent, resonate with his or her personality. You are being allowed to eavesdrop, paradoxically through your eyes, not your ears, on a very personal exchange: “What exactly did Mr Boccaccio have to say to Shani? – Well, you’re the third party present. Work it out for yourself”.

Revisiting the Decameron, curated by Laura Gascoigne, has recently gone up on the Flowers Gallery website