The Robert Rauschenberg show Spreads: 1975-83 just opened at Thaddaeus Ropac here in London comes complete with a museum-worthy hardcover catalogue, and is indeed, though this is a commercial space, the kind of exhibition that any museum specialising in contemporary art might be proud to put on. The series of works it presents date from the period when the artist had removed himself from the turmoil of the New York art world to live in comparative solitude on Captiva Island off the coast of Florida. It also dates from the time when the artist had his first big retrospective exhibition.

These are prophetic works, forerunners of much that is being made by ambitious would-be avant-gardists of the present moment – ELS

And, as it happens, it also comes from a time when a number of leading artists in the American avant-garde, often artists younger than Rauschenberg himself, were becoming more and more enamoured with the idea of Conceptual Art. 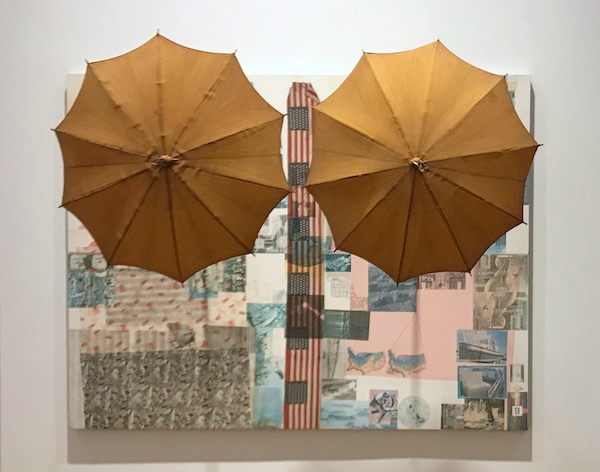 This attraction was something that Rauschenberg felt, but the Spreads series shows him swerving away from it. Elisa Schaar, in an excellent catalogue introduction, quotes a review of the first showing of items in the Spreads series, written in 1977 by the critic William Zimmer for Arts Magazine: “In recent years the artist has left everything out, […] Perhaps stimulated by his retrospectives and the heady, full painting of his trailblazing days, Rauschenberg has put everything in again.”

The works on view indeed tend to offer a wide variety of included objects. Rumour (Spread), dated 1981, features a chequered dishcloth, slightly crumpled, plus collaged images, plus a bucket suspended on a chain and a glowing electric light bulb, neatly plugged into a socket near the bottom of the composition, its cord trailing on the floor. Another work has a pair of open parasols. And yet another offers a crumpled parachute.

As one realises, looking at them now, almost four decades after their creation, that these are prophetic works, forerunners of much that is being made by ambitious would-be avant-gardists of the present moment. Things haven’t moved on. Or, if they have, they haven’t improved on what was there already.

Looking at these Rauschenberg combines – a title that the artist used for another series, but still this seems like the best label for them – I was struck most of all by their dreamlike quality. They are often very large but seem physically light. The parasols seem like strayed sisters to the one carried by Mary Poppins in various productions of The King and I. One looks for a button that, as a final touch, will make the whole combine burst into song.

In fact – let me confess it – my basic reaction to these Spreads was to murmur to myself “Where did we all go wrong?”

The catalogue reproduces some of Rauschenberg’s scribbled notes, a first draft made c. 1981 to elucidate some of his works on show at the Tate.

“I’ve never been particularly concerned,” he states, “about, material, equipment or technique. My restlessness insists that my work is simply the result of where I’ve been, and I always use what’s there.” He adds, “The works [sic] is my wake.”

To quote from The King and I: “Shall we dance? On a bright cloud of music shall we fly?” Or again: “Getting to know you – getting to know all about you…” These are light-hearted works with serious meanings. Meanings that can only be conveyed in images, not in words.