Rose Wylie has become one of the leading British contemporary artists of her generation. In the last decade, her work has come to the forefront both domestically and internationally, with a practice that is youthful, playful and fresh. At 86 she still retains an unspoilt, child-like innocence purveying relevant and timely subject matter in her witty, loose style. Some of her paintings are intensely personal, others universal.

The show works well in the understated splendour of the tropical haven, Windsor, Vero Beach. The welcoming second-floor gallery provides ample natural lighting along with an intimate human scale. Rose Wylie: Let it Settle is the third and final exhibition at Windsor presented in collaboration with the Royal Academy of Arts, as part of a three-year curatorial partnership launched in 2018. This is the first exhibition in the programme by a woman artist. Other RA artists featured in the past include the potter Grayson Perry, and the British artist and teacher Sir Michael Craig-Martin. 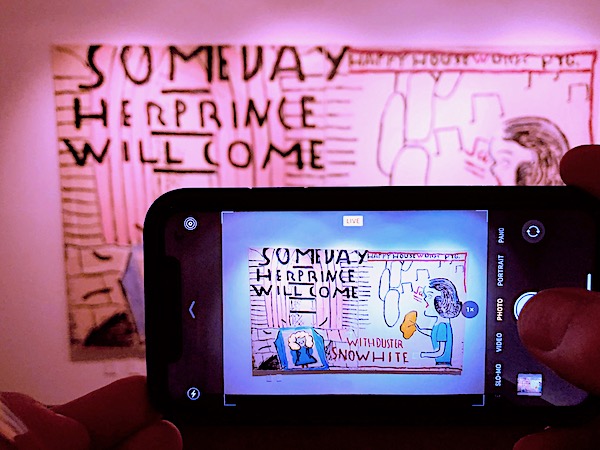 In 2014 Wylie won the prestigious John Moores Painting Prize and was elected as an RA, winning the Royal Academy of Arts’ Charles Wollaston Award in 2015. Her talent and sophisticated use of colourful compositions are partially dictated by the size limits of her cosy studio located in her Kentish home. Many of her more significant works are executed in panels and later assembled into a single work.

Born in 1934, Wylie works from drawings that first appear naive. The comic-strip-like paintings/drawings remain separate from obvious styles and art movements, not to say she fits into the ‘Outsider Art Movement’ either, as the work pays a grain of homage to early works by Warhol and Lichtenstein as well as the 80s artist Jean Michel Basquiat. Subjectively, Wylie draws inspiration from all areas of Pop Culture, including literature, film, fashion photography, mythology, news images, sports, and the people she meets in her everyday life. 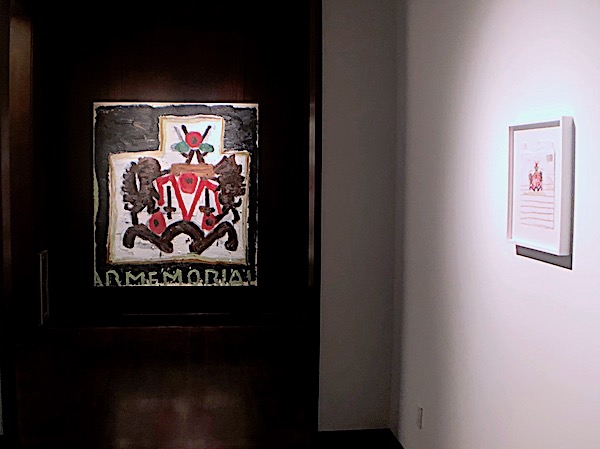 This latest exhibition derives inspiration from Disney’s Snow White and the Seven Dwarfs, a film that Rose was obsessed with as a child. Castles, heraldic war memorials along with the Queen and Prince Philip are depicted in this fanciful series. In one painting, Snow White is illustrated holding a duster cloth; there are several references to housework and objects associated with cleaning. The text reads, ‘One Day My Prince Will Come’. Wylie is possibly referencing the marriage of the Duke and Duchess of Cambridge as the word Will stands out from the other text. Rose has undeniable Feminist views, addressing the myth of marriage as rescue, she suggests that women should be thinking about what one could be doing for oneself, and not dreaming of what a ‘bloke’ might do for you.

Gallery founder, Hilary Weston has long admired the “rebellious energy” of Rose Wylie’s practice. She told Artlyst, “The scale and narrative of the work immediately moved me when I saw her paintings. I loved her attitude and that she wanted to be known for her art, not her age, and that she came alive after her children had flown the nest.”

The show has been curated by Rodolphe von Hofmannsthal of David Zwirner and Jari-Juhani Lager, her representative for many years. If you are lucky enough to be in the area, this is one exhibition you must not miss!