Two hundred and fifty-two years ago, a group of artists made it their mission to hold an annual exhibition to showcase the work of practising artists and architects. The Royal Academy Summer Show has an unbroken record. Still, this year, due to the pandemic, it’s being held in the winter rather than the summer – another sign, along with face masks and social distancing that ‘the times are out of joint’. What could be more discombobulating than having to line up in the courtyard of Burlington House with your hand sanitiser for your timed slot? But, as the press office likes to say, summer at the Royal Academy is a state of mind, not a time of year. But, for sure, ‘fings ain’t what they used to be’.

Installation by Isaac Julien, Lessons of the Hour, London -1983 – Who killed Colin Roach?

Burlington House was built in 1664 as a private mansion for Sir John Denham, a wealthy lawyer, poet and architect, in recognition for his loyalty to the King during the English Civil War and has, since its inception, been right at the heart of the British establishment. But this year there’s something different afoot. The change of atmosphere is palpable when you walk into the first gallery. On the right is a grainy black and white photographic installation by Isaac Julien, Lessons of the Hour, London -1983 – Who killed Colin Roach? The juxtaposed photos show the black community, overseen by bobbies in helmets, demonstrating against his death. This piece of social history – Roche was shot outside Stoke Newington police station in ‘83 – has been brought centre-stage into this bastion of white privilege.. The whole room is full of powerful black imagery. Yinka Shonibare’s little girl dressed in Dutch wax-printed cotton of African design with a globe for a head, carrying an umbrella takes centre stage, and there is some strong work by Sonia Boyce. Finally, it appears that the establishment is not only embracing the Black Lives Matter movement but understanding just how much artists of colour contribute to the cultural vitality of this island. 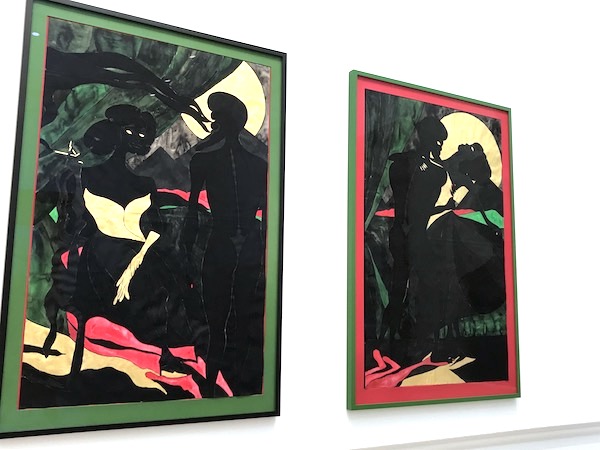 In the next room, there’s a wonderfully energetic triptych, Cha Cha Cha by Chris Ofili, which contrasts with the stern minimalism of American Tapestry made from decommissioned fire hose and wood by Theaster Gates. And in the centre of the room Sacrum Heart by Wagechi Mutu, presents two figures – half mannequin/half spirit women – made from soil, charcoal, coconut and exotic woods. Elsewhere, Frida Orupabo’s collage is a potent image of a young black woman lactating into a cup. She’s covered with a white piece of paper. Poking out of the other end is the head of a white man. It’s a powerful metaphor for the rape of a continent by the west.

There’s a quietness about much of this year’s exhibition

– no gaudy pink walls á la Grayson – but on the whole, you might be forgiven for not knowing there was a pandemic, the greatest calamity to hit the world since the last world war, for these dystopian times are not much reflected in the art, despite Brian Eno’s stark lightbox CDC WARNS OF ‘AGGRESSIVE’ PEOPLE SEARCHING FOR FOOD DURING SHUTDOWNS in the Small Weston Room, once the home of amateur cat paintings. Richard Deacon’s sculptural gallery is, mercifully, free of bombast. The work ranges from Neil Jeffries’s playful painted aluminium version of John Keats Reading to the spare, minimalist painting/sculptures of John Carter, and the smallest work in the whole exhibition, Paul Tecklenberg’s rectangular bar of soap with its rosette of iron filings, entitled Magnet North. 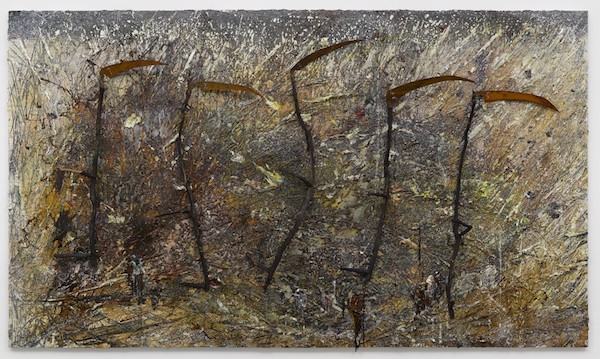 There is also some strong painting. Anselm Kiefer’s heroic canvas of scumbled paint that looks like a ploughed field with a row of archaic hand-scythes laid out across the surface is matched by Hughie O’ Donoghue’s leviathan of a ship rising, rusty and whale-like, out of the tarpaulin on which it has been executed, and Tony Bevan’s powerful ox-blood acrylics and charcoal on paper. It’s also exciting to see older RAs such as Basil Beattie, taking new directions with the introduction of vigorous colour. And then, there are the staple favourites. Eileen Cooper’s prints have more dots on them than you can count, demonstrating her combination of visual acuity and accessibility. However, there are still too many mediocre holiday daubs among the gems (as there are every year). It would have been fitting if the lead curators, Jane and Louise Wilson had dared a bit more and taken a leaf out of Gabriel Garcia Márquez famous novel, Love in the Time of Cholera, to produce an audacious visual equivalent: Art in the Time of COVID.

Sue Hubbard is an award-winning poet, novelist and freelance critic. Her latest novel Rainsongs is published by Duckworth. www.suehubbard.com

Read More About the Royal Academy