In a stormy wind, the choppy waves of the Stade Hastings felt dangerous. No fishing boats could be seen out today on the lively sea, although the working beach was active with a few tidying up and taking care of things on land.

Staring out of the window was a strange climactic installation for the art goer fresh from regarding paintings and history in this curated exhibition focusing on the art of the shipwreck and the sea goer. The stress of the experience at sea focused the mind into a place where the final exhibit had become the living boatyard of the largest beach-launched fishing fleet in Europe, viewed with privilege from the balcony of the Hastings Contemporary. It was the right weather to tie the two stories together, the painted (the exhibition is predominantly painting) and real-life below our glassy feet.

My own experience of this themed show was heightened by the presence of fellow artist Matt Armstrong, whose great-grandfather had lost his life in the Cullercoats lifeboat disaster of 1939. He had been pulled from the water by his own son, Matt’s grandfather, who had lived to tell him the tale. The Armstrong family of fisherwomen and men from the North East coast of the UK had, Matt said, not been able to swim, yet the men had still bravely volunteered for lifeboat duty, after all, they went out fishing in boats on the sea most days. On that fateful day in Tynemouth, a freak slapback wave had knocked over the boat, and ten of the crew aboard drowned, a tragic disaster for a small community and one which has repercussions through the generations, leaving a heritage of fear as well as respect and love of the sea. 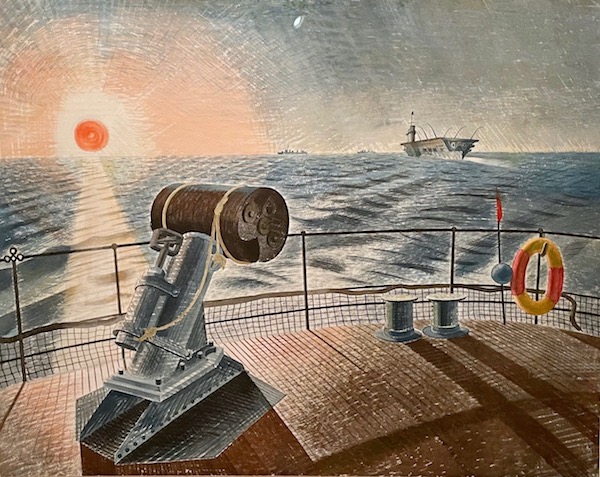 The show has been curated by James Russell reflecting on the perils and pleasures of the sea, but it is the perils that are by far at the heart of the exhibition. War at sea is a mini-theme. There are some borrowings from the IWM, and the infamous dazzle ships are represented. Richard Eurich’s poster-chosen painting of ‘Survivors from a Torpedoed Ship’ (1942) draws the viewer into a human tragedy as surely as a well-acted drama. Russell’s accompanying card tells us that the man in the middle saved his two companions but never made it out alive himself.

Another work that takes pride of place for the contemplative viewer is Norman Wilkinson’s ‘The Sole Survivor’ also from the 1940s. A man stands on a raft. He is the sole survivor. He stares into the distance. What does he think as he contemplates his future? How will he survive? There is a convenient bench to view this work, orphaned on a wall in splendid isolation, which encourages meditation and contemplation on the work. In a fascinating piece of biography which ties otherwise disconnected parts of the exhibition together, Norman Wilkinson was the inventor of the dazzle camouflage, the strange optical effect in which ships were painted in apparently random geometric designs so that they slipped from view when seen on the horizon allowing greater stealth in marine operations.

A personal favourite of mine were the three large paintings by Peter de Francia, Emigrants (1964-6). Created when visiting Algeria, men passing the time together on the deck of the ship. The movement of air onboard the deck, the conviviality: the scene is represented vividly in these rather modernist paintings. I found they satisfied some of what I might look for in a painting with their geometric design, the angles, colours and sense of immediacy. I want to feel I’m there with the artist or have a sense of the moment through his eye. I felt I was observing the men on deck with de Francia. It also was a pleasure to see the happiness of the scene. The men seemed relaxed, at ease and there was, in this case, a sense of the enjoyment of being onboard a boat together: the camaraderie that can be there for passengers. Although this was a painting of emigration, it was not in a mood of sad, contemplative longing. Still, it depicted quiet determination, looking forward, I supposed, to jobs, making money, and having a sense of comradeship together abroad. Perhaps they had left together, and they would arrive together and live near each other in their new choice of city, so although they had left home, they would keep their friendship. This, of course, was a very speculative assumption made by myself from de Francia’s painting, but that is what I love to find in figurative work, and this picture of people on the move is more seductive to me than many a studio painting of a reclining nude.

James Russell also wonders out loud, drawing us into his own reflections on the work he has chosen. One small etching of a woman disembarking from a ship with her baby after a long voyage brilliantly represents the forest of masts in port. A man stretches out his arm to assist her down the steps. But, he wonders, is his assistance welcome? The etching is by James Tissot, a French painter of high society in Paris before moving to England in 1871, becoming known for his paintings and drawings of women in London society from his studio in St John’s Wood.

Tissot’s work highlights the absence of women from the exhibition. There are few women depicted here. This is a man’s world, it seems. It reflects the times depicted here; the fifty works are predominantly British and from 1820 to the present day. The works by significant women artists that redress the balance, work by Maggie Hambling and Cecily Brown do not focus on the female experience at sea. The women are engulfed by the rolling waves and submerged into the watery deep, whereas the men, battered and broken, cling onto bits of wood, overturned boats and wobble on gusty decks, balancing their way like cats, surviving against the salty odds.

Finally, the show is worth seeing for some choice watercolours and designs by Eric Ravilious. As an enthusiastic student of art from the USSR, I see the modernist connection with Ravilious and the output of experimental art created in the early Soviet Union, particularly for the purpose of education, and I think of the work of artists such as Olga Rozenova and Vera Ermolaeva. Ravilious’s illustrations recall their output to mind and this influence on twentieth-century art, leading me to contemplate yet again how important this legacy was for the development of a new approach internationally. And the Ravilious designs still shine with light and form, the attention to texture and delicacy of line breathing life and excitement into these designs of men at work, the naval vessels and the effects of light on the sea.