Sawdust and Sequins – Royal West of England Academy, RWA Bristol: Set in the spacious galleries at the RWA in Bristol this group show was designed to celebrate the 250th Anniversary of the birth of the travelling circus in Britain; the exhibition also covers a wide time-frame regarding the dates of the works exhibited. The works here range from the early 1920’s with such artists as Duncan Grant, Circus (1923) and William Frederick Elwell, Corner of the Horse Tent (c.1923), to several that were commissioned for this exhibition, where the smell of barely-dry paint is palpable, these include Clown (2018) by Susie Hamilton, and Capturing the Moon (2018) by P J Crook. Regardless of the fact that almost a century separates these works and that stylistically they are quite divergent, the viewer could well be observing different views of the same circus company performing on the same day, so little change has there been over the years to those circus archetypes, such as the clowns (most predominantly in this exhibition), the acrobats, the jugglers, the trapeze artists and equestrian performers, that they have become virtually timeless. Given this phenomenon, the divergence of stylistic approaches from the artists shown here is brought into sharp relief, albeit ameliorated by the fact theirs are all, in various degrees, figurative works.

We can be confused by clowns in that they are, by turns, oafish, capricious, sinister, hilariously funny, pathetic and aggressive

As I move around this exhibition I am reminded of that Jazz standard, Send in the Clowns, performed variously, over the years by Frank Sinatra, Sarah Vaughan and Judi Dench. Those clowns are certainly here in force, foremost in many of these works, demonstrating, perhaps, the powerful emotive impact that they have on audiences through their rowdy performances. We can be confused by clowns in that they are, by turns, oafish, capricious, sinister, hilariously funny, pathetic and aggressive. We are never quite sure how to respond to their cajoling, mimicking, scorning, posturing or mocking. The boundary between fun and cruelty that they navigate during their act is wafer-thin, tenuous, wringing a marked degree of the enigmatic from their performances. 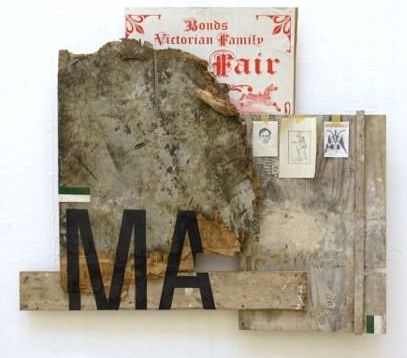 There’s no fun at all to be gleaned from the clown in Susie Hamilton’s eponymous painting. The dark silhouette of this clown is nothing less than sinister, a black figure cast against the bright spotlights of the circus ring, any hint of his demeanour totally obscured as he plies his ancient trade. Shades of the sinister and dark happenings are also abroad in Zavier Ellis’s construction, Black Magic (2011), instead of a painted clown, however, are three diminutive pencil sketches, one of Satan himself in the form of a satyr, along with a skeleton performing the danse macabre on the Tarot card ‘Death’, and a portrait of Alistair Crowley the arch-magus, all superimposed over old ‘objet trouves’ circus billboards. Here Ellis seems to be saying that behind and beneath all the fun of the circus lurks something occult, something heinous, obscured by the bright lights, the dazzling glitz and the jangling music. There is spiritual help at hand, however, and a certain amount of light relief, just around the corner in the adjoining gallery, in the shape of the Reverend Roly Bain, clown, walking a slack rope attached to a replica of the Holy Cross, in the painting Rev. Roly Bain Clown (1992). David Cobley’s image of this man-of-the-cloth turned clown is startlingly lifelike and vibrant with the vivid reds of his baggy trousers and the structure of the cross, leaping out at the viewer from a velvety black, shading to ochre, background. This larger than life character wearing a clerical dog-collar only serves to amplify the preternatural enigma of the clown.

Leaving the dominant clown theme behind, the viewer comes upon two large oil paintings by Eileen Cooper, one of which depicts an acrobat – whose performative skills have an even longer history than clowns, harking back to Ancient Greece or even earlier. (Photo top Left) The pictorial dynamics of this painting bring out all the gyratory energy of the performer. Spinning around a centre of gravity in the middle of the picture plane, her arms and legs are splayed creating the driving force of her hectic motion. 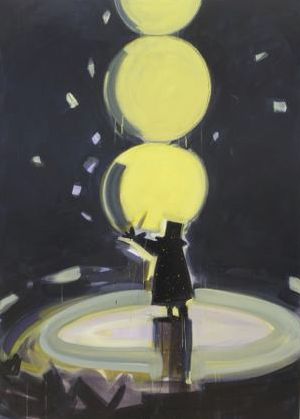 If you undertake an anti-clockwise circuit of the gallery, the last painting you come to before exiting takes account of all the skills of the circus in one fell swoop. P.J. Crooks Capturing the Moon is a pictorial cornucopia of action, whereby the compressed picture plane has all the performers in hugger-mugger action in the same space, visually it has the character of a sculptural bas-relief, highly coloured and intricately detailed, one feels that one could touch an undulating surface if you ran your fingers across the surface of the painting and, Howard Hodgkin style but here redoubtably figurative, the curved frame of the work has become a part of the visual feast, the images spilling over from the crowded picture-plane. Meanwhile, high above all the tumult of circus action, hangs Beth Carter’s sculpture, Pillowhead (2010) a colourless, lifeless, flaccid cloth mannequin, slumped backwards barely hanging on to a static trapeze, badly in need of Viagra or perhaps an adrenaline shot, burned out rather than chilled out, pathos oozing out of every stitch-hole.

This whistle-stop tour of a varied and colourful exhibition barely scratches the surface, there is much more to see, although, as an afterthought, my only criticism might be the lack of a sound element in the show that would have added extra interest, dynamic and texture, after all circuses are as much about sound, the band, the whoops and shouts of the performers, the laughter and applause of the audience, as the visual extravaganza.