James Payne has been to Paris to see Christo’s wrapping of L’Arc de Triomphe.

Napoléon’s monument to himself has been turned into a memento mori for our times, and Le petit caporal would not have approved. It takes a lot to amaze the famously blasé Parisians, but the artists Christo and Jeanne-Claude who have wrapped the arch have managed it. On my recent trip to Paris specifically to see this, I spoke to a well-dressed French woman in front of the wrapped arch and asked her what she thought. She told me: “I have lived in Paris my whole life, and I pass the Champs-Élysées most days. I never even notice the Arc de Triomphe. But now, I see it”.

Not a penny of public money has been spent, and Christo’s projects are always self-funded 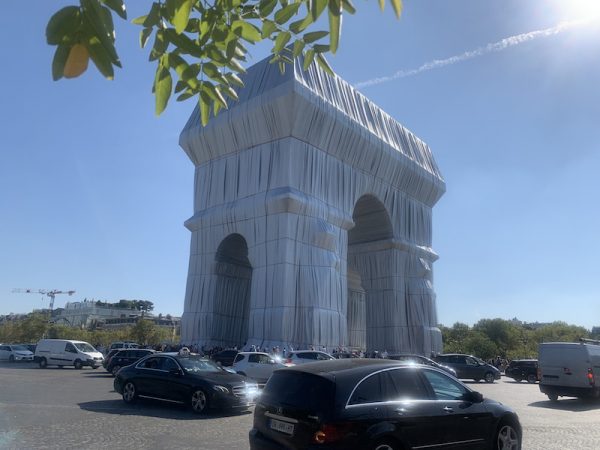 The art critic David Bourdon described Christo’s wrappings as: “a revelation through concealment.” This is what Christo and Jeanne-Claude do; they make us look with new eyes at a monument so familiar, so clichéd, so public. Make us re-assess and re-evaluate our thoughts about something we think we know so well.

Napoléon died long before his triumphal arch could be finished, and in a strange twist of fate, Christo and Jeanne-Claude were both dead before they could wrap the arch that he commissioned following his victory at the Battle of Austerlitz in 1806.

This is a project that (like the arch itself) was a long time coming. Christo and Jeanne-Claude had first imagined ‘L’Arc de Triomphe, Wrapped’ over 60 years ago. After fleeing communist Bulgaria, Christo rented a cheap room nearby and dreamed of this project, but it was not until 2017 – after the death of Jeanne-Claude – that Christo fully developed the design.

Christo, who wrapped the Reichstag in Berlin, sadly died last year but left minutely detailed drawings and directions for how he wanted the wrapped arch to look. His nephew oversaw the project.

Delayed for a year because of Covid (and two nesting falcons!), it is an operation that is as much a feat of engineering as it is a work of art. It took four years of planning, 25,000 square metres of polypropylene fabric, 3,000 metres of rope, and a team of 1,200 (including dozens of abseilers) to wrap the Arc de Triomphe. And it will only last two weeks. 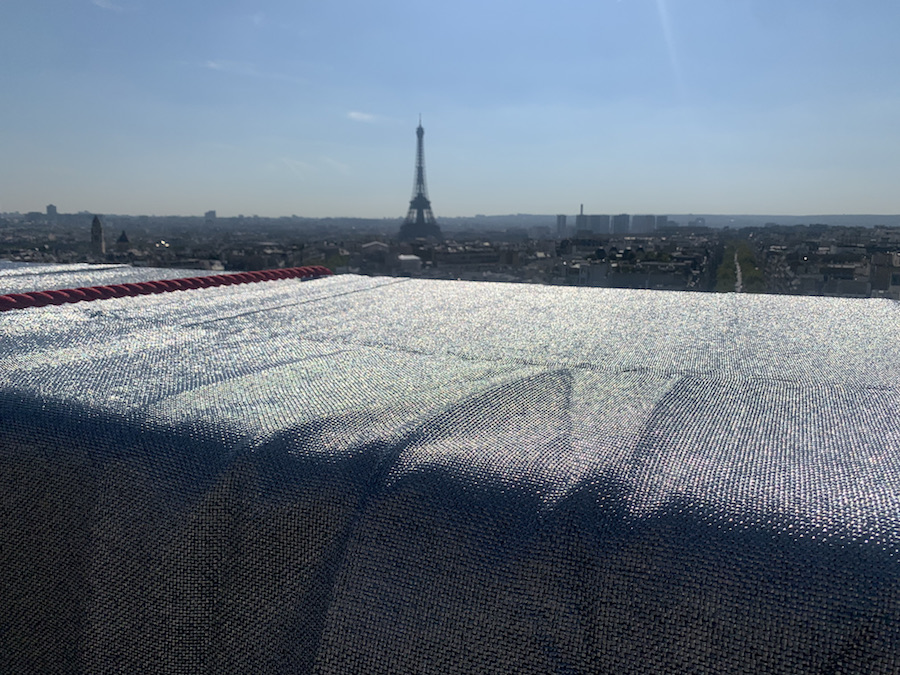 It is an artwork designed to disappear progressively. All the material is recyclable, and even the silver paint that covers the material was designed to wear away over the course of the installation.

It has faced criticism as it cost over $16 million to install. I resent this resentment!

Not a penny of public money has been spent, and Christo’s projects are always self-funded through the sale of their preparatory sketches and collages, along with scale models.

Not only that, but in a city where you pay to get into all the museums, the arch is free to enter, which Christo insisted on. Christo wanted people to get close to it and to touch it. 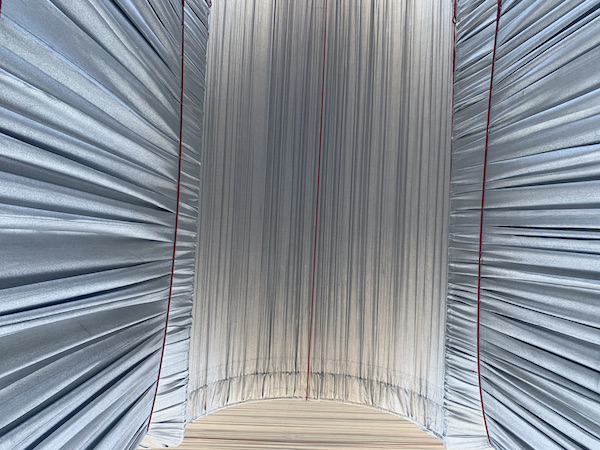 The day I was there, the crowds were buzzing with the excitement you find at a pop concert. Schoolkids, families and art lovers. Paris, so often under curfew during the pandemic, with the life’s blood of the city: restaurants and museums closed for so long, needs this. It felt like a liberating moment. It felt like freedom. And freedom can also be an act of the imagination.

After a year and a half, where we all experienced the feeling that we were missing out, I really hesitate to say this, but the pandemic has added another complex layer to the ephemerality of the project.

We need public works like this, we need excitement in our lives, and we need to be overwhelmed, astounded and confused. Just the sheer audacity of making the impossible possible, is part of its appeal.

Jeanne-Claude was a firm believer in the aesthetic beauty of works of art; she said, “We want to create works of art of joy and beauty, which we will build because we believe it will be beautiful.”

On the other hand, they’ll always be people like Florian Philippot, the French politician, who said that it was “a garbage bag draped over one of our most glorious monuments.”

Christo himself said: “Every interpretation of the project is legitimate, even the most critical and the most positive.” To Christo and Jeanne-Claude, your interpretation of it, or mine, or even Philippot’s, are equally valid. It is a public work of art, and we should expect the public to make a judgment.

For me, it does exactly what art should do; it shows that imagination has no limits. 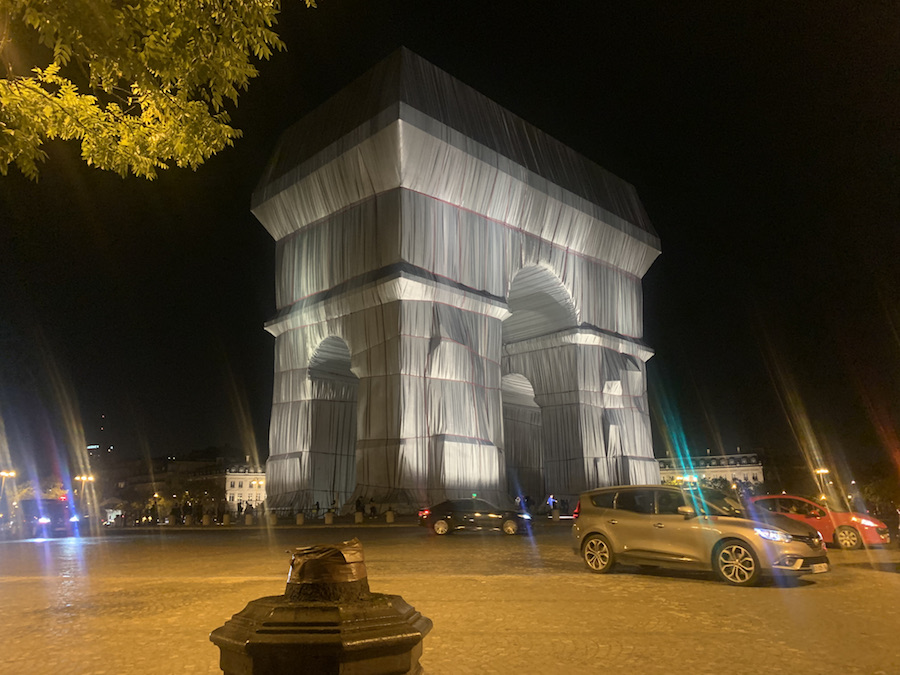 The Arc de Triomphe is a French icon that will survive. Military parades will still take place here, cyclists use it for the Tour de France final lap, and the eternal flame for the tomb of the unknown soldier will stay aflame.

Christo and Jeanne-Claude are not criticising the most emblematic monument in Paris; they are honouring it. They just wanted us to think about its purpose, its meaning and its place in the French capital.

Part of the huge interest in this was knowing that this is probably the last project of this scale by Christo and Jeanne-Claude we’ll see.

For artists who started their career in Paris, it seems apt that their final work, their goodbye to the world, should be there. Their work may be ephemeral, but Christo and Jeanne-Claude will always be remembered. As Christo himself said, “Beauty, science and art will always triumph”.