The exhibition, AMALGAM by Theaster Gates, now showing at Tate Liverpool is an experience not to be missed with a poignant message for our times. A message that raises awareness of the consequences of racism and particularly with a focus on rediscovering and raising awareness of the positivity within mixed-race communities in our history and present, something that Theaster indicates has less attention and significantly falls outside people’s normal understanding of mixed-race communities and relationships.

The idea of difference, intermingling and becoming one, celebrates and unifies the exhibition

Amalgam means mixture and blending. In the exhibition, it stands for “racial, ethnic and religious mingling as well as the art of mixing and assembling various objects.” Theaster is an artist, performer and urban planner based in Chicago, USA. This is his first solo museum show in the UK. 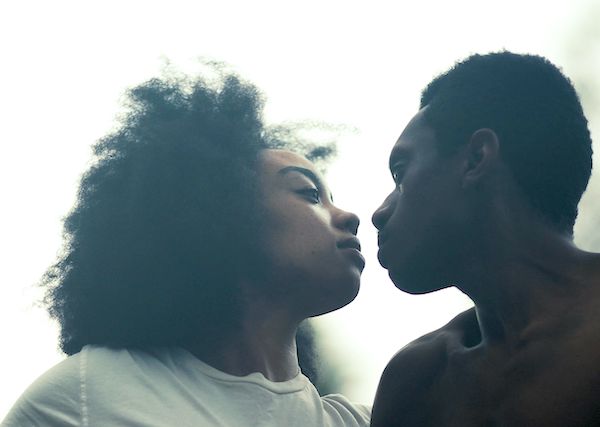 Theaster Gates Still from the film Dance of Malaga

The gallery space is carefully displayed and you can walk through with ease into six areas of this exhibition. What is particularly pleasant is there are no labels or writing to describe each artwork. The information is in a supporting booklet, but the lack of reading in the gallery allows you to reflect solely on the artworks and the exhibition without any distractions. I enjoyed this aspect and I only referred to the booklet at the very end to find out more about the artworks and their titles.

The exhibition ‘Amalgam’ explores its title. The idea of difference, intermingling and becoming one, celebrates and unifies. Theaster said he felt the exhibition was actually about “commodities becoming part of humanity”. Theaster engages with history and artefacts to express this message more clearly to the viewer by educating us about an island called Malaga, which is based off the coast of Maine in the northeastern US.

Malaga Island was once occupied by a small mixed-race community of black and white heritage, all living together in harmony from the 1860s, at a time when this idea was rejected entirely and racial segregation was enforced across the US, with some states banning interracial marriages and relationships. This island at the time existed with everyone cohabiting and all happy together during those turbulent times. However, it was not to last as in 1912, the state governor of Maine suddenly stepped in and banished everyone from the island to the mainland so that everyone was forced to separate and leave their homes with no offer of any support, jobs or housing. The decision was encouraged by eugenic, racist and economic theories at the time asserting that “ the mixed heritage of Malaga’s population made them genetically immoral or criminal, and that their presence damaged the reputation of the state.”.

Discovering this allows us to comprehend just how deep the racism was and how much the governor wanted to destroy this Amalgam. At the time, the governor used the excuse that they wanted the island for tourism. Still, nothing actually ever took place and the island remained desolate for years and unused even though everyone had been evicted and lost their homes.

While viewing the exhibition, we were very grateful to be given a talk by Theaster. He described how he came across this island at the time, travelling with a friend and how he stumbled across the island’s history purely by chance. He gradually developed his work around this narrative and history. He spoke about how the interracial aspects of relationships and families are not often talked about and how racism still incites fear and the obsession with separation and so-called ‘purity’. They have this fear of mixing and of different cultures coming together. This obsession with segregating and detachment are all very linked to this concept of eugenics. It is disturbing to think this thinking is around us still today.
The exhibition, Amalgam challenges this idea with some fascinating artworks by Theaster Gates.

The exhibition opens up with a large installation titled ‘Altar, 2019’. Made from wood, slate, plaster, glazed clay, graphite and neon, this work is inspired by the former homes of Malaga and occupies the approximate dimensions of a three-person cabin on the island. “Gates has also researched a timeline that situates Malaga among the wider history of Black and mixed-race people in the US and the UK from the transatlantic slave trade, to laws against interracial marriage up to present-day events.” In the installation, ‘The Island Modernity Institute and Department of Tourism’, 2019, Theaster has assembled a tourist information structure, a relic and archive for the Malaga Island consisting of found objects he has created and found that resemble the island’s history.

There is a sense of the museum, tribute, and memorial towards the island within this exhibition. In-room 5, there are assembled vitrines with objects or ‘resurrections’ as Theaster refers to them, that reflect the island’s history. Everything is related and symbolic of the historical and symbolic context of the exhibition.

Throughout the exhibition, Theaster blends a mixture of materials to create sculptures produced via fusions of various materials including wood, concrete, tar, bronze and discarded items, allowing us to question their historical and social contexts. 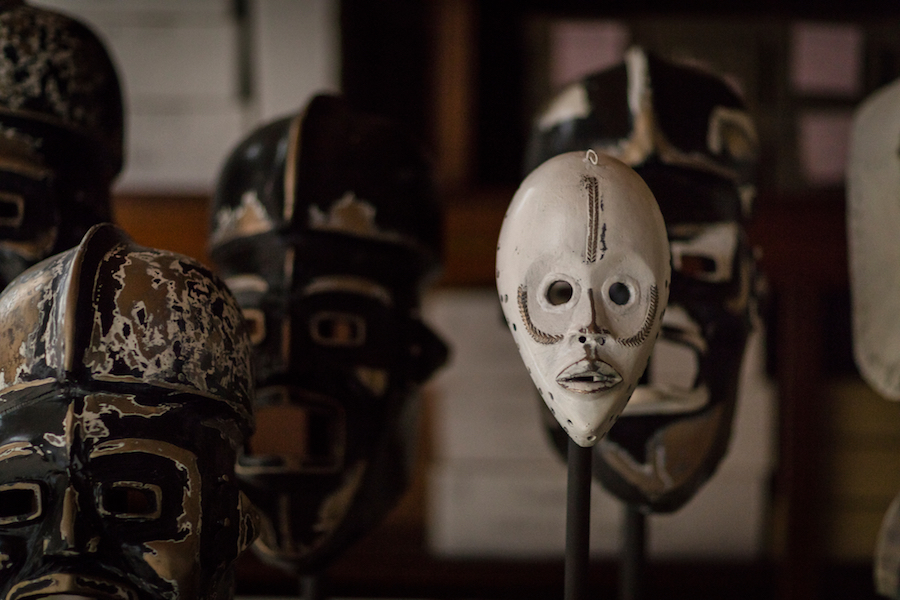 Installation view of Amalgam at the Theaster Gates studio

Theaster’s film titled ‘The Dance of Malaga’ , 2019 incorporates the history of the island and music by Theaster from his band ‘The Black Monks’ who often collaborate with art, ideas and music. The film raises awareness and is quite shocking in areas in its referencing to archaic attitudes towards mixed-race in its archival footage.

The final installation, ‘So Bitter, This Curse of Darkness’, was fascinating, a forest of ash pillars of different lengths salvaged by the artist, with certain columns acting as plinths for African wooden and bronze masks of various origins that had been cast by Theaster to reflect the need to preserve the memory of the island. There was much referencing to African Art. This forest of ash is a beautiful and powerful installation.

A fascinating exhibition that draws attention to the idea interracial communities, history and archival material, territory and inequality in the United States. I highly recommend visiting this exhibition.

Downstairs at Tate Liverpool, there is another exhibition by Swiss- Argentinian artist, Vivian Suter. The artist presents her recent work, ‘Nisyros (Vivian’s Bed)’, 2016 – 17, her largest installation to date consisting of 53 large – scale brightly coloured paintings inspired by the tropical landscape of Panajachel, in Guatemala, Central America where she lives and creates her art.

I thoroughly enjoyed this installation. The brightly coloured abstract paintings were painted onto raw canvas and were very much a kind of happening. They were suspended with wire from the ceiling like banners and similarly to Theaster Gates’ forest of ash columns you weaved in and out of this forest of paintings and colour. Vivian has said, “It is also important, especially if I show them on the rack structures, that the paintings are not just paintings, but they can also be like a sculpture. The layers look so great—like hiding and then showing, or not showing and making things mysterious. At Tate Liverpool, the whole room will be sculptural; I hope they let you touch them.” 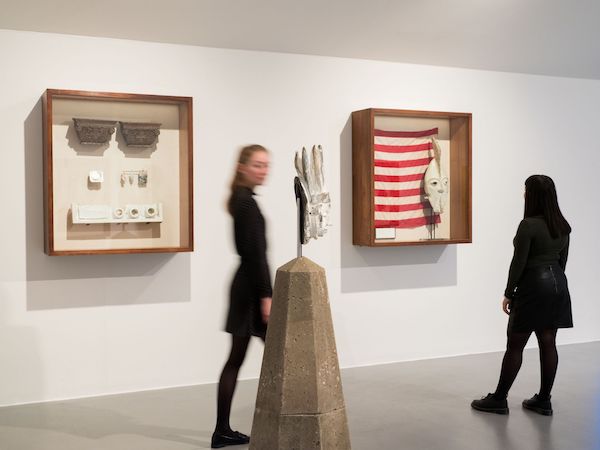 The bed installation was a painting in itself, a bed covered in canvas painting surrounded by ‘dreamlike’ artworks. Overall there was this sense that you were walking into a dream, through colour and pattern. It was a fascinating sensory experience.

Vivian had also celebrated the combination of environmental elements within her work and allowed the paintings to mingle with rain and mud and whatever had randomly happened to her artworks she had embraced and incorporated into her art. “After a tropical storm destroyed large parts of Panajachel and flooded one of Suter’s studios resulting in damage to her works she decided purposefully to leave her canvases outdoors embracing the influence of nature. The colours, motifs and movement of her brushstrokes are influenced by organic shapes, with a palette that ranges from various shades of green to dominant reds and yellows and occasionally you will discover remnants from the surrounding landscape within her work such as twigs and leaves that have congealed into the paint.”

This immersive environment is beautiful and emanates the rainforest and the environmental conditions in which they were made. I found Vivian’s work very sensual and expressive. There was an immediacy to her work and breaking away from traditional concepts of presentation. I also enjoyed the way Theaster used the idea of artefacts and museum display cases to add another layer of meaning to the presentation of his assemblage and installation.

Do go and see these fascinating exhibitions. They are thought-provoking and visually dynamic and beautiful.