This is the third iteration of an exhibition which has arrived from Taft Museum of Art in Cincinnati via the Scottish National Gallery in Edinburgh. It’s easy enough to imagine the conversations as it was planned. Who’s going to turn up to see why the apparently conventional landscapes of Charles-François Daubigny (1817-78), a member of the Barbizon school who was rich and famous in the nineteenth century but little-recognised now, should return to the artistic summit? Not many: we’d better include some other artists – perhaps the most bankable possible.  How about the title? ‘Daubigny in his Times’? I guess not. ‘Daubigny, Monet, Van Gogh: Impressions of Landscape’? That will do nicely…  Yet, even if there were any such opportunism, it doesn’t undermine this show in the slightest. First, because Daubigny is a figure worth reviving. Second, because the connections made are elegantly demonstrated and far from spurious.

Looking at a typical Daubigny from when he first found success in the 1850’s, it is hard to see why he proved a divisive figure, with factions claiming him both as the ultimate realist and as radical slipshod  who failed to finish his paintings properly – so that he gave, it was said as early as 1864, only ‘an impression’ of the view. To our eyes, Daubigny’s grounding in the actuality of nature is as clear as the artfulness with which he leaves his technique visible: pallet knife on clouds, a blurred drag of reflections, various precise abbreviations which keep the surface lively and the viewer’s eye active in moving between what is depicted and how.  And though he remained true to the principle of painting only what he saw, it’s apparent that he didn’t paint it all, editing for composition (as well as to exclude most aspects of modern life). Moreover, Daubigny’s preference for a panoramic format twice as long as high – such as the 88 x 182cm Banks of the Oise, 1859 – adds drama. The 38 Daubigny paintings in Amsterdam include several such, for this is itself a highly edited account of Daubigny. He produced thousands of paintings over a prolific forty year career, many of them on the small scale suitable for sale to collectors,  often painted at the more conservative end of his style to suit the market. What we see are mainly the showpieces Daubigny produced with the Salon in mind, hoping for state and institutional sales.The case to be made here, then, is that Daubigny deserves to be considered alongside Courbet, Corot and Millet – as, indeed, he was at the time. Daubigny recognised kindred spirits and embraced the new artists: he was an influential member of the jury which selected several the next generation for the 1866 Salon before Monet’s Impression, Sunrise, 1872,ushered in ‘impressionism’ as a recognised movement. His example mattered to the impressionists, and now their ideas began to inform his work, which gets brighter and looser, though always within the bounds of classically balanced composition. The exhibition aligns paintings most effectively to demonstrate the to and fro of influence.

On the ground floor, we see Monet (and also Pissarro) through the lenses of their awareness of Daubigny. There is read-across from the older artist in terms of subject matter and approach as their views of the same places – notably Villerville on the Normandy costs – are hung side by side. Daubigny was also a practical forerunner: Monet is famous for using a studio boat to enable him to paint comfortably in plein air and depict the riverscape as from mid-stream. 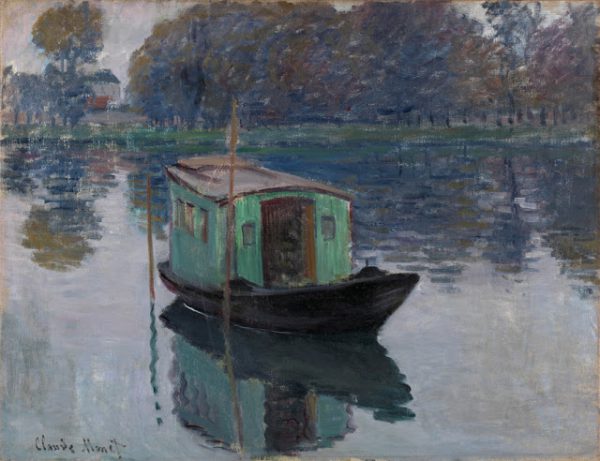 Daubigny was there earlier, one of the first to paint outside (exploiting the new availability of paint in tubes) and using a bigger boat – its dimensions are reconstructed in the exhibition – with a similar idea. 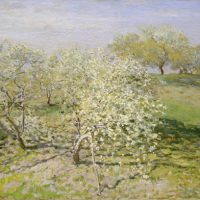 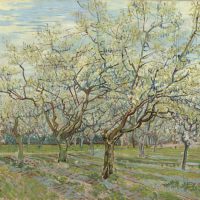 Later the influence was mutual. Daubigny was first with the subject of orchards in blossom, which he painted regularly from 1857. His take is juxtaposed with Monet and Van Gogh’s, both of which push the floral intensity quite a bit further. Another telling comparison is of fields of poppies, in which an 1874 Daubigny gives Monet a fair run for his money. Daubigny’s late style could be bold and broad, focused on the emotional impact of a landscape and on meteorological variation rather than the precise delineation of its forms. 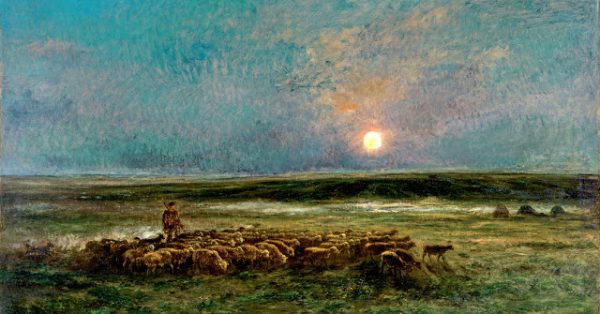 In the words of the great champion of the  impressionists, Zola, the  ‘limpid grandeur’ of Moonrise at Auvers, 1877, is ‘far from the classical style, which lacks anything personal’.

Daubigny died before Van Gogh became an artist so that influence operates only one way. Van Gogh’s letters mention his admiration of Daubigny, he adopted his subjects, and he spent the last days of his life in Auvers. Van Gogh moved there for Dr Gachet’s care, but the fact that Daubigny’s house was in the town was a bonus which led to paintings of his garden and – the curators argue – Van Gogh’s adoption of a wide horizontal format for his last paintings, such Crows over a Cornfield, 1890.  There’s a clear link as the show unfolds between the three principals: all have a passion for nature, and seek to express it, the difference being the degree to which they allow their engagement to come to the surface: from Daubigny to Monet to Van Gogh represents an escalation of intensity, but a similarity of intent.To keep it in perspective: Daubigny isn’t going to blow you away from across the room the way Monet and Van Gogh can. And it would be going too far to present him as a proto-impressionist in the 1850s because his theoretical framework was different: Daubigny wasn’t painting the sensation of light as his primary reality, just painting objects in an undogmatic way. 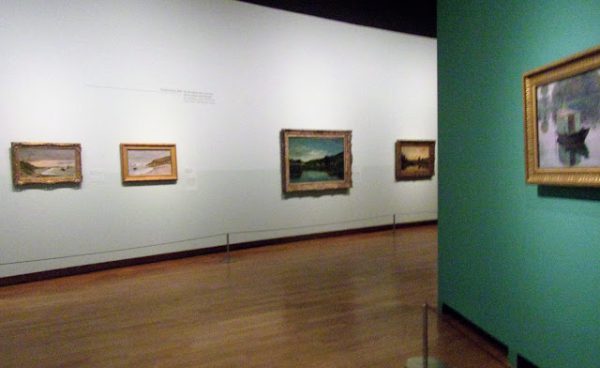 The Amsterdam leg comes with three features additional to its previous presentations. First, unsurprisingly, more paintings by Van Gogh. Second, a gimmicky-sounding exhibition design which is actually implemented sensitively enough not to intrude: there are wall-sized videos of contemporary river scenes; the ground floor walls are painted in gloss and matt blues which suggest a waterline such that the paintings – as well as the boat – could be afloat; and the upstairs floor walls are coloured to suggest a sunset, in line with another subject covered by all three artists. Third, there’s a bonus room bringing together the Van Gogh Museum’s choice of French landscape drawings from its extensive collection, putting the famous three in a broader context.Overall, then, in terms of the work shown and the story told, this is a very fine exhibition.  If you haven’t seen it elsewhere it would certainly make a good focus for a trip to Amsterdam. In which case, you might ask, what other art might I see there now? Up Now In Amsterdam Two days is enough to see all the contemporary art in Amsterdam without feeling rushed: that’s maybe 20 commercial galleries and 10 institutions, and, even without that narrow range, patterns began to emerge (and quality was good – I’ve listed close to half of what I saw below):

A strand of Dutch post-feminist surrealism could be posited from three fascinating shows: Scarlett Hooft Graafland at the beautiful classic townhouse of Huis Marseille Museum for Photography; the three semi-documentary films of Melanie Bonajo’s ‘Night Soil’ sequence at Foam, which look at modern alternative rituals around drugs, sex and food (she rather dominated Foam’s headliner, AI Wei Wei); and Femmy Otten’s fantastical tales of the sea at Fons Welters. Those three together would make for an intriguing and popular show at, say, Camden Arts Centre… 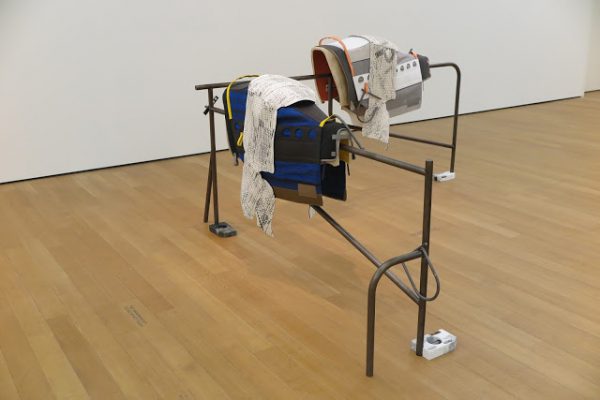 London-based Dutch artist Magali Reus had  a wonderful room of new work at the Stedelijk (where the big show was of Jean Tinguely). I wasn’t so impressed by Hanae Wilke at Ornis A, apart from how close she was to being the better known Hannah Wilke. Her aesthetic seems to relate to Reus’s, though – then I noticed she, too, is from The Hague… 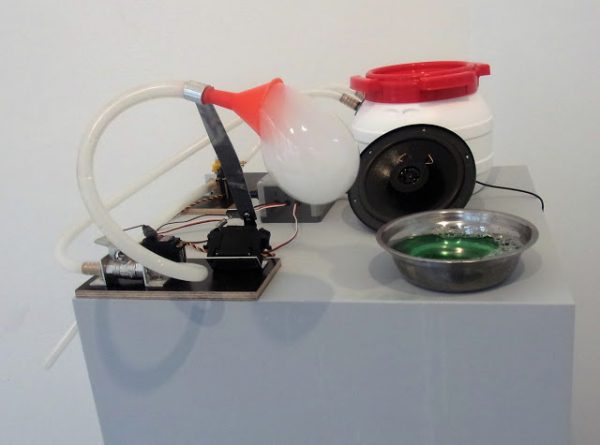 The Tinguely show was also upstaged. On the one hand, it went through the motions well enough – on the other, there was hardly any actual mechanical motion, which is his essence. That left the coast clear for a most engaging dry-ice speech-bubble poetry machine by Maria Barnas at Annet Gelink, which set off its effects as it meditated on the possible materiality of the letter ‘o’. 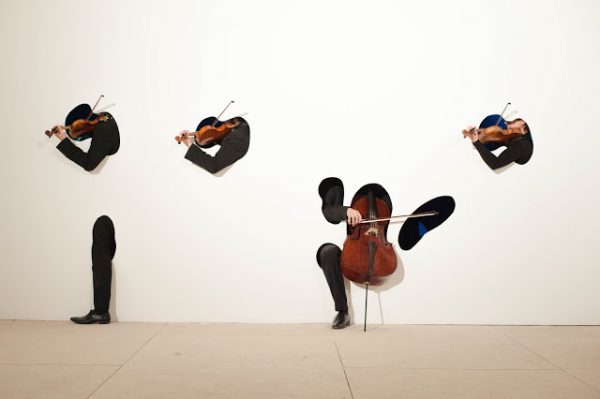 De Appel had riotously imaginative show by Gabriel Lester and collaborators, albeit ‘Unresolved’ by both title and nature (deliberately so, to reflect De Appel’s own parlous state). The big hit for me was his film ‘Murmur’, in which a string quartet plays behind the wall of a gallery as they argue cattily among themselves about the rights and wrings of the art world. 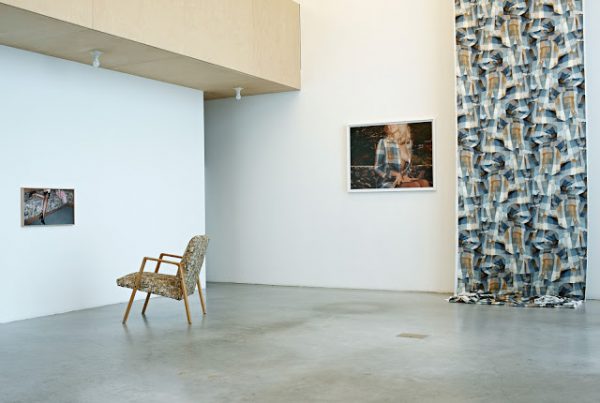 Two other shows, both in the fresh and breezy northern part of Amsterdam, examined particular languages with conviction. Eva Stenram is known for repurposing vintage glamour photographs, and at the Ravestijn Gallery (which is in the office of a creative agency) she showed them with textile installations taken from the textiles in the images – even down to the effect of foreshortening – so that the conditions of image reception were complicated and foregrounded. The film museum EYE has impressive exhibition spaces, which did justice to what may remain the definitive examination of the endgame of celluloid as a photo-sculptural practice. 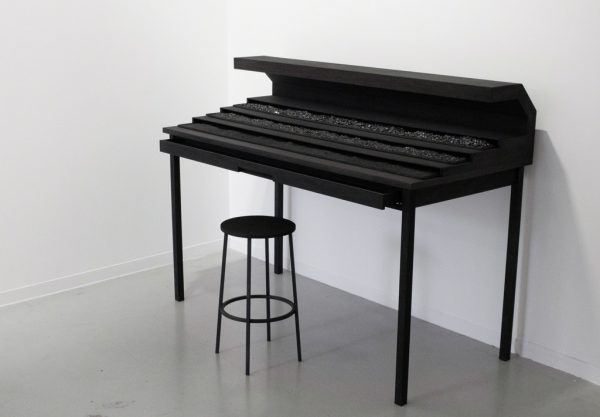 Stigter Van Doesburg provided a nice complement to the Van Gogh Museum: Saskia Olde Wolbers’  film voiced by the house in which Vincent lived in Brixton in 1873-74, originating from Artangel  in London. It was good to see the Amsterdam iteration of Levi van Veluw’s outstanding The Monolith – closely related to his London show (at Rosenfeld Porcini to 26 Nov) in overall impact, but with two immersive environments, one of them watery. Both derive from his mother of all installations at Maastrict, which you can get a feel for athttp://levivanveluw.com/work/relativity-matter-film-0. Another prior favourite was at Ellen de Brujna Projects, and watching it in better conditions than before leads me to emphasise that if you get the chance to watch Erkka Nissinen’s animation What Is Community?, you should take it! 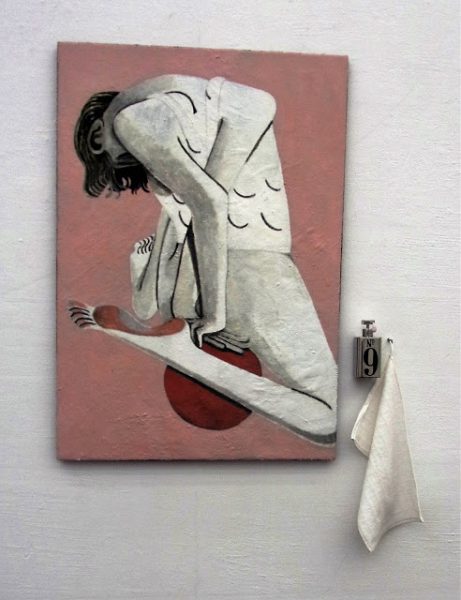 That leaves only a couple of shows I liked which didn’t really fit with anthing else: Gerhardt Hoofland had German painter Lenz Geerk’s brilliant use of looking at the soles of one’s feet as ‘a metaphor for the operation of self-reflection and self-profling’ by way of thick paintings on wool of people contortedly attempting just that, shown (a little unnecessarily) with foot lotion dispenser and towel. And young Slovak Aljaz Celarc set up a self-sustaining world of ice at DSC & H Gallery in the complex environmentally resonant ‘A Stagmite for Sisyphus’, which certainly took my ‘best show title’ title.