The female participant in Tino Sehgal’s ‘Kiss’ is stretched out on the floor, head arched, looking back, as her partner moves in slow motion towards her. A mother entering the Great Hall at Blenheim Palace with two boys in their early teens and a young daughter responds to the daughter’s question about Sehgal’s constructed situation with an ‘I have no idea what that’s about’. The female participant looks at other onlookers, catching the eye of the man beside me and then holding my gaze for what feels like an eternally extending moment before her partner reaches her and they kiss. Sehgal and his team give a moment of intimacy beyond that of touch, which the passing mother might have understood had she not felt her children to be a distraction and responsibility.

Elsewhere, it is the children that truly see. The Upper Water Terrace has the Churchill Cabin café located alongside so, when the fountains stop and four participants enter the waters to move in ways that echo the shapes of the surrounding topiary while an organ plays from an upper room in the Palace, many of the adults continue their meals and conversations not ready to engage with something so unusual and strange. The children, however, watch transfixed. Sehgal constructs his live encounters in ways that require adults to cross boundaries and move out of their comfort zones, if only for a moment if they are to engage. Children have not learnt such boundaries and therefore engage naturally and elementally. Sehgal’s work reveals the extent to which, as adults, we need to work hard if we are to recover the sense of wonder we once possessed as children. 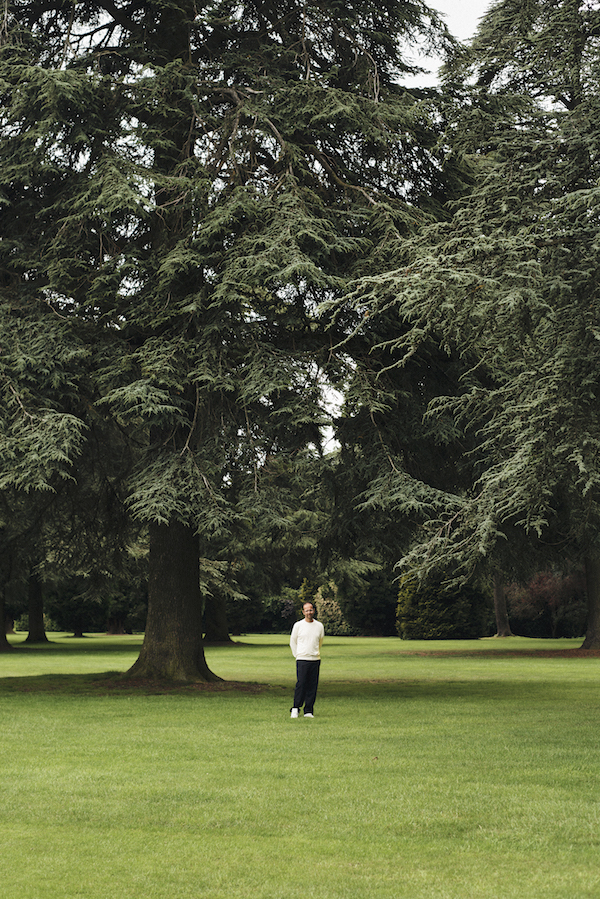 Tino Sehgal in the grounds at Blenheim. Photo by Edd Horder Courtesy of Blenheim Art Foundation.

Participants in the swarm who roam the Palace’s extensive grounds as a flash mob creating scenes in key spaces are drawn from a team of 52 specially recruited from the local area for the length of this exhibition. I spoke with one of today’s team before I left, who explained that he was drawn in by his daughter, who auditioned and then was asked whether other family members might also take part in Sehgal’s search for a diverse and representative group. For these participants, the experience of taking part had been incredible while also taking them outside their comfort zones.

The most challenging aspect for the participants has been approaching strangers at random to tell a personal story before moving on to the next scene. This element of the exhibition reprises Sehgal’s 2012 Tate Modern commission ‘These Associations’, in which 150 participants told their stories to those who filled the Turbine Hall. The storytelling is another challenge for those visitors for whom Sehgal’s is a fresh encounter; some are intrigued and engaged, while for others, their body language suggests this is an encounter to endure.

As a priest, this part of the exhibition felt like familiar territory as most pastoral encounters begin with someone retelling their story. On my visit, I heard stories of resilience – a mother who had dealt with the demands of a husband with a roving eye and the challenges of bringing up children with disabilities; solidarity – a single rose offered by dog walkers to an owner whose dog had died; freedom – found when walking empty streets at night during lockdown after days spent studying online; and disappointment – a spoilt holiday when a father who was a detective received a call to investigate the Great Train Robbery on the night before leaving. Though part of a constructed encounter, hearing real stories of deep significance never fails to be moving and raises the question as to why so many of our regular encounters with others remain on the surface when real connection is to be found by plumbing the depths.

Tino Sehgal at Blenheim Park and Gardens has also been a challenge to the artist, one he was happy to accept. As a result of the pandemic, the exhibition was commissioned and arranged in a much shorter time period than usual and with additional regulations to be met that impacted on the exhibition’s shape; in particular, by working primarily outdoors in the expanse of Park and Gardens. Sehgal has responded with a mix of new works and by reworking or referencing earlier works. The new works include ‘Untitled Scene for the Great Court’ where the swarm separate into two separated groups facing each other across the Great Court before soloists from each group move slowly to meet centrally in a crescendo of high-pitched sounds and movements that enable encounter after separation. The swarm are involved again in ‘This Joy’ where beatboxing, headbanging and dancing are the accompaniment to Beethoven. ‘This You’, though, is solo and personal; songs sung in the Secret Garden in response to your mood as gauged by your body language on approach. Walking with a member of the Blenheim Art Foundation team, we were treated to a rendition of ‘Lavender’s Blue’ with its promise of future favour.

There are three strands to Sehgal’s work here: responses to location, nature, and the pandemic. These can be witty juxtapositions, as with the location of ‘Kiss’ in front of Massimiliano Soldani Benzi’s ‘The Medici Venus’ and ‘The Clapping Faun’. The contrast bringing to the fore the joy and challenge of sensual expression in the live encounter as opposed to its taming in the aristocratic acceptance of classical form. Then, in the first scene I encountered involving the swarm – a chanted work in the East Courtyard – came the most explicit reference to Sehgal’s wish to address the global sustainability challenge of the coming decades.

However, the strongest strand to emerge is a celebration, after a long year distanced one from another, of the fleeting, immaterial magic of human connection through bodies together in spaces and the everyday poetics of people’s lives and stories. After our experience of pandemic, that felt more than enough.