The Titian show at the National Gallery in London has arrived at a particularly inauspicious moment. Major public galleries in Europe are indefinitely shutting their doors because of the coronavirus. Since writing this review, The National Gallery is now temporarily closed. Just a few days ago, they announced the postponement of its Artemisia Gentileschi show. The Titian exhibition, subtitled ‘Love, Desire, Death’, was scheduled to run there until 14th June. If you are an enthusiast for painting, still more so for the work of the grandest European Old Masters, it would be a pity to miss it. Hopefully, it will be back soon.

It’s largely a show about fatalities, triggered by encounters between a divinity and a mortal

The show consists of relatively few paintings: a series of large compositions that Titian called ‘poesie’ – ‘poetries’ – based on the work of the Latin poet Ovid. The patron for whom they were produced was Philip II of Spain. They were delivered, when ready, to various addresses all over Europe, depending on where in the Hapsburg dominions, or in England as the royal husband of Queen Mary I, that Philip happened to be at the time. 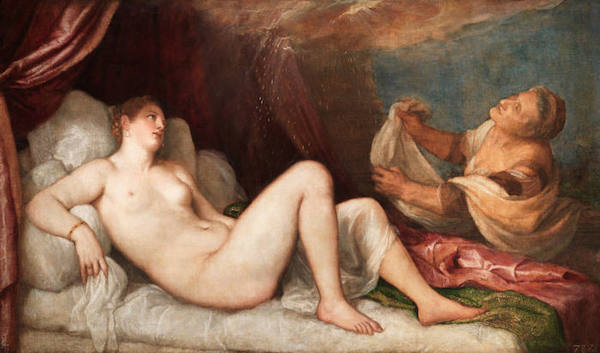 The likelihood is that the series hasn’t been seen all together in one location, for about four hundred years. Today two of the paintings are held jointly by the National Galleries of England and Scotland, in both cases acquired fairly recently. One is from the Wallace Collection. London, where the rules have been bent to enable a loan. One id from the Wellington Collection at Apsley House, also in London. Two more come from abroad – from the Prado in Madrid and from the Isabella Stewart Gardner Museum in Boston. An addition – from a similar date but not from the original series – is the National Gallery’s Death of Actaeon.

It’s largely a show about fatalities, triggered by encounters between a divinity and a mortal – Venus and Adonis, Diana and Actaeon, Europa carried away by Zeus in the form of a bull. In one case only is there a rescue rather than a fatality: Andromeda saved by the hero Perseus. A constant theme is the helplessness of mortals when they are in contact with divine power. Titian, who claimed to be ninety years old when he produced this sumptuous series of compositions, seems to have relished this. So too, no doubt did his then much younger royal patron. The Hapsburg monarchs had no doubts about their rights in the complex sphere of European politics.

It’s also an exhibition about what visual art can do in the hands of a great master. One adjective you could never apply to these pictures is ‘apologetic’. Europa being carried away on the back of the divine bull (who rolls a sly eye, complicit with us, his audience) doesn’t have the slightest chance of escape as she clings to one of the horns of her abductor. In the bull’s wake, a cupid astride a fish revels in the sea. High in the sky are two more cupids, bows and arrows at the ready. The painting is a paean to the world of physical sensations. It aims to carry the spectator away, just like Europa. It doesn’t matter what age or gender you are – one glance and you are Titian’s prisoner, just as much as Europa, unbound but clinging to the bull, is prisoner to Zeus. Art is a dangerous thing.