“I had an idea in the late sixties, like putting my poems on matchboxes. I wanted to do poems on marble. I was a poet, but not in the art world. Five years ago, Jean de Loisy asked twelve artists to do things at Chateau de Versailles, outside of Paris. He specifically asked for poem stones, which were a popular fashion in 17th century France. Words from Voltaire would be chiseled into stone, in one inch high letters that were tiny and did not look so great. Jean put my stones in the Temple of Apollo, it was a great success. That’s how I got started.” I am in the loft of legendary poet, activist, pioneer performance and visual artist John Giorno, where we are discussing his current show at Sperone Westwater Gallery.

For over fifty years, John has lived and worked in his Bowery loft and his iconic presence continues as an international inspirational in the cultural underground. 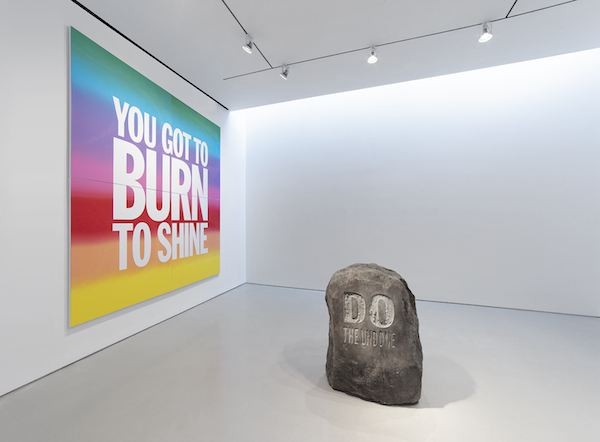 Do the Undone:  John Giorno at Sperone Westwater

“I love the faults in stones. What I like are the older stones that have been abused. These are from the Delaware Water Gap, they have been rattling around for thousands of years, It’s like a graveyard of three Ice Ages. These bluestones have been battered by the Ice Age. When the bluestone was being formed, the granite was inside. So it’s like the letters in granite are peeking out.”

John Giorno first mesmerized me when I was a teenager in the 1960s attending his poetry performances in downtown New York venues. His revolutionary “Dial-A-Poem” series presented contemporary poets in live recordings, accessible by telephone. His earliest silk-screened works were passionately political, and John uses the same typeface developed for him in 1984. He is also one of the only poets who headlined rock and roll tours, across America and Europe.  At the 2015 “I Love John Giorno” exhibition, curated by his husband, Ugo Rondinone at the Paris Palais de Tokyo, eager fans lined the block awaiting admission. From Paris, the same show travelled to NYC in 2017, spread across thirteen free venues. The expansive retrospective included archival and personal treasures, as well as tributes from contemporary artists.

“Do the Undone”  his first show with  Sperone Westwater, expands his trajectory of using words from his poems in silkscreen and watercolors. The latest text silkscreens feature his epigrams on large scale varied rainbow backgrounds. A practicing Tibetan Buddhist, Giorno merges compassionate philosophy with a post-punk sensibility. Thus, phrases like “Life Is a Killer’ resounds from the poetic to the profane. The large striated rainbow pieces, acrylic on canvas, are sharp, concise and always transgressive.

Loose brushwork contrasts against the words, (double-edged homilies like “Space Mirrors Mind”)  offers a very different experience from the technicolor precision of the silkscreened rainbow paintings.

With his latest work of stone sculptures,  Giorno’s imbues his hand-carved epigrams with an obdurate power. Thus, “Do the Undone” can be read in three different iterations, from the energy-filled large rainbow prints to the more lyrical watercolors and finally, crystallized into eternal stone. The boulders are from the upstate Barryville area and were carved by local stonecutters.

Those who are hungry for more of Giorno’s work will have the pleasure of the March publication of his long-awaited memoir, “Great Demon Kings.” The book has been decades in writing, and John says he was surprised, “They left all the gay sex in. The world changes.” This volume details his early life, and photographs will be liberally interspersed with text.

In 1997, William Burroughs, who lived in Giorno’s Bowery loft, in the famous Bunker, died. Shortly afterward, Giorno met his now-husband, Swiss artist Ugo Rondinone. There’s another book there, and one which is eagerly awaited.

Another project that John has recently done is part of the augmented reality work, now shown in worldwide Apple stores. Curated by the New Museum, other featured artists include Pipilotti Rist and Nick Cave. John’s piece, “Now at the Dawn of My Life” was shot in San Francisco and is booked steadily for the new six months.