Molly Brocklehurst curated this small group show to a grand idea that stems from her own work as a painter; to use art to examine the philosophical and existential reality of looking back at memory itself. The rosy-tinted spectacles with which we view the golden age of our childhood are part of our cultural landscape. I’m well aware of those glasses and their effects in English literature from Beowulf and onwards. Nostalgia for a golden age that has passed.

Whereas Utopia, well that is another strong conceptual word about human vision. A concept of literature, a word coined by Thomas More for that perfect world of the imagination. More was looking forward to a possible future, creating an imaginary universe to disturb our thinking about the present. 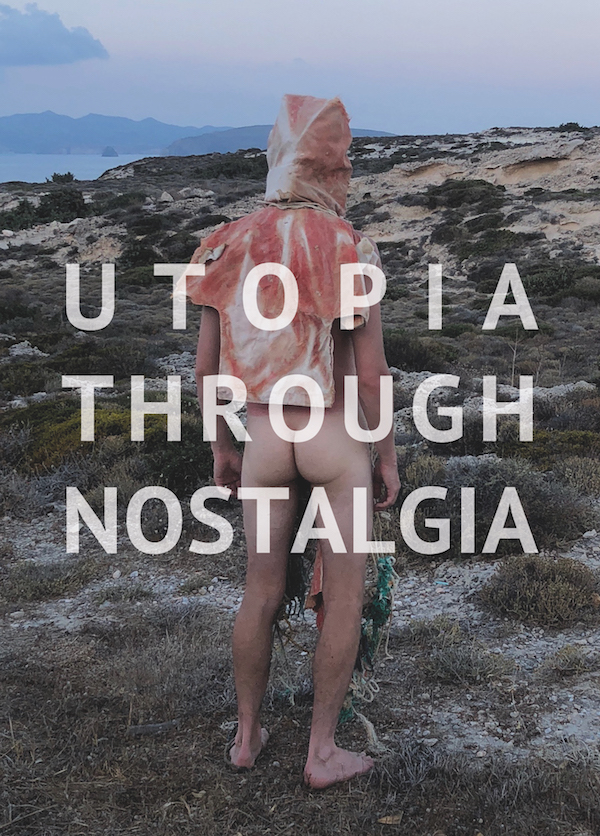 By bringing these two huge ideas together in her title, Brocklehurst’s project is pulling in multiple directions at once. And the group of artists she has selected, like naughty children have run off in their own directions.

Many of the works I witness in my flying visit, present at the gallery briefly before an event that unsettles the artwork with chairs and projector (for a Laydeez Do Comics gathering) are not utopian, but dystopian. It is hard to do an effective piece of art as utopia. An artist, a poet, a writer wants to bring the commentary in from the marginalia, in from the reader and place it inside the work itself. Brocklehurst’s bold title sits uneasily with the work on show here. But perhaps that’s okay. I can think of it as an aid to thought rather than a summary of what is on show.

And thinking that way is appropriate when I ask Brocklehurst about her curating methodology. Contributing are eight artists, some of whom she had never met before. This is an experiment, a laboratory of pieces. And the output contains more tension than she expected.

Brocklehurst’s own paintings appear based on old photographs. Cut out characters from sepia and black and white photographs are posed or pass in front of sunset backdrops, shadows on the figures are disconcertingly in dialogue with the scenery. I like the way they unnerve, although a blankness in the expressions and the simplified background creates an alien, hostile world rather than one which attracts. The finish is too hard-edged for comfort. Another painter, Lydia Blakeley, has produced large painted canvases that are dependent on the artwork and imagery of magazines, the kind of American, 1950s glossy finishes of advertisting that have always frightened me. I only have to see a circle skirt and a pair of stilettos, or even a lipstick smile and my scruffy hippyish self starts to scream. For me the 1950s are a terrifying time in media of domesticity. Bring on the beatniks as quick as you can I say, the alternative, only the alternative culture is safe at this time.

I’m struck by Richard Porter’s wittily textured ceramics, the kind of piece you pick up and feel in your mind. Clever combination of finishes, matt and gloss, fluorescent and oxide a dark breen and bilious pink colour scheme enhances his, it must be said, dystopian work with chaos and disaster at his heart. A plane crashes into – what looks like – ceramic seaweed. Punishment, violence and scapegoating creeps in to a rural or underwater environment.

Another favourite piece included is Chieh An Tang. Her vision is delightfully kinetic and participative, two aspects of art that I don’t always appreciate being quite sour and dour. (I am from Manchester and my family is working class Scottish if that helps elucidate my aesthetic attitude!) But this work won even me over. Sewn calico pillows, embroidered with words that suggest the passing of time. ‘Never Return’ ‘Never’ ‘Tick Tock’ ‘It” are filled with ice. One by one they are placed on a bronze tree in a bucket and drip drip drip away into the water at the bottom. So it changes. It glistens. The micro-textures are fairy-tale, enchanting. This is a piece to spend a long slow time with, but also is a little harsh too in its colour scheme, with the spiky bronze tree as though it has soft thorns – like the blackthorn bush.

I have come to see the exhibition because of an invitation by participating artist Doug Haywood, a sound artist who was brought in last minute to make a contribution. He chose the stairwell, an unclaimed space, in order to locate a sound piece put together specially for the show. Using station announcements from railway stations in different locations he has suggested the feeling of waiting, passing time. How much of our lives is spent like this. If we don’t commute, we travel for fun. We stand on the platform. We hear the sounds. Haywood’s piece, by using tannoy field recordings from diverse stations illustrates that this experience may be, in a sense, universal, but also the potential for difference. I feel an environmental comment in the inclusion of birdsong, even if this was not Haywood’s intention. And a social comment. For me, I cannot help but reference ‘Adelstrop’ by Edward Thomas. If you haven’t read it, do. Late June, listening to the birds of Oxfordshire and Gloucestershire. In Thomas’s poem it is an unexpected stop on his steam journey, a counterpoint to the busy-ness of life. As it becomes in Haywood’s sound piece.

Showing alongside Haywood is an artist he very much enjoys showing with, Norman Mine. His work here is very cheeky, playing on the IKEA flatpack and on the trope of the accompanying instructions. A chipboard screen in a video folds and moves as he turns and twists it. The actual screen is here, lodged in the corner of the room, unable to move, apart from a little section that pulls out and in. The play on retro-futurism of the ideal home is cute and thoughtful. I’m impressed by the gestural nature of the piece. The fluid video versus the wedged board. As a huge John Glashan fan, I’m always impressed by a piece of hardboard and this has something of that humorous impossibility, the classic reductio al absurdum. Why, Mine may be his own kind of ‘Genius’!

I can’t sum up this show as a whole. I’m trying but I can’t get a coherent picture of it to convey to you, although aesthetically it is impressive and has effective flow and visual balance between good works of 3D and 2D and (some) video and sound. I cannot say it meets expectations set up by the title but I certainly commend Brocklehurst for her vision in organising it by using these complex philosophical approaches to seeing the world to stimulate collective practice. How easy it is to get stuck inside the world of your own giant canvases during your studio days, alone with a paintbrush. She’s grown with this project and her work will benefit. I wish more emerging artists at college and beyond would take this kind of initiative and step up into an organising role, especially women curating fellow women artists. Let’s see more of that.