London was never invaded, but London has been at war. The look of London during the Blitz and after is captured in this marvel of a picture book, Wartime London in Paintings by Suzanne Bardgett, which reminds us of the superb collections of Modern British art held at the Imperial War Museum. The IWM holds British art of the period from the early 20th century to now in Britain, second only to Tate Britain.

But Suzanne Bardgett shows us a vast range of domesticities, social life, – London unlike our current pandemic did not shut down – daily life, street life, nightlife, life in hospitals, fire fighting. There was a spectrum of weird, beautiful and terrifying light at night as London burnt. It was tumultuous and dangerous, yet some simulacrum of ‘normal’ life went on. Some 80 paintings, watercolours and drawings are reproduced, arranged chronologically, from1940 to 1945, a fascinating oblique narrative of the city during wartime. Each image has a detailed caption about the actual scene. 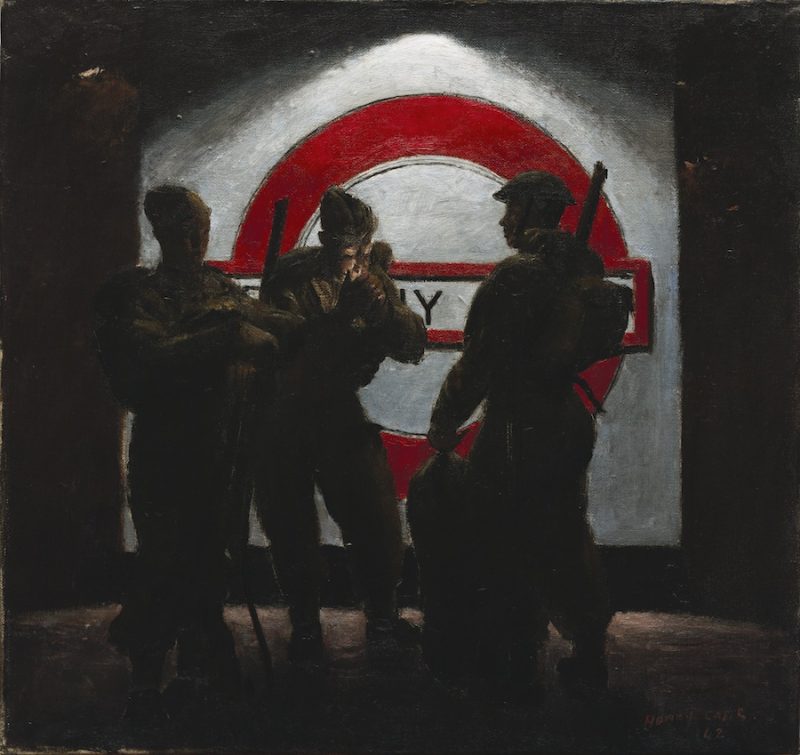 Some 6000 works of art were acquired, and of the 40 + artists on show, some are well known today, internationally or at least in Britain, from Henry Moore to Duncan Grant, Charles Ginner to Ruskin Spear, Carel Weight to Graham Sutherland. Others were absorbed by teaching, had short-lived careers, or have faded into obscurity. There is also a surprising number of women.

The commissioners of art had varied views; not quite warlike enough they noted when Charles Mozley’s elevated view of the Thames Embankment appeared, yet it is a sombre and atmospheric view, the only vivid note a double-decker red bus. And some views are overtly charming. Also from 1940, we are welcomed into Kenneth Rowntree’s painting of a diverse crowd of the military from various countries, interspersed with several uniformed nurses, girlfriends, even a family group, strolling in Hyde Park on a day in early summer, with the typical pale blue sky of the season lighting up. The scene is bookended with the scenes outside Buckingham Palace in the late afternoon of VE Day, 08 May 1945 a triptych by Leila Faithfull, where the crowd of people, all shapes, sizes and ages are seen from the back. All are shaded by the trees on the Mall as they look towards the palace where the royal family and Churchill were to appear.

In between there are vivid images of air raid shelters, street fires, destruction on an unparalleled scale – in southern Thames side boroughs perhaps only 4 in 100 houses survived – and such episodes as Carel Weight’s four-part painting of a zebra escaping from London Zoo during an air raid, pursued by its keepers down Camden High Street. There are the great railway stations almost entirely blacked out with Henry Carr’s quietly captivating scene of St Pancras Station particularly atmospheric. The Commons is on fire, and St Clement Danes and St Pauls still reign over the gloom. There is no attempt to glamorise or exaggerate. There is something heartfelt in the artistic response, a desire to show it as it was, both involved and detached—no one need to feel nostalgia for a time that was difficult at best and dreadful at worst. Nowhere in the city was untouched and this comes across in the fascinating variety of artistic response.

Art in a book is immensely beguiling, often showing us so much that is not available in real space. Great museums are libraries, with holdings of so many three dimensional objects that only a small proportion can be publicly shown at any one time. Nowhere is this more true than at the Imperial War Museum, so this knowledgeable glimpse into their wonderful collections is especially welcome.

With the easing of lockdown four IWM sites – London, the Churchill War Rooms, Duxford and IWM North – are all reopening on 01 August with the pandemic guidelines in place.

Available to order at Here