Walking into Whistler’s Woman in White exhibition, one does not know quite what to expect. After all, it is a bold choice to construct an exhibition based solely around one painting.

As one enters the exhibition, several notions are introduced at once: namely the use of the white gown in art history, the initial paintings Whistler executed of London with Hiffernan as a recognizable silhouette in some, and Hiffernan herself, in the form of a small sketch tucked away in a corner. Despite the obviously virginal implications of the white gown as an item of clothing, for example, in Sandys’ Gentle Spring, where we see a white-clad young woman as an allegory of spring, the woman in white, we as an audience has come to see, is presented in antithesis to this ideal by virtue of her wild red hair. Hiffernan’s hair is the real star of Whistler’s drawings and paintings of her, allowing her to be recognized time and time again as a figure in even the most blurry crowds. The small sketch of Hiffernan, simply titled Jo, struck me the most. There is an energy in the marks which describe the tumbling red hair, and her alert, knowing expression is captivating and contrasts with the tameness of the other “women in white” we are introduced to in this room. 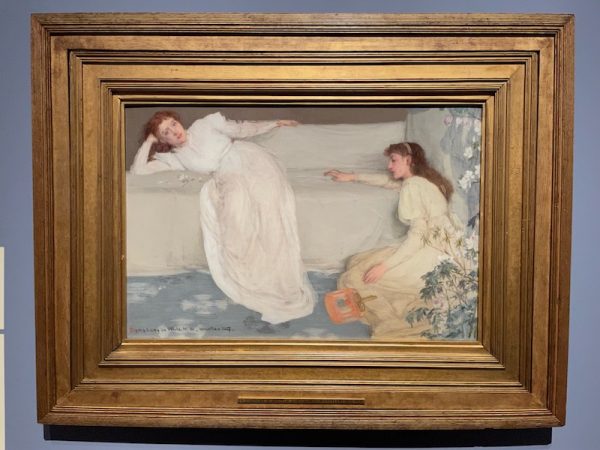 Following this introduction, we enter the room where we are presented with the three Symphonies in White, with the first one in the centre, clearly placed as the main event of the room. The sheer size of the first Symphony in White is enough to catch the eye. The other two, though more in the fashion of the time for their posed and narrative element lack the haunting quality of the first. Though an ode to the colour white may be an unusual choice, it is Hiffernan’s presence that grounds Symphony in White No. 1: The White Girl.

Here we seem to be getting to the real heart of the exhibition: the ability of the muse to inspire, enliven and as an essential part of the artwork.

We see this in the Japonisme room, where Hiffernan is just as at home in the bold colours and outfits Whistler painted in the fashion of the time. We also see this in the numerous Weary etchings, where Whistler’s true talent as an etcher come to light in the detail and softness of the fine lines of the hair and face. These etchings captivated me in the same way the small sketch, Jo, did in the first room. Perhaps it is the invitation of the small size to take a closer look and notice the tenderness of the attention to the detail of Hiffernan’s person. Hiffernan’s magnetic appeal as a muse is further evidenced in the paintings Courbet did of her. Courbet spent some time by the seaside with Hiffernan and Whistler, where he produced a beautiful portrait of Hiffernan, which he replicated several times, refusing to sell the original.

The exhibition’s final room is an ode to the impact of the Woman in White. In this collection, we see the role of the muse in bringing to life what might otherwise be a plain colour choice, and we understand Whistler’s fascination with Hiffernan. However, it is not just the choice of the colour which makes Symphony in White No. 1 a striking, lyrical and somewhat haunting painting. Hiffernan, with her long locks of red hair, Pre-Raphaletite in her beauty yet timeless, and striking yet versatile, remains the original Woman in White, irreplaceable in her role.

This is a worthwhile exhibition for anyone seeking to better understand the role of the muse for an artist and how the right muse can provide a grounding force in a brutal and rigid art world at the time.