I first encountered Winslow Homer’s work at the National Gallery in Kehinde Wiley: The Prelude where Wiley included paintings inspired by Homer’s The Herring Net and Lost on the Grand Banks. It is interesting that Wiley chose these images of white North Atlantic fishermen to continue his strategy of inserting black bodies into spaces previously reserved for white people, as, with his painting The Gulf Stream, Homer had already produced a very similar image.

In The Gulf Stream Homer shows us a solitary imperilled black man, adrift in a dismasted, rudderless boat that is threatened by sharks and a distant waterspout but who, nevertheless, remains resolute in the face of his own demise. That his boat is in the Gulf Stream and beside him in that boat are stalks of sugarcane, the growth of which led to the rise of the Atlantic slave trade, is a powerful visual reference to the Middle Passage by which enslaved people were transported without their consent to work for European and American plantation owners. Unlike Wiley, who references other of Homer’s works, artists such as Kerry James Marshall and Kara Walker have engaged directly with The Gulf Stream; Marshall transforming the image into an “allegory of liberation” by rejecting Black trauma for Black joy and Walker alluding to the catastrophe of lives lost on the Middle Passage and the absence of these tragic stories from historical accounts and depictions. 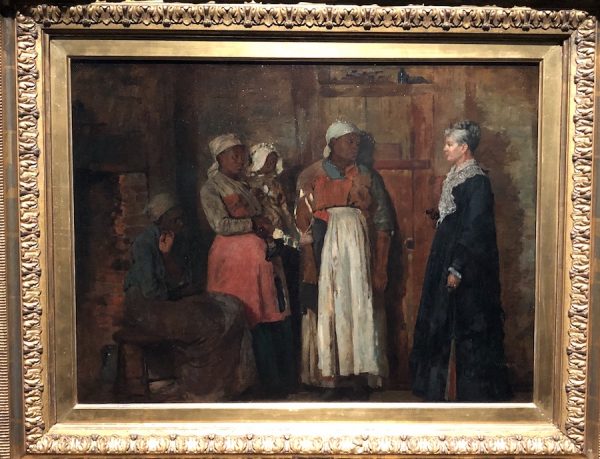 Winslow Homer A Visit From The Old Mistress 1876 Photo Artlyst

Winslow Homer: Force of Nature sets out the back story to this iconic and contested image. It is one in which Homer – from his employment by Harper’s Weekly during the Civil War to illustrate war scenes to his paintings from the Reconstruction era – insists, as Carol Strickland suggests, “on investing his images of the black community with the same realism that he displayed in painting white subjects.” Homer said that: “When you paint, try to put down exactly what you see. Whatever else you have to offer will come out anyway.” What comes out in paintings such as A Visit from the Old Mistress, The Cotton Pickers and Dressing for the Carnival, is a deep sense of the humanity of those who are either enslaved or oppressed, sometimes in clear contrast to their oppressors.

Gwendolyn DuBois Shaw, associate professor of art history at the University of Pennsylvania, has noted that it was really unusual at the time “for Homer to stake so much on Black subjects connected to Reconstruction” and that his images were “really bold, really different.” That Homer then repeats this focus on the deep humanity of those facing disadvantage within the society of his day in images of strong, defiant women, such as The Gale and Inside the Bar – works inspired by his stay in Cullercoats, on the North East coast of England – is all the more impressive.

Homer’s concern for the plight of freed slaves began during his childhood, when discussions of slavery and the abolitionist movement were very much a part of his daily life. At one point his parents attended different churches: his mother Henrietta attending a church that was abolitionist, and his father Charles attending another that was strongly against. Later, they moved to Cambridge with abolitionist Thomas Wentworth Higginson, who was also a strong supporter of women’s rights.

While his interest in the pressing issues of his time, such as conflict and race, feature strongly in his work it is the relationship between humankind and the environment expressed in restless seascapes that becomes his principal focus, reflecting both his travels around the globe and his home on the coast of Maine. 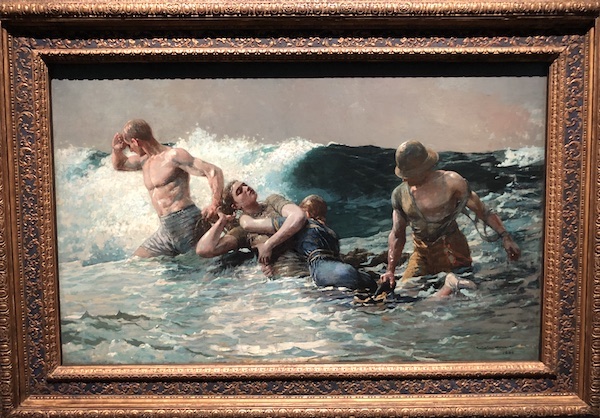 The sea takes over, so that by Winter Coast (1890), the abstract force of the raging sea overwhelms both land and canvas swamping the image and imperilling the vulnerable hunter facing wild nature. In today’s context, this is a disturbing image that connects with concerns about rising sea levels. The power of the ocean is literally overwhelming. A rather more peaceful work, although still ominous and brooding, Cape Trinity, Saquenay River, Moonlight approaches abstraction, pre-empting aspects of black paintings such as those by Ad Reinhardt. Here, we are enveloped by the night and blackened water. Another late work, Kissing the Moon, has an elegiac feel and an uneasy rapprochement between three fisherman and the ocean that is their enveloping world.

This stage of life is the time when Homer writes that he thanks the Lord for opportunities for reflection in the “dark, cold solitude of winter months.” Having become his principal subject, the power of the ocean is handled with a similar anxious appreciation to that of the fishermen and other sailors he depicts in works like Kissing the Moon.

Homer is an artist that, although a household name in America, is entirely unrepresented in UK public collections. This show therefore comes to us as a revelation of his ongoing worth and contemporary relevance.