The title ‘Making Modernism’ implies that the artists included in this Royal Academy exhibition were at the forefront of the avant-garde. That they were an essential component in breaking the boundaries of 19th-century academic art for new freedoms. They would probably be very surprised to find themselves seen thus. It has taken more than a century for their importance to be re-evaluated and appreciated. Why? Because they were women.

By focusing on ‘analytical’ self-portraits….these women explored new relationships to the making of art.

At the beginning of the 20th century, for a woman to be a serious painter (not just an accomplished ‘lady’ who painted flower arrangements and pretty views) was a near impossibility. Art schools and academies were closed to them. No dealers were interested. Those on show here did not form a coherent artistic movement. Some were friends or acquaintances. Others did not know each other. But what they did have in common was a new way of thinking about how to be both a woman and an artist. Subjects rather than objects in charge of their own artistic and emotional destinies. The exhibition focuses on the work of Paula Modersohn-Becker, Käthe Kollwitz, Gabriele Münter and Marianne Werefkin, along with works by other German women in their milieu and for whom Expressionism – as this new art was to become known – allowed for an exploration of the self. By focusing on ‘analytical’ self-portraits, where their bodies were used as maps into their psychological identities rather than as objects for the sexualised male gaze, on children, landscapes and still lives, these women explored new relationships to the making of art. In so doing, they were beginning – consciously or not – to investigate what it felt like to be alive during a time of entrenched sexual, social and colonial hierarchies, yet a time when everything was also on the brink of change.

In 1888 the conservative Kaiser Wilhelm II acceded to the Imperial throne and reigned until 1888. As a relatively new nation, he was keen that Germany should have a coherent, well-defined view of itself and that German art should remain ‘free of so-called modern directions and influences’. By this, he meant the pull of Paris and its inescapable aura of modernity. For many of these artists, the French capital was a mecca of intellectual, artistic and emotional freedom — a place where they could break free from the constrictions of bourgeois German life. The term Expressionism was one coined by the artist and President of the Berlin Secession, Lovis Corinth, to describe an exhibition of Fauvist art held in Berlin in 1911 and artists such as Gauguin and Cézanne, who had broken with Impressionism. Central to many creatives – from Stravinsky’s Rite of Spring to Picasso’s appropriation of the African mask – was a rising interest in ‘primitivism’. The belief that the child, the peasant and those from ‘far-flung’ cultures were more connected to what was ‘authentic’ and ‘real’ to their true visceral and sexual natures. The new ethnological museums in Paris, Dresden and Berlin gave access to objects that were the bounty of recent colonial plunder. Attracted by the simplicity of line and chthonic quality, most western artists were unaware that these stolen artefacts were being shown largely divorced from their spiritual or ritualistic contexts. It was in this cultural flux that Kollwitz, Modersohn-Becker, Münter and Werefkin were working. Though ‘privileged white women,’ nonetheless, they were enormously disadvantaged by their gender. Identification with the ‘otherness’ of the ‘primitive’ gave them a language that allowed for an exploration, outside the strictures of middle-class femininity, of alternative representations of both themselves and others. It’s no accident that this was the era of Freud and the nascent ‘science’ of psychoanalysis and the first rumblings of women’s rights. 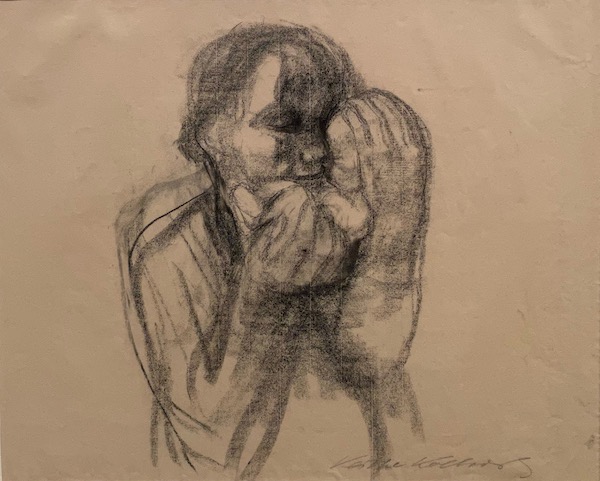 Käthe Kollwitz, Mother Pressing Her Baby to Her Face 1925

Käthe Kollwitz is the most overtly political of the artists in the show. Growing up in a vehemently socialist family, they viewed her future as a history painter (an exclusively male domain at the time). After five years of private education, she moved to Berlin, where she participated in the city’s vibrant café culture and intellectual life. In 1890 she made the decision to reject painting and embrace the graphic arts, believing that they could better carry her social and political message. At the age of 17 she met the radical young doctor Karl Kollwitz and witnessed the harsh conditions of the urban proletariat. Her two sons and members of her family acted as models for her lithographs and etchings that expressed her socialist sensibilities and led her to make print cycles such as Peasants’ War (1901-08). The results were tender, sensitive pencil drawings such as Head of a Child in Its Mother’s Hands, 1900, and the emotionally potent, black and white etching, Woman with Dead Child, 1903, in which she used herself as subject cradling her son, Peter. Peter was to die in action in 1914, and Kollwitz, haunted by the support she gave him to enlist, became a pacifist. Her visceral pencil and charcoal drawings inform her prints and sculptures; while stripped bare of ornamentation, her woodcuts combine romanticism with social realism. In a stark black-and-white self-portrait from 1924, she might be posing as the model for Bertold Brecht’s Mother Courage.

Gabriele Münter is perhaps best known – as so many women of that period were – for her relationship with a man. In this case, Kandinsky. Born to German parents in the USA, where she lived during her early years, her family later returned to Germany. The premature death of her father left her independently wealthy, a position unfamiliar to many other of these female artists, such as Modersohn-Becker. After a summer spent working alongside Kandinsky, Marianne Werefkin and Alexei Jawlensky Kollwitz, Münter wrote: ‘All at once it ‘clicked’ and I felt liberated.’ Heavy impasto, applied with short brush strokes, gave way to fluid, swiftly applied paint that created bolder, flatter compositions. Colour was used to reflect her inner world. Her paintings of Kandinsky sitting at a table and Paul Klee in an armchair abandon graphic ‘likeness’ for atmosphere and mood.

Born into an aristocratic family in Moscow, Marianne Werefkin studied realist painting at the Moscow School of Painting, Sculpture and Architecture. A move, with her father, after her mother’s death, to St. Petersburg, where the academies were closed to women, led her to take private lessons and make connections with the city’s intelligentsia. During an unconventional relationship with the young painter Alexei Jawlensky, whose career she promoted, her own work took a back seat for a number of years. In her diary, she wrote, ‘I am not a man, I am not a woman, I am myself…. Being an artist does not mean possessing a faculty of combing lines and paints…but having a world inside oneself and individual forms to express it’. A meeting with the dancer Alexander Sacharoff led to a portrait, in 1909, of sweeping, stylised lines that reflected the current Japanese influence. With its simplified tonalities and mask-like face turned away like a geisha’s from a clutched flower, there’s more than an echo, here of Puccini’s Madame Butterfly, which premiered at La Scala in 1904. 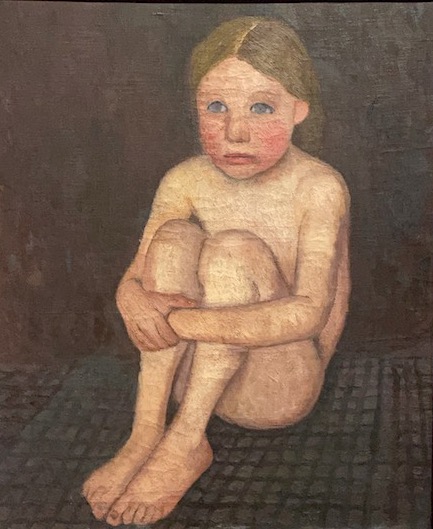 But it’s Paula Modersohn-Becker who declares herself as the most avant-garde and innovatory of the painters in this exhibition. During the research for my novel, Girl in White – based on her life – I went to Worpswede on the north German moors to visit what had been the artists’ community to which she had attached herself. There she met the poet Rilke and Otto Modersohn, an academic painter ten years older than her, who would become her husband. It would be there, too, that she would find her soul, even if it were one that was constantly pulled towards the modernity of Paris. Unlike other artists in this group, Paula had no independent means and struggled to make a way for herself, breaking many of the social codes expected of a young bourgeois German woman at the time. Her approach was daring, determined and brave when, after marrying Otto Modersohn and feeling emotionally and artistically smothered, she left without funds to live and study in Paris. In her diary, she wrote, ‘To strive for the greatest simplicity by means of the most intimate observation. This is greatness.’ This show includes some wonderful paintings such as Seated Nude Girl, Her Legs Pulled Up, 1904 and Portrait of an Italian Girl, 1906. Here, the children are not romanticised but painted in their vulnerable essence, so unlike later clichés of round-eyed, tearful urchins sold to tourists by street artists in Montmartre. Other of her paintings are visceral, tactile, closely cropped compositions. One focuses on a small child in a red dress fiercely clutching a struggling cat. (We do not see the girl’s face, everything is said in the force of her clenched arm), another zooms in on a baby’s head suckling at its mother’s breast, taken from Paula’s daily observations of Worpswede peasants. Influenced by the progressive ideas on education by the French philosopher Jean-Jacques Rousseau, this was the era of the child. With their matt surfaces, their textured paint and tonal compositions, Modersohn-Becker’s paintings are exercises not only in innovative ways to handle her medium but in empathy, compassion and new ways of seeing. Dead at the age of 32 from an embolism, six weeks after the birth of her daughter, one cannot help but wonder what she might have become had she lived for another 30 years.

Among the works of artists that make up the main focus of this show are those by artists such as Erma Bossi and a beautiful, intense (and, for the time, daring) study of a young girl, Beta Naked, by Otilie Reylaender, who also spent time in Worpswede. It has taken more than a century to acknowledge what these women brought to Modernism. To accept how the masculinised gaze of Gauguin and Picasso was given an alternative focus in these radical self-portraits and nudes that explore intimacy and self-hood from the inside out. Despite the many personal difficulties faced – grief, poverty and rejection – this exhibition re-evaluates (and not before time) the role of these female artists to create a (necessarily) revisionist history of Modernism. 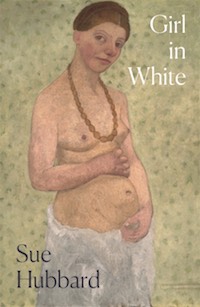 Sue Hubbard is a freelance art critic, award-winning poet and novelist Her novel, Girl in White, on the life of Paula Modersohn Becker, is available from www.pushkinpress.com. ‘A moving and rare, heart-warming take on Paula-Modersohn-Becker’s life’ – Sir Nicholas Serota. Head of the Arts Council and previous director of Tate.

Sue Hubbard will be giving a reading and talk on Girl in White at Hansard Studio on 6th December.