Day One Frieze LA: Rain! Some things are just out of our control. This was torrential rain, sheets of water like you see in the tropics. I thought it could be mudslide time for the Silver Lake house we were staying at but magically the water drained off and the sun came out as the fair opened and it was almost dry for the rest of the opening day. Lots of unused pink umbrellas in racks. Frieze Los Angeles is a brand new annual contemporary art fair, which presents 70 established and emerging galleries, almost half the galleries are from L.A., the rest from New York, Europe, Asia and Mexico. Alongside is a site-specific program of talks, music and commissioned artist projects.

Frieze LA has turned out to exceed all of my expectations of the modern art fair. This year the project space was chosen by independent curator Ali Subotnick who has creatively utilised the back lot sets of New York and Chicago at Paramount Studios to create a three-dimensional experience like VR without the VR. The masterstroke of holding the fair in the Art Deco studio will be ingrained in collectors’ memories for many years to come. Bettina Korek Executive Director, Frieze Los Angeles has really done a service to change the way many will perceive an art fair in the future. 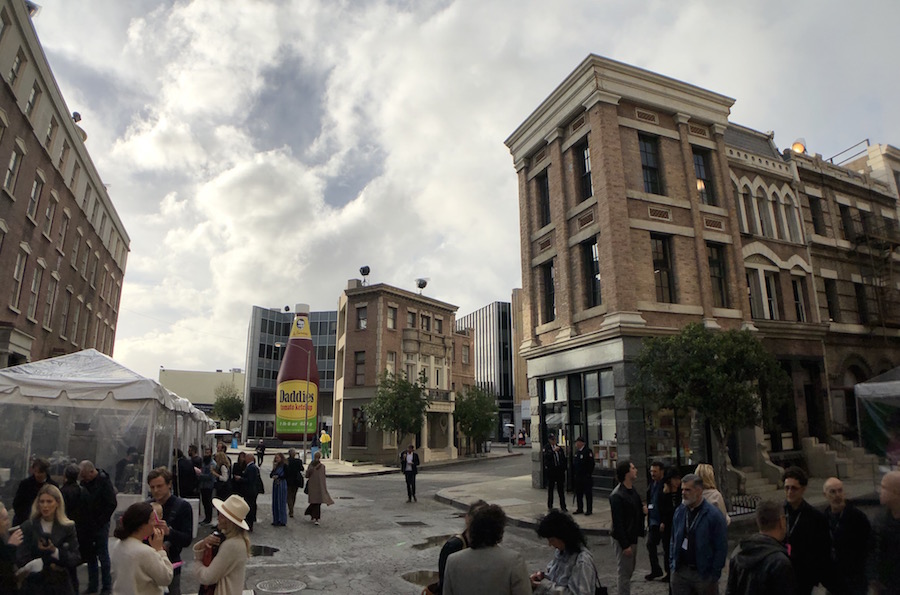 Invited Project artists included Lisa Anne Auerbach, Sarah Cain, Catharine Czudej, Karon Davis, Cayetano Ferrer, Hannah Greely, Trulee Hall, Patrick Jackson, Barbara Kruger, Paul McCarthy, Kori Newkirk, and Tino Sehgal who created a performance which used the Upper East Side set to create a constructed situation. This is Competition, explores the commercial activity of an art fair, as two gallerists compete to sell a work by the great Tino Sehgal. Over to the other side of the square, Paul McCarthy has installed an inflatable sculpture of a Daddies ketchup bottle. Far less controversial than his Paris butt plug. 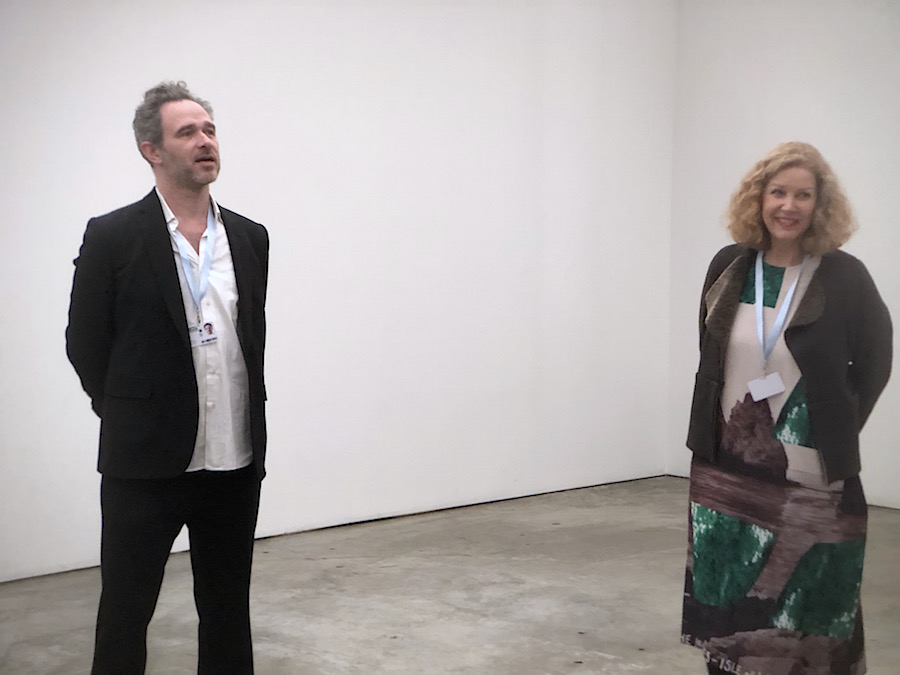 Tino Sehgal ‘This is Competition’

The fair itself was much smaller than NY and London but the quality as always was paramount (no pun intended). Here are a few snaps of notable booth/stands at the fair. 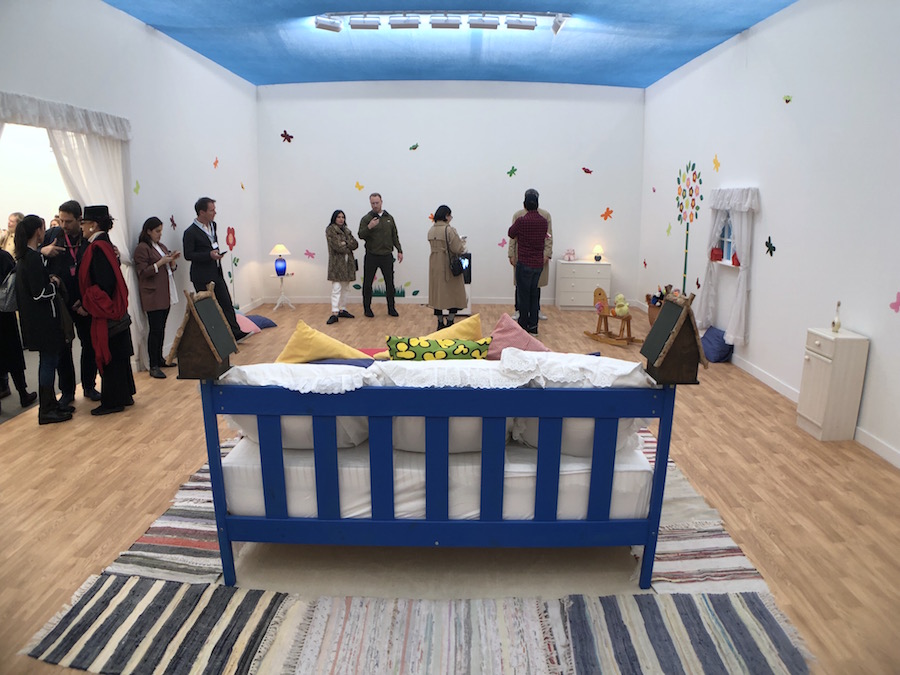 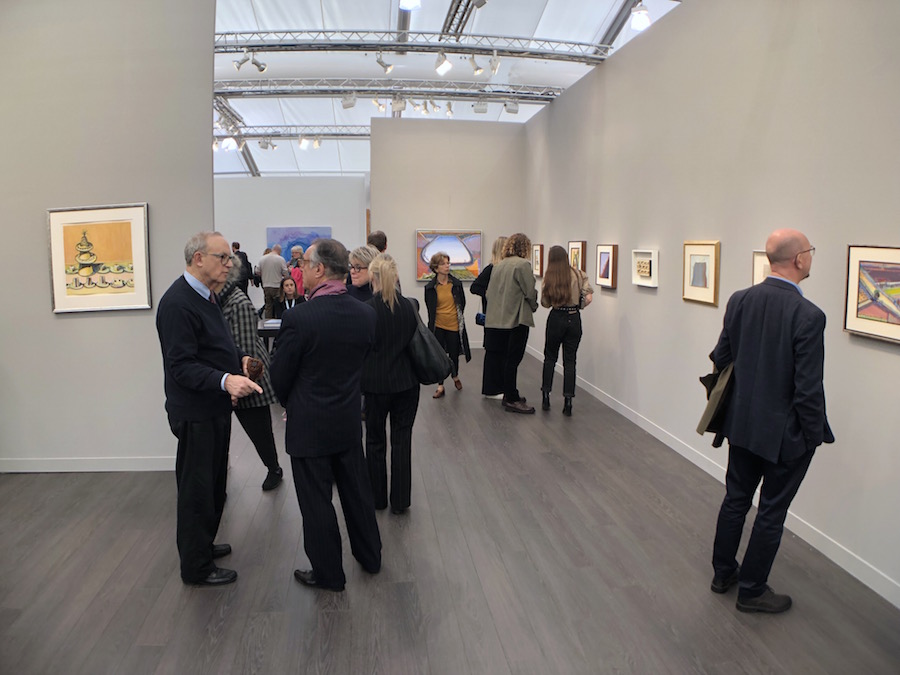 Thiebaud has lived and worked in California for his entire career, Aquavella Galleries 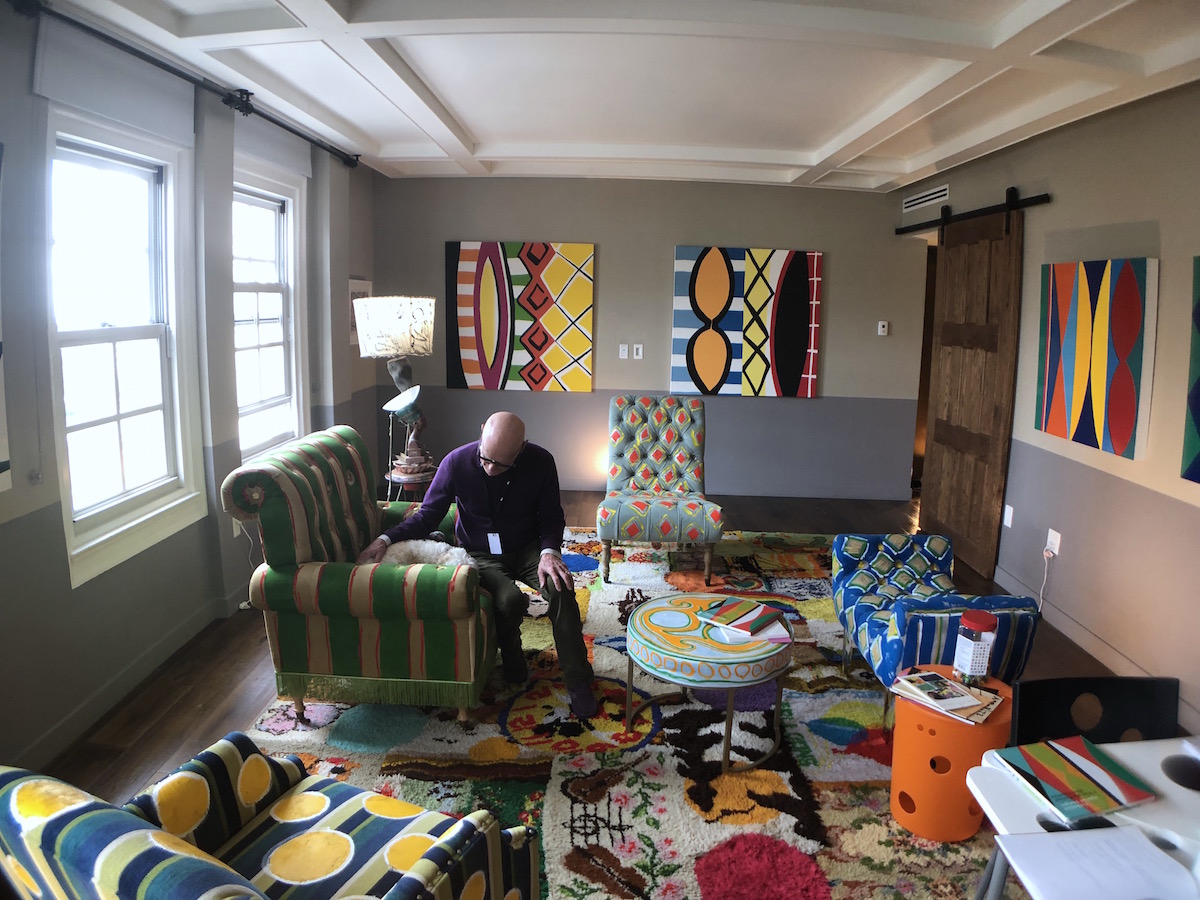 Thomas Soloman at Kim MacConnell, The Feliix, The Roosevelt Hotel

Like a Bloomsbury Group interior, Soloman weaves together patterns and vibrant colours to produce a sumptuous painterly room setting. Another dealer of note was Nino Mier showing a solo show of Berlin-born artist Andre Butzer

Day Two: I went over to The Felix art fair at the Hollywood Roosevelt Hotel. This again was an interesting use of space. The penthouse and the 11th floor were transformed into gallery spaces adapting the sombre grey painted walls and dark wood floors to create a perfect setting for domestic scale artworks. 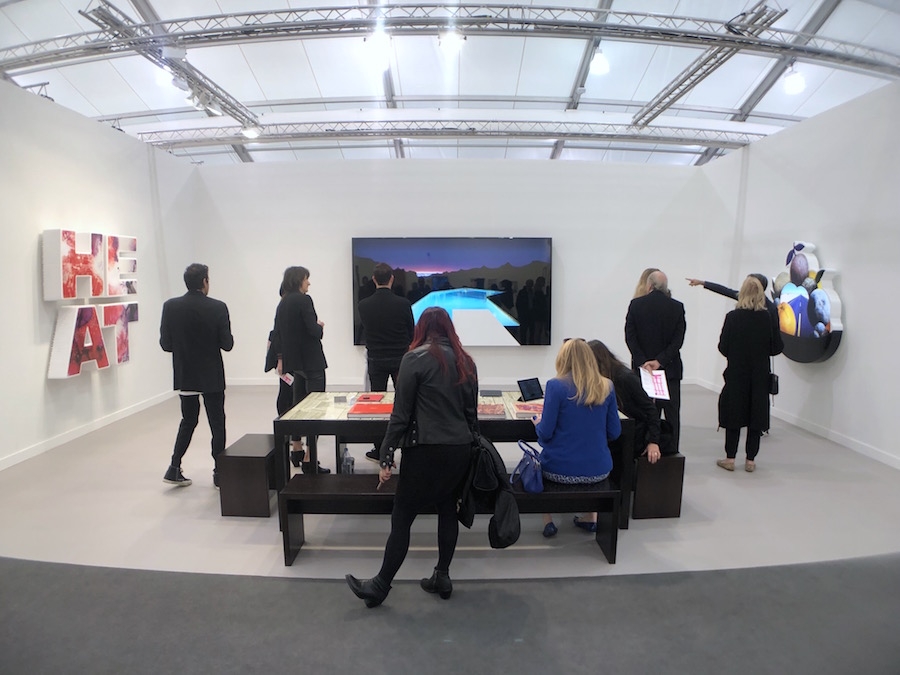 Doug Aitken is widely known for his innovative fine art installations. Utilizing a wide array of artistic approaches, Aitken’s eye leads us into a world where time, space, and memory are fluid concepts. 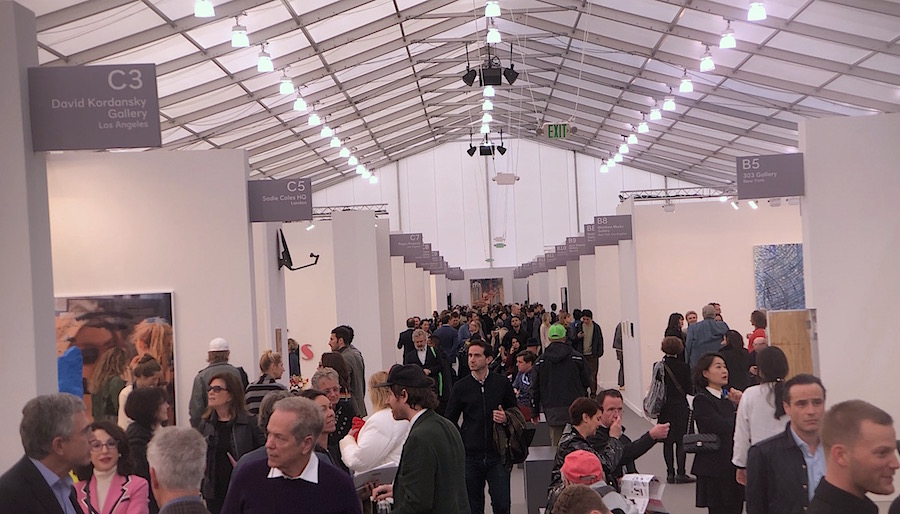 Back to Frieze in the afternoon more rain. This time the pink umbrellas were nowhere to be found. I watched a couple of ladies, with a bit of work, walk down the road to their UBER carrying two of them, as I came in. Problem is it’s not only damp but cold as well. Wearing my London Winter gear, this is unexpected. The fair today seemed less crowded and I could actually see the wood for the trees. 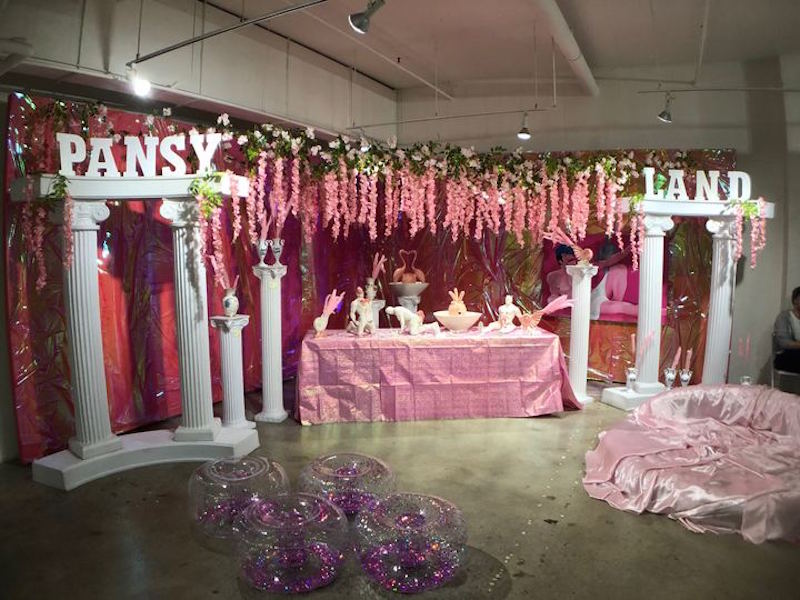 Off to Superfine an open, transparent, fair, which addresses inclusivity especially the LGBTQ art market. To a city that has both the economics and the artistic clout to support a leading emerging art fair for many years to come. The fair provides an opportunity to both solo artists and galleries focused on emerging talent from LA and beyond. Stands of note Pansy Land (Pansy Ass Ceramics Toronto) and BBAM! Montreal featuring paintings by Carylann Loeppky. 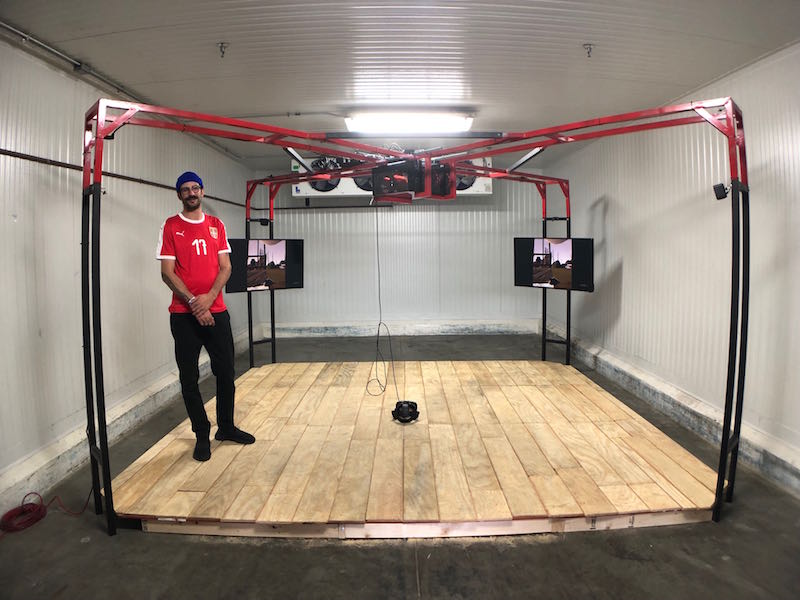 Paid a visit to Springbreak an artist-led fair in a disused industrial estate. This one reminded me of the Qpark shows in London and had several artists of note including David Bratton and Kiki Johnson whose tumble weed installation was overpowering and filled the space remarkably. Also, Filip Kostic at Hunter Saw Fine Art produced one of the best VR installations I have ever seen. Titled Landgrab The Musical it created a wild west lonesome cowboy vibe with music and visuals created by the artist. 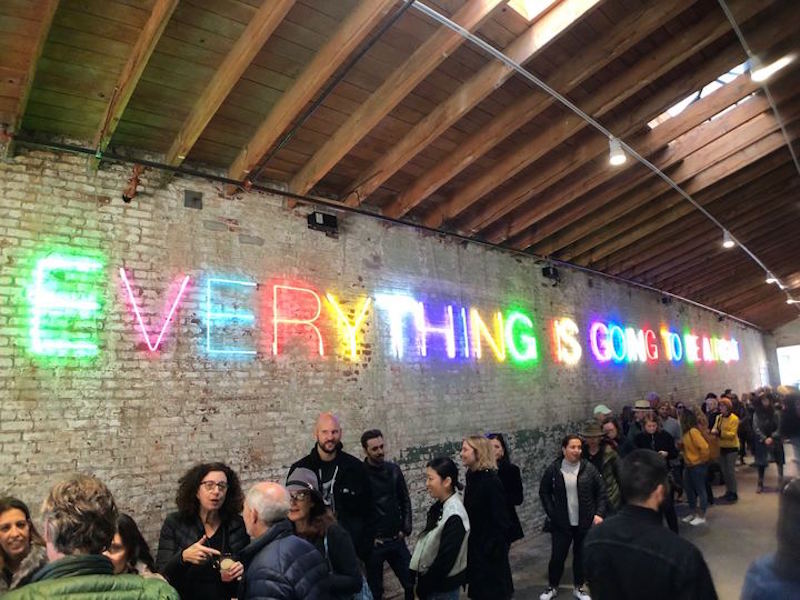 Made my way down to see Annie Leibovitz at Hauser & Wirth’s impressive LA Gallery but the queue was so big it stretched around the block so here is a picture of the queue under a neon work by Martin Creed. 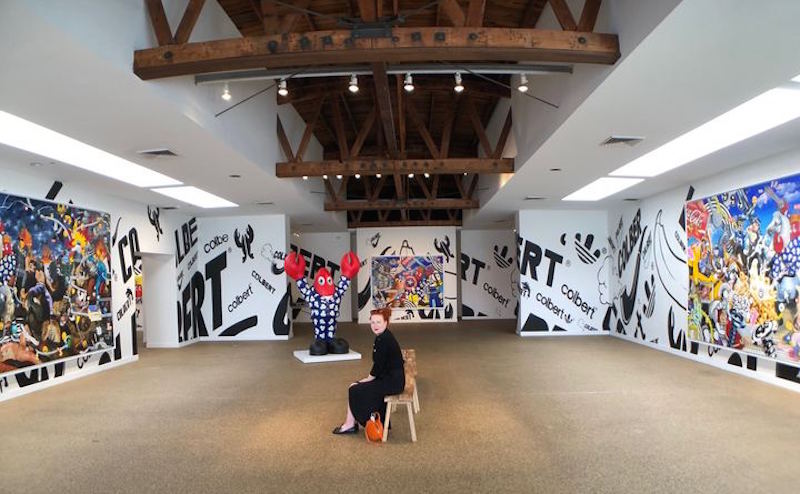 Stopped into London based artist Philip Colbert’s pop-up exhibition at Saatchi Gallery mounted by Unit London. This Post Pop display includes quality painting sculpture and video from an artist who is going places. 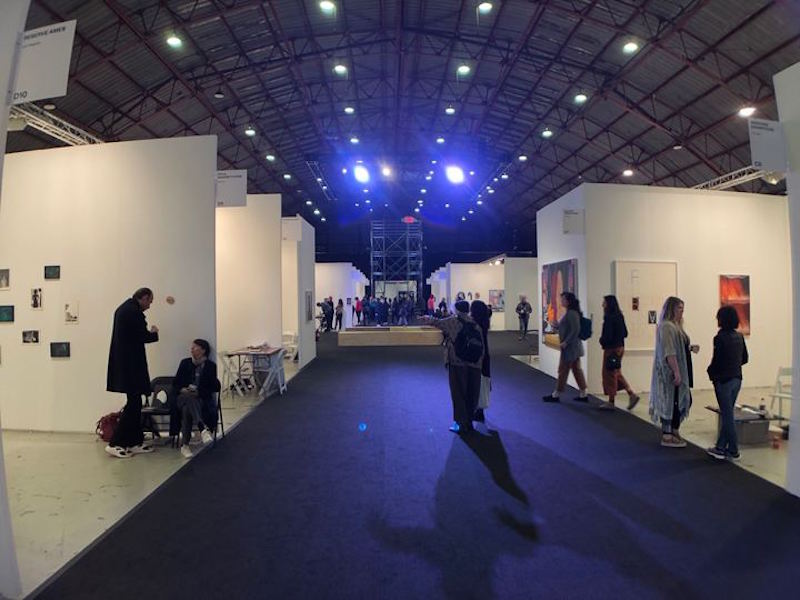 Last but not least was ALAC a midsize fair in Santa Monica which has been a bit overshadowed by Frieze. Worth a look in if only to see a few London art galleries who made the effort to fly their goods to the west coast for what could have been a washout with torrential rains and wind.

Off to Palm Springs for Modernism Week report to follow