The word ‘aesthetics’ is derived from the Greek word meaning perception or sensation. The Scottish philosopher David Hume spoke of the refinement of (educated) taste. He, like Kant, believed that some artworks were better than others. But, while Hume spoke of ‘taste’, Kant was more concerned with ‘beauty’ – a difficult, slippery category for us postmoderns. For Kant, this meant emotions, intellect and imagination being stimulated by a sensuous object. Clive Bell furthered this thinking when he emphasised that what mattered in an artwork was ‘Significant Form’ rather than context and, by the time we reach Clement Greenberg, the definition of what made a good painting was that the astute viewer was able to appreciate its flatness, to understand that the painting’s surface was simply an arena for paint to explore the grammar of paint.

By the 1960s definitions of what made art ‘art’, had been broken wide open

In 1967, Richard Long a young Bristol artist made a line in the grass of a field by walking backwards and forwards and called it A LINE MADE BY WALKING. Barely visible, it was an ephemeral track worn by his boots in the grass. How could such a transient thing, if ‘thing’ it even was, be considered art? And yet didn’t this simple act encompass everything that art needs? Spare beauty. Metaphor and history. 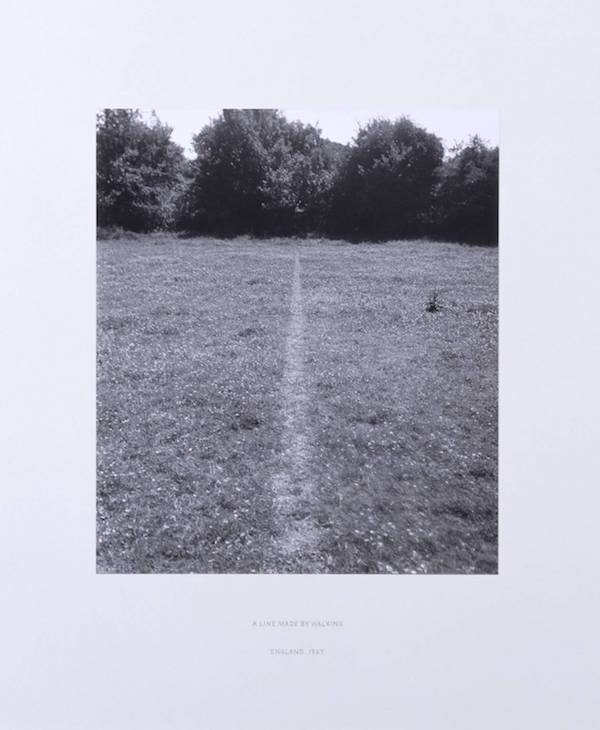 The beauty bit is easy. Any sensitive eye can discern the change in colour of the crushed grass, against that which surrounds it, can feel a sense of satisfaction at the trueness of the line. But metaphor and history? Well, to understand that we need to look outside the narrow confines of European art history. Such a line as Long made in the grass that day is an archetypal human mark. A record and trace of a journey, even a short one. A mapping point between A and B. It designates departure, experience, change and return. Like Odysseus setting out for home from Troy after the Trojan war, we are all changed by the journeys we undertake, be they physical or emotional. Odysseus’ journey is a metaphor for the human capacity to endure the unknown. To live by trust and inner strength. It stands for the universal journey that we all take, great or small, from birth to death. The symbolism is no less powerful in Richard Long’s line because the journey is a short, traced across a field. A journey of a thousand miles starts with one step.
The power of the journey, or at the least of the walk and the traces that it leaves, has been understood for years by the Aboriginal people who, though their Dreamtimes developed complex animist narratives that incorporated rocks, creeks and mounds into their internal creation myths. Not only do the timelines that they create on their walks through the outback ceremonially map the landscape through which they travel, but the very process is a mystical, transformative experience. The one who sets out is not the same as the one who arrives. As Eliot reminds us in his poem Little Gidding “And the end of all our exploring/Will be to arrive where we started/And know the place for the first time”.

This path is known for the Zen Buddhist as the mushin or the Heavenly Way. While Christian’s journey in Bunyan’s Pilgrim’s Progress and the sacred ways of Santiago de Compostela or the English Bede’s Way – which follows the route of Europe’s most venerated early medieval scholar, the Venerable Bede – all assume that the pilgrim/traveller will be changed by the experience. In Richard Long’s case, he created a virgin track. One undesignated and untrodden previously by others. His is a record of his particular walking body, moving through time like a sundial or a pendulum, backwards and forwards across an ordinary English field. Yet, as with a photograph, what is left with is the trace, the memory of the experience. It’s not the experience itself. We do not see him tramping his way across the field. The line etched in the grass embodies the history of his movement like the ancient tracks of a thousand herders and their animals found in the Pyrenees and Himalayas that mark the migration of men and flocks over hundreds of generations.

For an artist, the creation of an artwork is a journey. They set out often, not knowing exactly what route they will take. Surprised by the twists and turns along the way, both dispassionate observer yet embedded inside the very process.

Richard Long has said that places give him the energy for ideas. Like the great walker poets Samuel Taylor Coleridge, Wordsworth and John Clare he understands that the body moving through nature has a different awareness gleans different truths to one that is static. For the poet, the poem is made up of meter, rhythm and feet that emulate human movement. For Long, his works reflect the dimensions of the body. The span of his stride, how many steps it takes to cover a particular distance.
Classical landscape painting used the natural world as a stage, a commodity, but for Long the natural world is something of which he is an integral part, something with which he interacts through touch, walking and looking. Subject and object, viewer and landscape meld to become homogeneous. He may move a few stones, arrange a few sticks, but nothing didactic here, nothing arch and ironic, simply an invitation for us to slow down, look and respond from the deepest recesses of ourselves. What he creates are stopping points, similar to wayside shrines along those ancient pilgrim paths that give space for moments of reflection and contemplation. This sense of mindful awareness, of placing one foot in front of the other, of the inhaling and exhaling of breath, is comparable to the conscious meditations of the yogic traditions.

From making A LINE MADE BY WALKING Richard Long has continued to make work embedded in the natural world. He has built stone circles, painted with Avon mud and created texts based on the distance covered by his walks. He takes nothing more sophisticated with him than a length of string with which to make circles, a camera for records, paper and a pencil. He has made work in Dorset and Ireland, on Dartmoor and as far afield as the Sahara and Texas. Yet the process is essentially the same. To walk, to look, to experience and record with minimal intervention and disruption. To quote from a Japanese Noh play, “uncertain the journey’s end, our destination; uncertain too, the place from whence we came.” In the time of a pandemic, we would do well to look again at Richard Long’s apparently simple A LINE MADE BY WALKING. We may learn a lot from this elemental, chthonic work.

Sue Hubbard is a freelance art critic, novelist and award-winning poet. Her latest novel Rainsongs is published by Duckworth. Her fourth poetry collection is due from Salmon Press later this year.
www.suehubbard.com