Picked By Paul Black – With Anselm Kiefer’s ambitious new exhibition, Paul Nash At Tate Britain, Picasso at the NPG, and Georgia O’Keeffe, and Mona Hatoum at Tate Modern, there have been the usual requisite blockbusters to attend during 2016, even though Kiefer’s show is in the purview of the private gallery, unlike the greater majority of London blockbusters. But these are – to be frank – also rather easy and obvious choices. So let us delve a little deeper, and at times a little farther afield, into some of the less obvious but equally essential exhibitions of 2016.

2016 saw NY artist Michael Joo create a series of ‘caloric paintings’, the artist gauged the number of calories individuals would expend performing various actions – a level of conceptuality to really get your teeth into – using silver nitrate on canvas, the artist juxtaposed form, substance, and action to create his version of painting, in a way that only Michael Joo could. ‘Radiohalo’ felt like a departure for the artist, heading ever-more into the relationship between the performative and the artefact. In this impressive show, Joo transformed the nature of the canvas, blurring definitions and confounding traditional expectations. The artist’s sophisticated practice continued to operate metaphysically, alchemically, poetically, and conceptually (not to mention, synthetically and politically), exploring the boundaries of human identity and the body – given form and potential meaning via process, time, and action. In 2016 Joo’s work remained a fascinating and complex journey for the viewer. 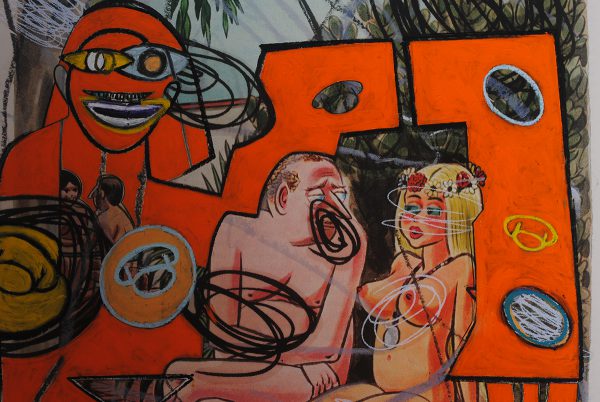 Earlier this year, Richard Prince presented us with a series of tawdry cartoons at Sadie Coles HQ but they were not his own – of course. The controversial master of appropriating images has also spent a career appropriating text; this also includes the use of jokes and one-liners: according to the artist, the art of the joke is in the ‘Re-telling’. This is apt considering that Prince is the inventor of ‘Re-photography’, the act of photographing other people’s photographs, re-cropping them, and in doing so, recontextualising the image. The seductive quality of the primary image is rendered meaningless in its reproduction, forming works of hyperrealism; Prince loses us in a copy of a copy. The work is the artist’s version of Pop Art, taking images from popular culture and creating a form of simulacrum – and with that Prince got the last laugh, not to mention the occasional lawsuit. 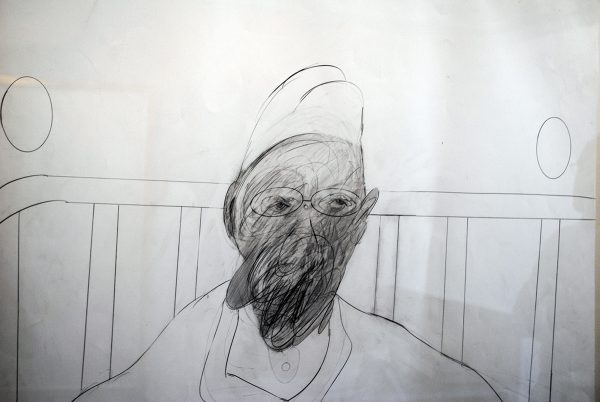 We all like art that sparks debate? Well, in 2016 the Herrick Gallery, London presented a selection of drawings purportedly by the great British painter Francis Bacon, which stirred much controversy. The works were lent by Cristiano Lovatelli Ravarino to David Edwards, the brother of John Edwards, to whom Bacon left everything when the artist died in 1992. These works were then juxtaposed with new paintings by Darren Coffield. But the eight pencil & graphite drawings and two pastel collages said to be by Bacon, had their authenticity contested after previous drawings attributed to the artist were rejected as fakes by Martin Harrison, the author of the catalogue raisonné of Bacon paintings, undertaken for the Francis Bacon Estate. Whatever your opinion, this exhibition was a fascinating look at what might have been. 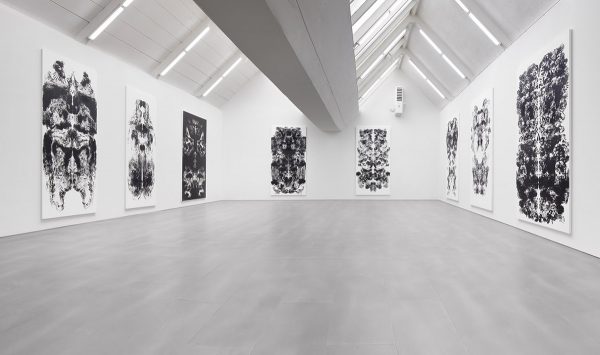 Mark Wallinger played with the recurrent motifs of the self and its examination in ID at Hauser & Wirth this year, a thoroughly playful journey through subjective identity: and the artist had great fun with it. Not least with Wallinger’s body of work, the id Paintings. The artist, in part driven by the ‘pleasure principle’ of the id, created a series of large-scale paintings based on Rorschach test imagery. But instead of creating these works via over-sized inkblots – or recreating these forms in a traditional manner with a brush – Wallinger created the works using his bare hands. In this series by the artist, man is at its centre of the work in perpetual self-reflexivity, as we ruminated over our own identity crisis’. This was Wallinger at his best, sharp, simple, and playful – as he put the viewer under analysis. 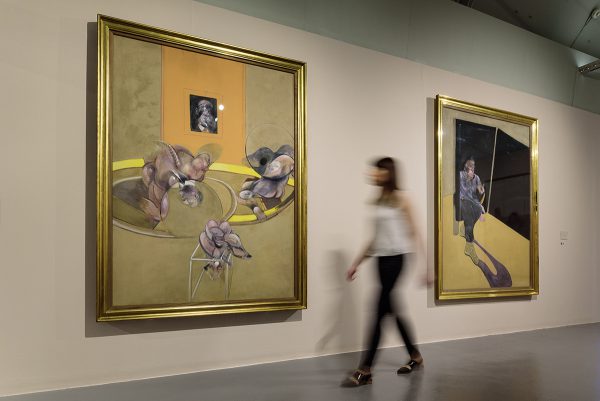 This was also the year that Tate Liverpool presented the largest exhibition ever staged in the north of England of the late-great existential master of the 20th century: yes Francis Bacon, featuring approximately 30 paintings by the artist alongside a group of rarely seen drawings on paper – but more significantly the exhibition turned out to be a survey of a particular painting device employed by the artist – Bacon’s space-frames took centre stage. The curatorial decisions made in this exhibition highlighted the artist’s Godless architecture. With all of the myth surrounding Bacon as an instinctive painter, immediate and visceral – from the existential angst of the 50’s to what is sometimes described as almost the self-parody of the artist’s final works – it turned out that the real existential horror of Bacon’s environments was never really to be found in the artist’s renditions of screaming haunted meat, but in the voids surrounding them. 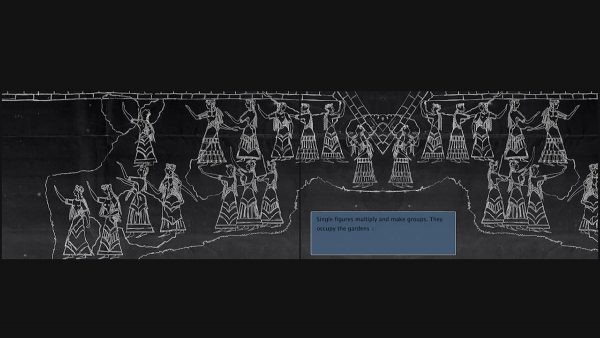 Elizabeth Price’s ‘A Restoration’ employed the Ashmolean Museum’s photographic and graphic archives, utilising the records of Arthur Evans’s excavation of the Cretan city of Knossosto to create an eighteen-minute-long, dual-screen digital video, for her 2016 installation at the acclaimed museum. This piece was in fact simultaneously video and installation – but with more of a filmic narrative than an installational one – yet the work remained utterly immersive for the viewer. The filmic installation reflected on a ‘pause’ in the narrative journey of the object, one which was not the end that we perceive. The artefact had not reached its conclusion trapped in some dusty vitrine. But all objects were in fact destined for destruction, and the narrative journey of the artefact was merely delayed, sitting in a museum display. This was not the end of the journey… The solace the viewer found in viewing objects from, say, the destruction of Pompeii – that ‘we’ had survived all of ‘that’, it’s the end of the story of these objects, and we’re safe – was false. Everything would instead slip from the shelf. Everything would break. Including Price’s very work itself. This was nothing less than an art-blockbuster from Price which was not to be missed. 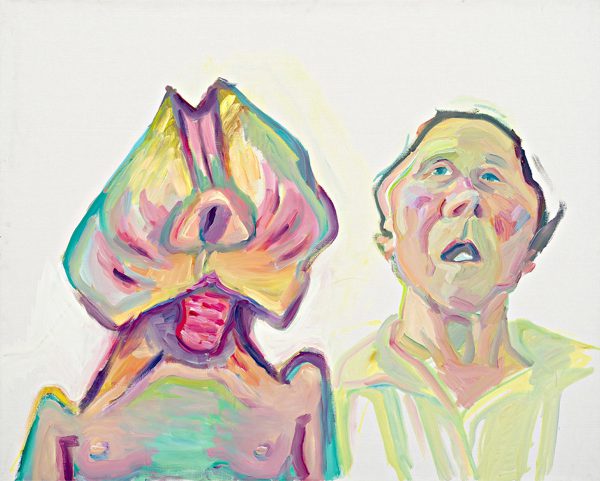 Tate Liverpool presented the first UK retrospective of late Austrian artist Maria Lassnig, featuring 40 large-scale paintings, the exhibition spanned Lassnig’s entire career; from the 1940s in Vienna right up to paintings made in the final years of the artist’s life. Lassnig created what could be seen as a singular lifelong oeuvre of work consisting of expressive, brightly coloured oil paintings with the human figure, using herself as subject matter. This was art as an undeniable reminder of the mortality of existence, but unlike the Gallery’s presentation of Bacon this year, there were no tortured visceral forms or screaming popes trapped in the emptiness of a Baconian void. Instead, this exhibition presented the insipid decline of the artist, reflective, honest, and stark. 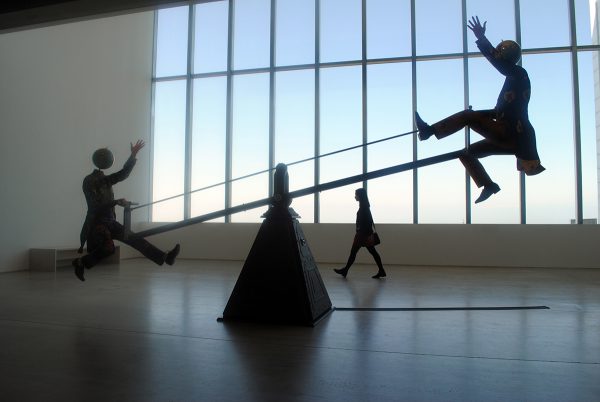 In 2016 Artlyst travelled to sunny Margate and Turner Contemporary’s Sunley Gallery to view two major works by leading contemporary artist Yinka Shonibare MBE, and was met with the sight of the artist’s first work on display; ‘The British Library’ consisting of shelves of books, with sleeves made out of Shonibare’s trademark colourful wax fabrics, their spines bearing the names of immigrants who had in fact enriched British culture. The artist’s trademark colours were also unveiled in the form of two figures dressed in the artist’s bright and patterned fabrics, each figure balanced in opposite positions on a Victorian steam-punk seesaw – a signifier of an empire-building industrial revolution. Atop the shoulders of both figures rested their globe-heads, highlighting the countries involved in the First World War. Both works were a reflection on social displacement, a rebuke to those who fear immigration, social change, and a poignant reminder of how cultures evolve.

On a return to Turner Contemporary, the great power of the ocean was ever-present in John Akomfrah’s video installation ‘Vertigo Sea’, a bold meditation, as sound swells like the sea itself, images of natural wonder and beauty give way to archival horror, as whale blood and blubber stains multiple screens, the deep blue waters, and our collective conscience. In turn, these were replaced by the images of watchful figures: the artist’s witnesses to the myriad of unfolding events amidst the swirling waters of Akomfrah’s moving triptych. This work mesmerised in much the same way as Elizabeth Price’s ‘A Restoration’, and drew the viewer in, becoming all encompassing as waves rolled, and sailors danced – grainy footage juxtaposed with vibrant ocean colours – such colours that could be found as inspiration in the surrounding works of the great JMW Turner, whose influence on Akomfrah was as ever-present and timeless as the oceans themselves. 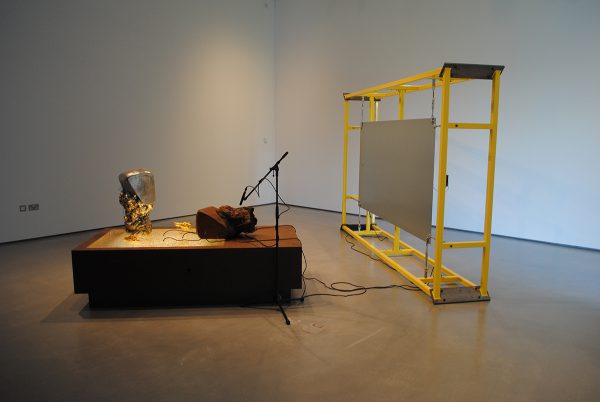 2016 saw the very first prize in the UK to celebrate sculptural practice as a solitary discipline, the award recognised a British or UK-based artist of any age, at any stage in their career, who had made a significant contribution to the development of contemporary sculpture. The nominated artists presented a refreshing display of the varying languages of the sculptural form – Phyllida Barlow, Steven Claydon, Helen Marten and the wonderful David Medalla – were nominated, with this year’s Turner Prize winner Helen Marten taking the £30,000 prize. The show truly represented the vertiginous nature of language in the history sculpture: conceptually complex and multilayered works, traditional responses to space, and site-specificity; dialectics concerning installation and the body, the poetry of form and narrative, even the monumental. In a sense, the exhibition should have won for the best-curated exploration of language in sculpture. 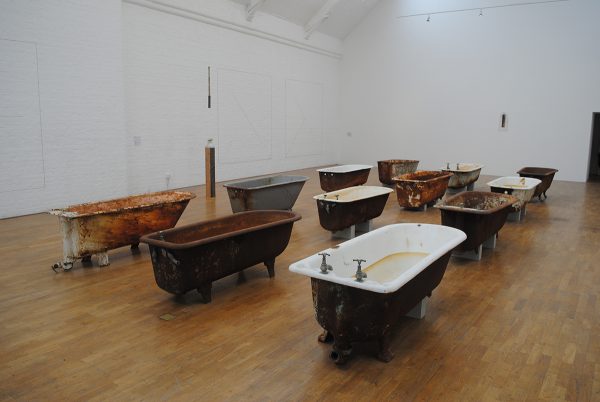 2016 saw Modern Art Oxford celebrate 50 years as an internationally acclaimed gallery with KALEIDOSCOPE, a year-long series of ambitious interlinking exhibitions, reflecting on some of the great moments in Modern Art Oxford’s history, this included works from Marina Abramović, Kevin Beasley, Njideka Akunyili Crosby, Douglas Gordon, Dan Graham, Hans Haacke, Pierre Huyghe, Iman Issa, John Latham, Louise Lawler, Sol LeWitt, Maria Loboda, Richard Long, Gustav Metzger, Gareth Nyandoro, Yoko Ono, Hardeep Pandhal, Elizabeth Price, Guan Xiao and many others. The preoccupation of many artists works displayed from that history was – almost inevitably – the body, but often as a reflection of the temporal over that of identity. A fitting curatorial choice reflecting the nature of longevity, which included 50 years of the gallery itself. This was a curatorial powerhouse of a journey as iconic works from the past returned to the gallery from across the globe. 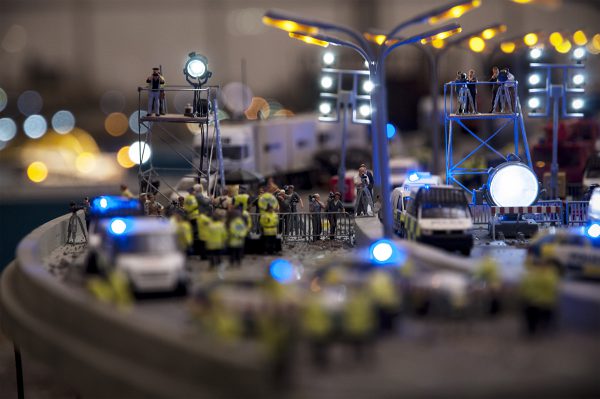 This year Jimmy Cauty presented the viewer with a miniature post-riot landscape of blue flashing lights and graffiti-strewn crumbling concrete – housed in a 40ft shipping container – which could be viewed through a myriad of peepholes. The work was then sent on a pilgrimage to riot sites where significant civil unrest had occurred in the history of our country – a tour rather apt in its timing – it was tempting to see the work as a romanticism of social disorder, a quiet call-to-arms – even though the press release explicitly denied this. There seemed something voyeuristic and delicious about the surreptitious nature of viewing the work, with that denial not helped by the viewers glee in viewing all the ‘diddy carnage’, as the tiny figure of a copper wiped ‘fucking…’ graffiti from the crumbling ruins. Perhaps it was a sly call-to-action after all, one that we all hold in our hearts but socially deny, the desire to tear something down, and regain control from a ‘nanny-turning-totalitarian’ state.