Bloomberg New Contemporaries which has recently opened their 2019 edition at Leeds Art Gallery is a must-see exhibition for those trying to keep their finger on the pulse of the emerging art emanating from the UK’s top art colleges.

New Contemporaries has given a platform to generations of emerging artists. Since 1949, New Contemporaries has been illuminating for the first time a cross-section of the most internationally renowned artists of recent history including post-war figures Frank Auerbach and Paula Rego ; pop artists Patrick Caulfield and David Hockney ; new media pioneers Derek Jarman and Helen Chadwick, YBAs Damien Hirst and Gillian Wearing; alongside contemporary figures such as Tacita Dean, Mark Lecky, Mona Hatoum, Mike Nelson and Chris Ofili; and more recently a new generation of exceptional artists including Ed Atkins, Monster Chetwynd, Rachel Maclean and Laure Prouvost. 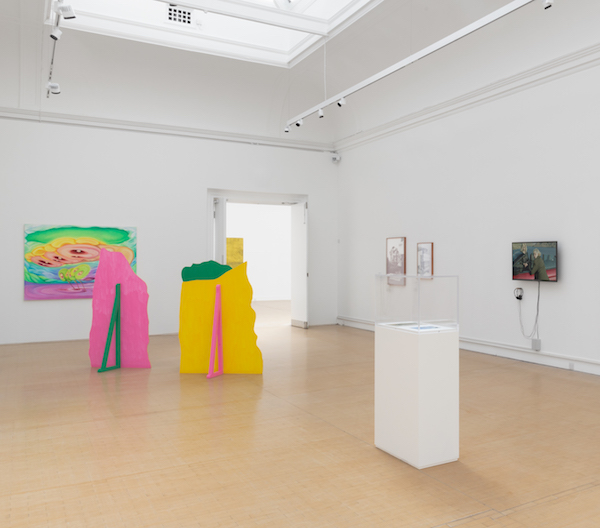 The exhibition features 45 of the UK’s most influential young artists emerging from arts education around the country. Themes addressed in this year’s selection include: Global and personal politics, exemplified by Roei Greenberg’s photographs taken along the Israeli/Syrian border, George Stamenov’s re-imagining of post-Soviet era Bulgaria and Gender; and Sexuality, highlighted in Louis Blue Newby’s remake of David Cronenberg’s 1996 psycho-sexual thriller ‘Crash’ and Taylor Jack Smith exploration of male identity in his animations.

New Contemporaries selectors include Rana Begum and Sonia Boyce
Through her refined language of Minimalist abstraction, Begum blurs the boundaries between sculpture, painting and architecture. Her works absorb and reflect varied densities of light to produce an experience for the viewer that is both temporal and sensorial. Exhibitions include ‘A Conversation with Light and Form’, Tate St. Ives (2018); ‘Occasional Geometries,’ Yorkshire Sculpture Park, ‘Space Light Colour,’ Sainsbury Centre for Visual Arts, Norwich (both 2017); ‘The Space Between’, Parasol Unit, London and the 11th Gwangju Biennial, Korea (both 2016).

Sonia Boyce’s work incorporates a variety of media such as film, print, drawing, installation and sound. Her recent work also brings performers and audiences into sharper focus as an improvisational part of the artwork, demonstrating how cultural differences might be articulated, mediated and enjoyed. Exhibitions include ‘Sonia Boyce’ Retrospective at Manchester Art Gallery (2018); ‘We move in her way’, ICA, London (2017) and ‘All the World’s Futures,’ 56th Venice Biennale (2015).

Leeds Art Gallery Founded in 1888 Leeds Art Gallery has substantial collections of 19th and 20th-century British painting and sculpture, widely considered to be one of the best outside national groups. With half a million visitors every year, it is one of the city’s most visited attractions and all the exhibitions are free. Alongside the extensive painting and sculpture collection, the gallery presents a dynamic temporary exhibition