Last October I was in Doha the capital of Qatar which seemed like a well-oiled machine when it came to Art, Education, and Culture. I was there for the retrospective of the London-based Iraqi-born artist Dia Azzawi whose work can only be described as ‘The Picasso of the middle east’. His large Guernica-like black and white depictions of historic and recent atrocities are not only well painted and original but they also say something. The works are deep rooted in the unrest that has dominated the region since the 1960s. I also visited the awe-inspiring Richard Serra sculptures situated in the desert in a world heritage site. These are the largest of Serra’s body of work and seeing them was perhaps one of the greatest art epiphanies (if that is appropriate) of my well-travelled life. Doha has also played host to a Damien Hirst retrospective and a giant Urs Fischer stuffed bear greets you at the airport.

Doha is a boomtown but unlike Dubai, it has erected some of the most ambitious building commissions, by leading architects in the world. Jean Nouvel, IM Pei,  Rem Koolhaas’ studio OMA, Zaha Hadid, Arata Isozaki and Foster and Partners dominate the skyline. Doha is also building a University City which will house not only Hamad bin Khalifa University and Qatar University  but also campuses from University College London, Carnegie Mellon University College of North Atlantic Qatar, Georgetown University School of Foreign Service, HEC Paris, Northwestern University in Qatar, Texas A&M University at Qatar, University of Calgary-Qatar, Virginia Commonwealth University in Qatar, and Weill Cornell Medical College in Qatar. They also have a full-fledged artist in residence programme complete with impressive studios and a branch of Cass Art on the campus. An Art School will inevitably follow. When speaking to my guide he made no bones about the reasoning behind this phenomenal academic expansion. He said; “ For many years students were sent abroad for their education returning with western values, some considered corrupt”. By building this vast city for education it will attract students from all over the region promoting Arab values. 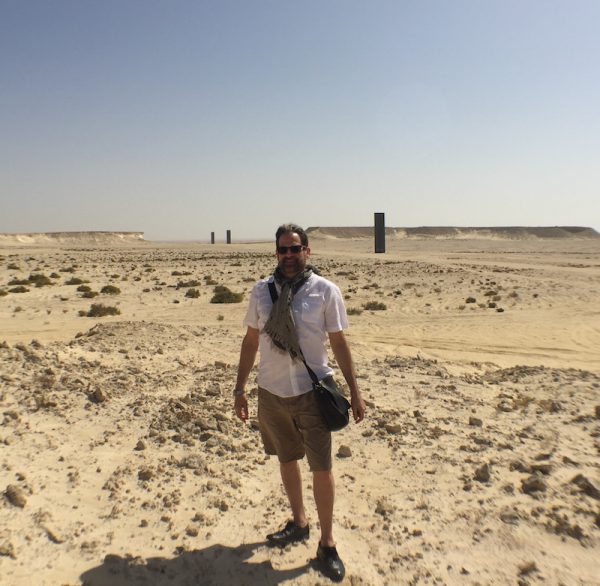 EAST-WEST / WEST-EAST BY RICHARD SERRA – SCULPTURE IN THE DESERT

Qatar is a very new player in the region. Before the 1970s there was very little there except a few wandering tribesmen and seasonal pearl divers. This all changed with the discovery of oil and natural gas (the third largest in the world). Before that, the main economy came from pearl diving which has been in operation since the nineteenth century. In 1877, William Palgrave recalled how Sheikh Mohammed bin Thani of Qatar had exclaimed to him that: ‘We are all from the highest to the lowest slaves of one master, Pearl.’ The city of Doha has grown at a startling rate and it is inhabited by a sophisticated international community. Now a partial blockade of Qatar by Saudi Arabia, Bahrain, the United Arab Emirates and Egypt looks to destabilise the country. Qatar is accused of supporting terrorism specifically the Muslim Brotherhood, an Islamist group considered a terrorist organisation. Libya, Yemen, and the Maldives have also joined the diplomatic boycott. Qatari officials have repeatedly denied these allegations.

Qatar appears to be caught in a cultural boycott. It is now under embargo to exhibit Qatari art in the countries mentioned above. In the past, the exchange was broad with many artists shown. Qatar’s Mal Lawal biannual exhibition is an Arab world showcase which puts on view private collections promoting a shared cultural heritage.

The FT stated it is a “dangerous power game playing out in the Gulf, where Saudi Arabia and its allies are blockading the minuscule but rich and ambitious emirate of Qatar “ They continued by  saying it is; “Setting off alarm bells around the world — except at the White House, where President Donald Trump tweets support for the Saudis, in the ostensible belief their action strikes a decisive blow against jihadi extremism”.

Meanwhile, regional officials and sheiks are now hammering out shuttle diplomacy, hoping to calm a situation that threatens to split apart the Gulf Cooperation Council, a bloc of six Arab monarchies that appeared to stabilise the region. Borders remain shut and flights are grounded. This raises the question, should culture be separated from politic? It also strikes me as a case of the ‘pot calling the kettle black’ as Saudi Arabia and other countries in the region are not immune to known links to terrorism.

This raises the question, should culture be separated from politics? It also strikes me as a case of the ‘pot calling the kettle black’ as Saudi Arabia and other countries in the region are not immune to known links to terrorism.

Qatar has embraced the inevitability that they will run out of fossil fuel and natural gas in the not so distant future. It has an ambitious programme of reinvesting much of its wealth into culture and education, which isn’t a bad thing. Others in the region seem jealous as a result.