This year the RA Summer Exhibition has returned to form with a talented lineup of artists chosen by an inexhaustible group of jurors. The 251st edition received over 16,000 entries, around 1200 works, in a range of media, which goes on display, next week. The majority of these artworks are offered for sale, allowing visitors to purchase original work by upcoming and established artists. Artlyst had a sneak preview yesterday and gone are the Kitschy paintings that we saw under Grayson Perry. The garish pink walls that Craig-Martin utilised and the distracting wave hanging of Tess Jaray. What replaces the gimmickry is a solid grouping of accomplished works of art.

The Scottish born painter Jock McFadyen RA who has coordinated the show, alongside the Summer Exhibition Committee, has built on the exhibition’s success. He recognises that it continues to provide a unique platform for artists at all stages of their career allowing them to present recent work. Jock told Artlyst: “I’ve created a menagerie. There’s a tradition of animal painting from Stubbs to the more amateur cat paintings traditionally submitted to the RA summer show. Our interest in depicting animals goes back to our first image-making in caves. But the truth is that you don’t know what is going to be submitted and it’s a committee decision. This year’s committee is made up of: Stephen Chambers, Anne Desmet, Hughie O’Donoghue, Spencer de Grey, Timothy Hyman, Barbara Rae, Bob and Roberta Smith, the Wilson twins and Richard Wilson, so it’s quite a cross section.”

Art Critic Sue Hubbard writes, Jock McFadyen is an artist who is not easy to pigeon hole. His work is eclectic, singular and raw. It reflects both the edginess of ‘real’ life and his intellectual concerns about the possibilities and fluidity of paint. He’s a rebel yet a conservative. A detail highlighted by the fact that he’s shown work in his East End Acme studio and at Wapping Project, as well as The National Gallery, Agnews and the Fine Art Society. He is that rare thing in the modern art world – an original. His vision is unique, idiosyncratic and muscular and reveals a detached humanity that throws light on the liminal and marginal aspects of the world we inhabit, which so many of us miss. As his friend Ian Sinclair says: ”the world is always static in the sense that you’re a mass observer and you can’t afford to care whether people are busy or not. You are a witness.”

One of the founding principles of the Royal Academy of Arts was to “mount an annual exhibition open to all artists of distinguished merit” to finance the training of young artists in the Royal Academy Schools. The Summer Exhibition has been held every year without interruption since 1769 and continues to play a significant part in raising funds to finance the students of the RA Schools.

The RA Schools is the longest established art school in the UK and offers the only free three-year postgraduate programme in Europe. As the world’s largest open submission contemporary art show, the Summer Exhibition provides a unique platform for emerging and established artists to showcase their works to an international audience, comprising a range of media from painting and printmaking to photography, sculpture, architecture and film. Royal Academicians are automatically entitled to submit up to six works to the Summer Exhibition and the rest of the exhibition features work by those invited by the committee and external entrants. The Royal Academy of Arts celebrates Art in Mayfair Following the Royal Academy’s 250th-anniversary celebrations last year. The Summer Exhibition will once again spill out onto the streets of London’s West End throughout the summer, as part of Art in Mayfair. Taking over Bond Street, the Royal Academician Sir Michael Craig-Martin CBE will decorate the street with an installation of flags displaying his artwork. 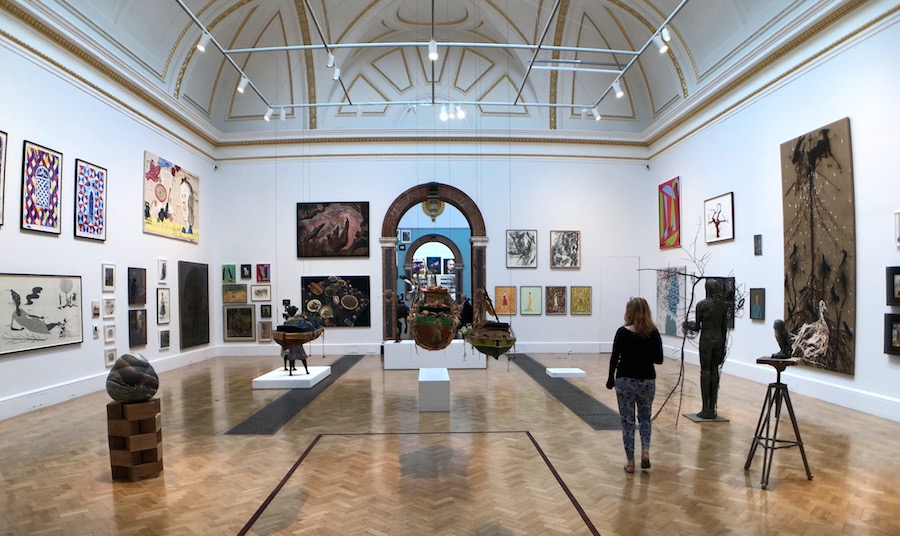 Highlights within the Main Galleries include a ‘menagerie’ in the Central Hall curated by Jock McFadyen RA, with works by artists including Polly Morgan, Banksy, Charles Avery and Mat Collishaw. Jane and Louise Wilson RA have organised two gallery spaces, one of which will showcase light and time-based work. Spencer de Grey RA will curate the Architecture Gallery, which will explore the theme of sustainability.

The celebrated artist Thomas Houseago will show a group of large-scale sculptural works in the Royal Academy’s Annenberg Courtyard that respond to the Academy’s statue of Joshua Reynolds, which has stood in the courtyard since 1931. This will be the first time that the courtyard will be dedicated to an artist that is not a Royal Academician as part of the Summer Exhibition.

The Summer Exhibition is the world’s largest open submission contemporary art show which has taken place every year without interruption since 1769. The members of the Summer Exhibition Committee serve in rotation, ensuring that every year the exhibition has a distinctive character, with each Royal Academician responsible for a particular gallery space. Works from all over the world are judged democratically on merit, and the final selection is made during the eight-day hang in the galleries.

A significant part of funds raised continues to contribute to financing the postgraduate students at the RA Schools.

Over £70,000 is offered in prize-money with accolades for every category of work in the Summer Exhibition:

The Royal Academy of Arts Charles Wollaston Award £25,000 awarded by a panel of judges appointed by the President and Council for the most distinguished work in the exhibition
The Jack Goldhill Award for Sculpture £10,000 for a sculpture

The Jerwood London Original Print Fair Prize £10,000 for a print in any medium The British Institution Awards for Students Two prizes of £5,000 and £3,000 for work across a comprehensive range of creative disciplines from painting to architecture

The Hugh Casson Drawing Prize £5,000 for original work on paper in any medium, where the emphasis is clearly on drawing. Rocco Forte Hotels Architecture Prize £5,000 for an outstanding work of architectural design
The BKI Architecture and Materials Prize £2,500 for a work celebrating material excellence The Sunny Dupree Family Award for a Woman Artist £4,000 for a painting or sculpture

The Arts Club Award £2,500 awarded to an artist aged 35 or under for a work in any medium except architecture Sponsor’s Statement Insight is exceptionally proud to continue its association with the Royal Academy of Arts’ Summer Exhibition. As the stage is set for its 251st year, Jock McFadyen’s appointment as coordinator shall ensure, without question, that the qualities of relevance, accessibility and modernity that define this unique showcase of contemporary art continue to challenge, inspire and endure.

King George III founded the Royal Academy of Arts in 1768. It has a unique position in being an independent, privately funded institution led by eminent artists and architects whose purpose is to be a clear, strong voice for art and artists. Its public programme promotes the creation, enjoyment and appreciation of the visual arts through exhibitions, education and debate.

The Royal Academy launched a new campus as part of the celebrations of its 250th anniversary year in 2018. Following a transformative redevelopment, designed by the internationally-acclaimed architect Sir David Chipperfield RA and supported by the National Lottery, the new Royal Academy of Arts reveals more of the elements that make the RA unique – sharing with the public historic treasures from its Collection, the work of its Royal Academicians and the Royal Academy Schools, and its role as a centre for learning and debate about art and architecture – alongside its world-class exhibitions programme. Royalacademy.org.uk