The UK Government has placed an export bar on ‘Ferme Normande, Été’ (Hattenville) 1882 by Paul Cézanne to allow time for a UK gallery or institution to acquire the painting. The privately-owned masterpiece had been on loan to the Courtauld Gallery in London since 1980.

Valued at £10 million, the work was once part of the most important collection of impressionist and post-impressionist paintings in the UK. The painting is at risk of leaving the country unless a UK buyer comes forward to save the work for the nation.

Ferme Normande, Été (Hattenville) is one of four depictions of Normandy sites that were particularly important to Cézanne due to its acquisition by his first major patron Victor Chocquet. It is a small, simple and sublime landscape which is an early example of the artist’s so-called ‘constructed brushstroke’.

Arts Minister Lord Parkinson of Whitley Bay said: Paul Cézanne was one of the most important post-impressionist painters and influenced the likes of Matisse and Picasso. This stunning work marks a critical moment in his career as his style and brushstrokes developed in a new direction. I hope a UK buyer comes forward so everyone can enjoy it for years to come.

The minister’s decision follows the advice of the Reviewing Committee on the Export of Works of Art and Objects of Cultural Interest. The committee agreed that it is a fascinating painting with an interesting historical connection to Samuel Courtauld’s collection. The painting is also significant in showing a transitional moment in Cézanne’s career, using brush strokes and shifting light that displays the artist’s developing style.

Committee Member Christopher Baker said: “Paul Cézanne (1839-1906) status as a bridge between the traditions of 19th-century painting and modernism is unrivalled. In his delightful ‘Farm in Normandy, Summer (Hattenville)’ the artist employed intense, free brushstrokes to evoke the dappled light, shadows and myriad green hues of trees and a meadow, anticipating later critical developments in his artistic evolution when the abstract structures underpinning nature were gradually given greater prominence. The picture is also significant in the context of the artist’s career, as the farm depicted was acquired in the year Cézanne painted it by Victor Chocquet (1821-1891), his first important patron and a key champion of impressionism.

“In addition to these themes, it forms part of the significant story of British taste for international art in the 20th century. Cézanne’s landscape was purchased in 1937 by Samuel Courtauld (1876-1947) as the last of a remarkable group of twelve paintings by the artist Courtauld acquired. He played a seminal role in establishing enthusiasm for impressionist and post-impressionist painting in Britain by collecting and generous funding of major pictures secured for the National Gallery in the 1920s.

“Because of its beauty, significance in the artist’s career, and role in the wider appreciation of such artistic achievements, it would be a profound misfortune if this beguiling work could not be retained in this country.”

The committee made its recommendation because the painting met all three of the Waverley criteria: being closely connected with our history and national life; of outstanding aesthetic importance; and of exceptional significance for the study of the development of Cézanne’s artistic style, as well as impressionist collections in the UK.

The decision on the export licence application for the paintings will be deferred for a period ending on Sunday, July 31 inclusive. At the end of the first deferral period, owners will have a considerable period of 15 Business Days to consider any offer(s) to purchase the painting at the recommended price of £10 million. The second deferral period will commence following an Option Agreement and last for six months.

Offers from public bodies for less than the recommended price through the private treaty sale arrangements, where appropriate, may also be considered by the minister. Such purchases frequently offer a substantial financial benefit to a public institution wishing to acquire the item. 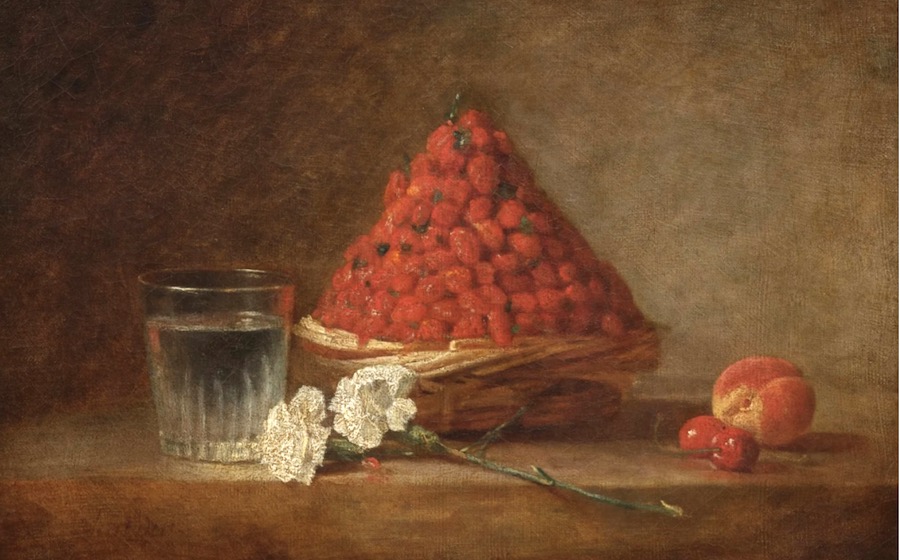 Chardin The Basket of Wild Strawberries

A still life painting by the 18th-century French artist Jean-Baptiste-Simeon Chardin which recently hit the auction block on March 23 at Artcurial Paris, has been refused an export licence and will now be offered to the Musée du Louvre after they expressed an interest in acquiring the artwork for its collection.

The work, titled The Basket of Wild Strawberries, sold for a staggering €24.4 million ($26.8 million), including premium.

Louvre director Laurence des Cars said she had requested the Chardin painting, Basket of Wild Strawberries, be classified by the state as “a national treasure,” a distinction that would prevent it from being exported out of the country.

A pre-emption would stop the sale of the painting for up to two-and-a-half years, allowing the museum time to raise funds to buy the painting.

Jean-Siméon Chardin was born in 1699 in Paris, the son of a cabinet maker. He spent his entire life in Paris. His first wife died in the fifth year of their marriage. Both of his daughters died young, one at the age of three and one at one. His son, Jean-Pierre, also a painter, was kidnapped for a time by English pirates off the coast of Genoa and drowned in a canal by his own will in Venice in 1772, at the age of 41. That same year Jean-Siméon Chardin had kidney stones.

“Chardin is the irrefutable witness who makes other painters look, liars.”

In 1728 Chardin was accepted into the Académie Royale de Peinture et de Sculpture. In 1742 he was quite ill and neither finished nor exhibited any paintings. In 1757 he moved into the Louvre, where he would spend the rest of his life. In 1770 he became the first painter to the king and the director of the Académie. He died on December 6, 1779, at the age of 80. In his estate, he held approximately 5,638 livres of furniture.

Marcel Proust wrote in 1895: “Had you not already been unconsciously experiencing the pleasure that comes from looking at a humble scene or a still-life, you would not have felt it in your heart when Chardin, in his imperative and brilliant language, conjured it up. Your consciousness was too inert to descend to his depth. Your awareness had to wait until Chardin entered the scene to raise it to his level of pleasure. Then you recognised it and, for the first time, appreciated it. If, when looking at Chardin, you can say to yourself, ‘This is intimate, this is comfortable, this is as living as a kitchen,’ then, when you are walking around a kitchen, you will say to yourself, ‘This is special, this is great, this is as beautiful as a Chardin.’ … In rooms where you see nothing but the expression of the banality of others, the reflection of your boredom, Chardin enters like light, giving each object its colour, evoking from the eternal night that shrouded them all the essence of life, still or animated, with the meaning of its form, so striking to the eye, so obscure to the mind. … an ordinary piece of pottery is as beautiful as a precious stone. The painter has proclaimed the divine equality of all things before the spirit that contemplates them, the light that embellishes them.”

Malraux wrote in 1951: “Chardin is not a minor 18th-century master who was more delicate than his rivals; like Corot, he is a subtly imperious simplifier. His quiet talent demolished the baroque still-life of Holland and made decorators out of his contemporaries; in France, nothing can rival his work, from the death of Watteau to the Revolution.”