Carolee Schneemann: Body Politics is the first survey in the UK of the work of American artist Carolee Schneemann (1939-2019) and the first major exhibition since she died in 2019. Tracing Schneemann’s diverse, transgressive and interdisciplinary work over six decades, the show celebrates a radical and pioneering artist who remains a feminist icon and point of reference for many contemporary artists and thinkers.

Addressing urgent topics from sexual expression and the objectification of women to human suffering and the violence of war, Schneemann’s work is concerned with the precarious lived experience of humans and animals. With over 300 objects, the exhibition draws from the Carolee Schneemann Foundation and numerous private and public collections, spanning the extraordinary range of Schneemann’s artistic output. Bringing together paintings, sculptural assemblages, performance photographs, films and large-scale multimedia installations, as well as rarely seen archival material including scores, sketches, scrapbooks, programmes and costumes, this exhibition positions Schneemann as one of the most relevant, provocative and inspiring artists of the last century. 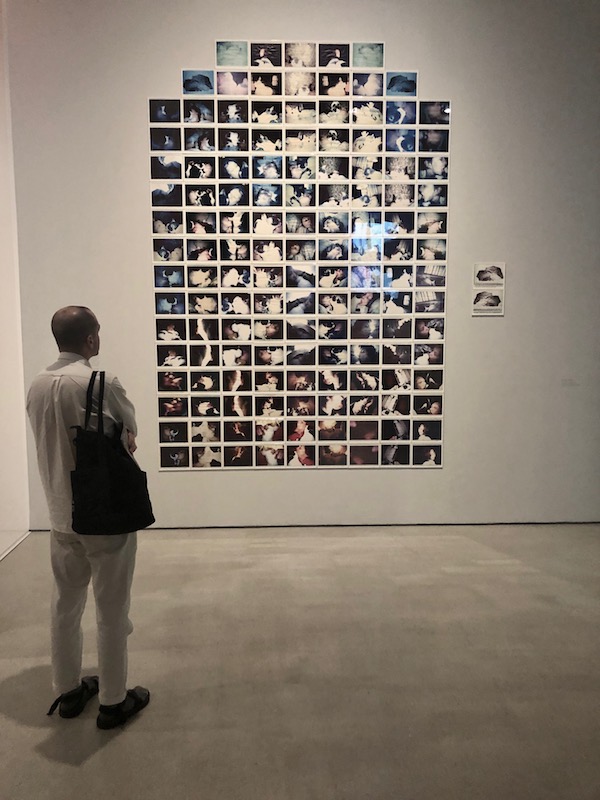 The exhibition’s title reflects that for Schneemann, the personal was political. She was engaged with an expansive kind of body politics, setting out to challenge the restrictive idea that the body and mind were divided. Schneemann took the sensory experience of her own body as a starting point – she understood her body as inextricably linked with its environment and others and recognised and challenged how history had defined the lives and bodies of women. However, Schneemann was not only concerned with the specifics of being a woman – in her writing in the 1970s, but she also reflected on the merits of finding ‘neutral’ instead of gendered terms and her body politics engaged with the abuse of power across global conflicts.

Schneemann was a trailblazer whose work defies easy categorisation. Although known predominantly as a performance artist, she was adamant throughout her life that she was foremost a painter. Opening the exhibition are the artist’s rarely seen early gestural paintings, including Aria Duetto (Cantata No.78): Yellow Ladies (1957) and Pin Wheel (1957), a kinetic painting activated by the potter’s wheel on which it is mounted.
In her early works on canvas, Schneemann grappled with the influence of American Abstract Expressionism and the sensory painting style of Paul Cézanne but remained frustrated by the heroised, male-dominated canon of art history. From the early 1960s, she sought to expand her works outside the frame’s limits, incorporating found objects and fragments from everyday life to produce ‘painting-constructions’ and ‘box-constructions’. For the assemblage Colorado House (1962), she slashed, ripped and reconfigured what she considered to be failed paintings, while for the diorama-like Pharaoh’s Daughter (1966), she filled a wooden box with glowing lights, slides of biblical scenes and mirrors.

The exhibition charts Schneemann’s radical work using her own body as a medium, often directly addressing the misogyny she experienced, the historical suppression of women and the taboos around women’s bodies. Key works include a series of photographs from Schneemann’s first solo performance, Eye Body: 36 Transformative Actions for Camera (1963), in which she staged a series of gestures amid a sprawling environment of materials.

For Up to and Including Her Limits (1976), she hung naked from a harness suspended in the corner of a paper-lined stage set, creating gestural abstract marks with crayons as she swung back and forth in a trance-like state. The resulting large-scale installation from the 1974 performance at Anthology Film Archives in New York is presented alongside video footage and extensive photographic documentation. One of Schneemann’s most powerful performances, Interior Scroll (1975 & 1977), is highlighted in the exhibition, the artist’s rallying cry against the persistent devaluing of the female body and intellect in a patriarchal society.

In the early 1960s, Schneemann lived in New York City and was embedded in the downtown scene. She became a founding member of the Judson Dance Theater, a group of avant-garde interdisciplinary artists including Yvonne Rainer, Lucinda Childs, Trisha Brown, David Gordon and Steve Paxton. She took everyday gestures and materials as their impetus.
Schneemann described her group performances as ‘kinetic theatre’, incorporating complex movement scores, sets, lighting, sound and technical innovations. Numerous performances are represented through photographs, films, scores, sketches, notes and costumes, including one of Schneemann’s most iconic performances, Meat Joy (1964). This epic group performance was conceived as a sensory celebration of flesh. Devised, as many of her works were, from images from her dreams, Meat Joy saw untrained performers (including a poet, balloon salesman and teacher) dressing and undressing and performing mass body exercises – skidding, rolling, leaping and twisting – among paper, paint, raw fish and chicken.

Carolee Schneemann: Body Politics presents Schneemann’s remarkable film work, in which she forged a new experimental language, exploring sexual desire, challenging the male gaze and taking her daily life and relationships with humans and non-humans (specifically cats) as source material. Landmark film Fuses (1964–67) is shown in its entirety, a self-shot portrait of Schneemann and her partner James Tenney having sex, with the cat Kitch as witness and companion. This radical piece, made for three years, celebrated heterosexual pleasure and set out to question, expand and complicate representations of the female body and sexuality, offering a new proposal for the expression of erotic experience.

A focused section of the show shines a spotlight on Schneemann’s formative time spent in London. The city provided the context for several of her experimental performances, including Round House (staged at the Roundhouse in 1967, as part of a line-up that included poet Allen Ginsburg, anti-psychiatrist R.D. Laing and Black Power activist Stokely Carmichael, among others), Naked Action Lecture (performed at the ICA in 1968), and ICES STRIP/ISIS TRIP (performed on roller skates on a train travelling from London to Edinburgh in 1972).

The exhibition’s final section includes a series of works that address the precarious nature of life and the politics of human suffering in the context of the Vietnam War, the Civil War in Lebanon, the terrorist attacks of 9/11 and the artist’s own fight with cancer. Schneemann’s film Viet-Flakes (1962–67) and the related performance Snows are some of the earliest anti-Vietnam War works – they confront the violence of military intervention while probing the experience of viewing anonymised images of suffering.

Known/Unknown: Plague Column (1995–96) reckons with Schneemann’s diagnosis of non-Hodgkin lymphoma and breast cancer whilst probing the misogynistic representation of women. Through these works and others, Schneemann confronts the profoundly personal experience of navigating the political and reflects on how we are implicated in the power structures embedded within society.