Tracey Emin has a new show titled ‘A Fortnight of Tears’ opening in early 2019 at White Cube Bermondsey. The exhibition chronicles recent developments in her practice. This significant exhibition spans the entire gallery and brings together new painting, photography, large-scale sculpture, film and neon text, all stemming from the artist’s deeply personal memories and emotions ranging from loss, grief, longing and spiritual love.

Three monumental, bronze sculptural figures, the largest Emin has produced to date, are shown alongside her lyrical and expressive paintings. Developed through a process of drawing, the paintings are then intensely reworked and added to, layer upon layer. 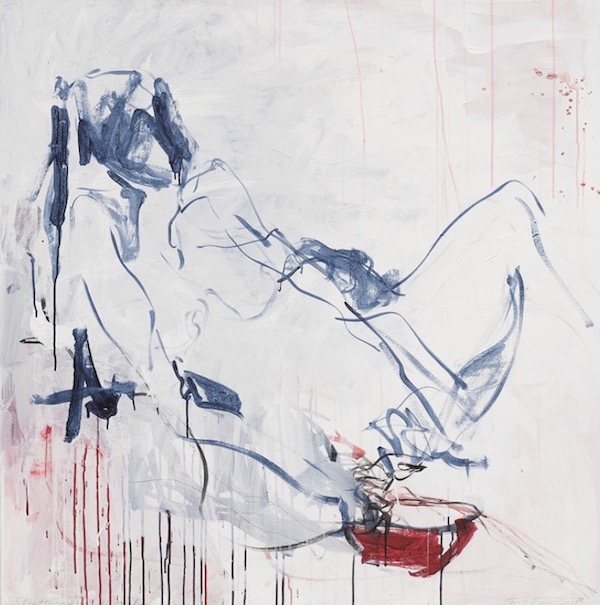 Tracey Emin, Sometimes There is No Reason, 2018

White Cube also debuts a new photographic series by Emin titled ‘Insomnia’. Selected from thousands of self-portraits taken by the artist on her iPhone over the last couple of years, these images spontaneously capture prolonged periods of restlessness and inner turmoil.

Filmmaking has been an integral part of Emin’s career for over 20 years. To mark this, the artist will show a new film as well as critical early work How It Feels (1996), a candid and moving account of her abortions that changed her whole approach to making art.

Tracey Emin was born in London in 1963 and studied at Maidstone College of Art and the Royal College of Art, London. She has exhibited extensively internationally, including solo and group exhibitions in Holland, Germany, Japan, Australia and America. Most recently, Emin’s work has been shown in the following solo exhibitions: The Memory of Your Touch, Xavier Hufkens, Brussels (2017), Surrounded by You, Château La Coste, Aix-En-Provence, France (2017), I cried because I love you, Lehmann Maupin and White Cube, Hong Kong (2016), Angel without You, Miami MoCA, Miami (2013) and a major survey exhibition Love Is What You Want, Hayward Gallery, London (2011). She has also entered her work into a series of acclaimed dialogues with the work of past masters she admires, most notably: Tracey Emin, My Bed / JMW Turner, Turner Contemporary, Margate (2017), In Focus: Tracey Emin and William Blake, Tate Liverpool, Liverpool (2016), Tracey Emin and Francis Bacon, Tate Britain, London (2015), Where I Want to Go, with Egon Schiele, The Leopold Museum, Vienna (2015). Tracey Emin represented the UK at the Venice Biennale in 2007 with the exhibition Borrowed Light and was elected to the Royal Academy in the same year. In 2011, she was appointed Professor of Drawing at The Royal College of Art, London, and in 2012 Queen Elizabeth II appointed her Commander of the Most Excellent Order of the British Empire for her contributions to the visual arts.